Who&#8217;ll bring home the metal from Cannes this year?

Who’ll bring home the metal from Cannes this year? 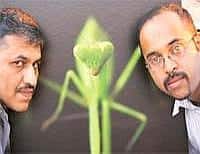 # Work that you have entered for the awards (if any):

“Help me read this" stickers from Contract Delhi. At every traffic signal in metros, we often see poor street children selling “bestsellers", English literature and English magazines. What Contract did was to put stickers prominently placed on those magazines covers saying, “Help me read this". This innovation was done for an NGO called Children of the World, which looks after the interests of street children.

Cannes is a lottery. Lady Luck is an important jury member. India has two sure

#Work that you have entered for the awards (if any):

Not sent this year (because BBDO India has just been launched here).

I think that the O&M commercial for Neo Sports’ Gas should win. There’s some great acting, there’s a surprise element to the ad and it’s a great take on tension

# Work you have entered for the awards (if any):

We have done some ambient work for HappyDent (posters) titled “My Great Grandfather" where we have shown an old man, and in the place of his dentures are real light bulbs which glow in the night.

In addition, we have a multimedia (across print, outdoor and TV) campaign for Parachute called Gorgeous Hamesha that we are optimistic about. We’ve also done a TV ad for Chevrolet Octra, which shows what all you can do if your one hand is free (like relaxing or going to the beach), while the other hand drives the car. Then there is a radio spot for Chevrolet Yuva that’s been done by us, with the baseline “Need more space", which shows that in a car with uncomfortable seating, you tend to notice the not-so–positive things about the person sitting next to you. It’s a hilarious ad.

The Reynolds print advertisement is a strong contender. It shows twins sticking out their tongues and the only thing that distinguishes one from the other is the mole made on one kid, with the help of a black marker. A simple idea, but there’s a lot of joy in it. The Times of India (ToI) integrated campaign was an innovative thought. ToI tried to identify India’s future leader and the candidates were ordinary people whose leadership skills were untested. They were given a problem (a social problem) and were asked to solve it. The guy selected was sent to Oxford for political training.

The Titanium category is one area where we are far behind, so this one is a good contender.

Neo Sports has a commercial called Gas, which captures the tension in a cricket match perfectly. The commercial keeps you on your toes.

# Work that you have entered for the awards (if any):

Well, we have entered Chi Charlie and Hitler for Luxor highlighter pens, which has pictures of these people done by Luxor.

The ad shows the product benefits upfront. Also, we have sent the Perfetti Cream face ad, which has been positioned as candy that has a lot of extra cream.

Here’s how the ad runs: The commercial shows a guy who’s bossed over by his wife. She’s told him to water the garden. What our man does is to bring out Perfetti candy, and show it to his mom-in-law. Her mouth waters. And next you see the garden being watered. Baseline: Extra cream, your mouth will water.

I think Luxor has a strong chance. And so does the Eno stomach campaign from O&M. Getty from Leo Burnett and Amway from Rediff are the other favourites.

Getty is amazing typography where letters are made to look like people who are getting killed.

Amway is a graphic illustration of birds in the sky that cover the whole picture for car cleaning liquid. All of them are fresh, surprising and make you rethink about what an ad should look like and do.

# Work you have entered for the awards (if any):

Birla Sun Life is an ambient idea for car loans that actually shows a real car cut up to slices to drive home the benefit of easy instalments.

Sulekha is a huge online content generation idea that encourages people to literally tear up the competition for the world’s largest online yellow pages.

Lux is for a fragrant black soap that shows beautiful floral formation made entirely of feminine body parts.

Reynolds is the twins’ ad that won gold at Goafest and One Show.