Facebook emerges as the top traffic referral source, edging past the biggest and most popular search engine Google, according to the report

New Delhi: Even as digital majors Facebook and Google jockey for influence and profits, new data released by Parse.ly, a major web analytics provider for digital publishers, could prove to be a gamechanger for not only the two companies but the entire landscape of digital media. Facebook emerges as the top traffic referral source, edging past the biggest and most popular search engine Google, according to the latest Authority Report published for the period May-July 2015 by Parse.ly. 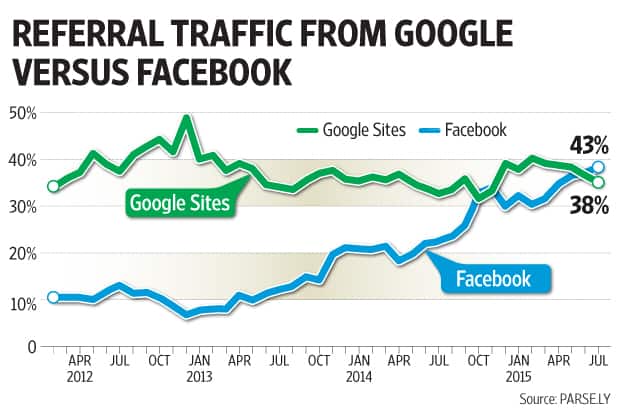 Traditionally and until very recently, organic search dominated as the top traffic referrer online. But Parse.ly’s data now clearly shows that social media has pipped search to the post. Social media sources, of which Facebook is the largest, accounted for about 43% of the traffic to the Parse.ly network of media sites, while Google Search accounted for just 38%, as of July 2015.

The numbers may not accurately reflect the entire digital media universe considering that they only relate to Parse.ly’s network of clients. However, that list includes more than 400 major news and media outlets, including traditional publishers such as Wired, The Atlantic, Reuters and The Daily Telegraph, as well as a large group of digital-only outlets such as Mashable, The Next Web and Business Insider. Collectively, the network accounts for about 6 billion page views and more than one billion unique visitors per month. Thus, the Parse.ly data can by no means be ignored and reflects changing trends in the media world.

It is indicative of how social media is gaining as a traffic source as compared to search, which was traditionally seen as the only source of news. Content marketing hub Shareaholic reported that social media is now the #1 driver of all website referral traffic. As of December 2014, 31.24% of all referral traffic was from social media. The difference is notable when compared to 22.71% from the same period in the previous year. Correspondingly, search engine referrals (Google and Google sites) saw a relatively steady downward progression.

Today, social referrals (links that are shared on social networks like Facebook and Twitter) are crucial to a website’s traffic and Parse.ly’s report proves that digital media sites and networks are relying more on Facebook as a referral source than Google.

Does this mean then that search has hit a plateau? Will Facebook’s share of traffic referrals continue to grow? Traffic numbers are highly unpredictable and can fluctuate, but it is time someone at Google’s headquarters in Mountain View started thinking about Google’s future in Search.