Mumbai: Broadcast network Star Group Ltd, which exited a joint venture with Balaji Telefilms Ltd and is looking to sell its 25.99% stake in the television production house, has now decided to scrap three soap operas being produced for it by Balaji. 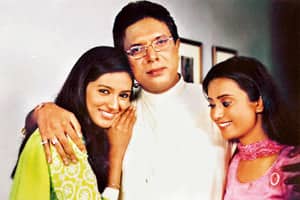 Off air: A still from ’Karam Apnaa Apnaa’, one of the serials produced by Balaji Telefilms to be dropped. Pallavi Subhash / HT

Television and media industry executives familiar with the matter say the loss of Star business on the five serials could erode Balaji’s revenue significantly.

Mint couldn’t independently ascertain how much these shows contributed to Balaji’s revenue.

The top-rated show among the five in January was Karam Apnaa Apnaa, with a 1.2 viewership rating, according to media agency Mediaedge: cia, part of GroupM India Pvt. Ltd. Comparable numbers for the top-rated programme weren’t immediately available but in 2008, the top show on general entertainment channels boasted ratings of around 8.

Shares of Balaji ended trading on the Bombay Stock Exchange on Tuesday at Rs39 each. The shares are 82.89% off their 52-week high of Rs228.

Balaji Telefilms rose into prominence with shows such as Kahani Ghar Ghar Ki and Kyunki Saas Bhi Kabhi Bahu Thi, which ran on Star Plus and became top-rated shows at the time.

In 2004, Star bought a 25.99% stake in the company. Last year, the network offered Balaji promoters an option to buy back these shares. Star and Balaji had also announced a joint venture in April 2007 to launch regional language entertainment channels. The venture fell apart last year.

Mint has previously reported that Balaji is now talking to a consortium of investors to buy Star’s stake. “At the moment, there is no development on the stake matter," said the Star executive.

An executive from a rival production house says the scrapping of the shows will hit Balaji hard. “Their main problem is that they were relying too much on Star. They have very few shows running on the other channels. Channels have been delaying payments to them and even shows on NDTV Imagine such as Bandini are not performing very well for them in ratings."

Balaji will have to rethink strategy on programming, added the executive at the rival production house.

“Star’s shows have not been doing exceedingly well, but they’ve not been doing badly either. I think it’s a case of too much fragmentation in the general entertainment space. Players are almost neck-to-neck with each other."