Hyderabad: Veteran batsman V.V.S. Laxman, one of the mainstays of the Indian cricket team’s middle order for 16 years, announced his retirement from international cricket on Saturday, saying it was time to make way for the next generation. 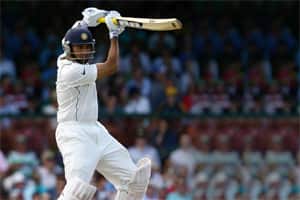 “I have always kept the country’s success ahead of personal aspirations. I think it is time to give youngsters a chance at home ahead of a tough season.

“But I would like to thank the almighty for allowing me to live my dream of playing for India."

He also scored 2,338 runs in 86 one-day internationals with six hundreds, but had not been part of India’s limited-overs squad since 2006.

Laxman decided to call it a day even though he was included in the Indian squad for the two-Test series against New Zealand starting in front of home fans in Hyderabad on Thursday.

“Till last night, I was unable to make up my mind, but in the end I listened to my inner voice and arrived at my decision to retire," he said.

“I informed the chairman of selectors (Krishnamachari Srikkanth) this morning that I am not going to continue playing for India. I also spoke to many of my team-mates.

“They were surprised that I was retiring before the series. It was all very emotional."

“Not many batsmen made batting look as easy as VVS Laxman. He was an exceptional cricketer, who excelled in pressure situations. The classic innings that he essayed in crisis situations shaped the history of Indian cricket, none more so than the 281 against Australia at Kolkata in March 2001," the Board Of Control For Cricket In India (BCCI) president N. Srinivasan said in a statement.

“If a cricketer’s greatness is to be measured in terms of his performances against the best opposition of his time, then Laxman stands right at the top. His record against Australia, the world’s No. 1 team for the better part of his career, speaks for itself."

Srinivasan said Laxman will be missed and wished him luck for future.

Laxman was retained for the Kiwi matches despite failing miserably in the last two Test series in England and Australia, both of which India lost 4-0 and were dethroned as the No. 1 Test side.

“No one likes to lose, so of course it was very disappointing to lose those two series very badly," said Laxman. “But it happens in sport. Hopefully, the team will avenge those defeats this season."

Both England and Australia are due to play four Tests each in India on either side of the new year.

Laxman is best known for his majestic 281 against Australia at the Eden Gardens in Kolkata in March 2001, when India turned the tables on the world champions after being made to follow-on 274 runs behind.

When India struggled at 232-4 in the second innings and faced certain defeat, Laxman and Rahul Dravid (180) put on a match-winning partnership of 376 to help their team post 657-7 declared.

Steve Waugh’s Australian side, set a target of 384 runs, folded up for 212 in their second knock, following a six-wicket haul by Harbhajan Singh, to leave India improbable victors by 171 runs.

Laxman’s 10-hour masterclass, which contained 44 boundaries, is often regarded as the best match-winning innings played by an Indian batsman.

Laxman is the fourth senior Indian cricketer to retire in the last four years, leaving Sachin Tendulkar the last of the veterans to hold fort in a period of transition.

Anil Kumble and Sourav Ganguly retired within a month of each other in 2008, while Dravid called it quits in March this year.