Mumbai: From scare to smile. Indeed these are the words to describe Saurav Ganguly-led Kolkata Knight Riders’ victory over defending champion Deccan Chargers by 11 runs in the opening match of the third edition of Indian Premier League in the Maharashtra capital on Friday.

KKR managed to have a worst possible start to their third IPL campaign when opener Manoj Tiwary was out to the first ball, clipping Chaminda Vaas to Rohit Sharma, while Ganguly lasted only three balls before edging a superb out-swinger off the left-arm bowler to first slip fielder Anirudh. 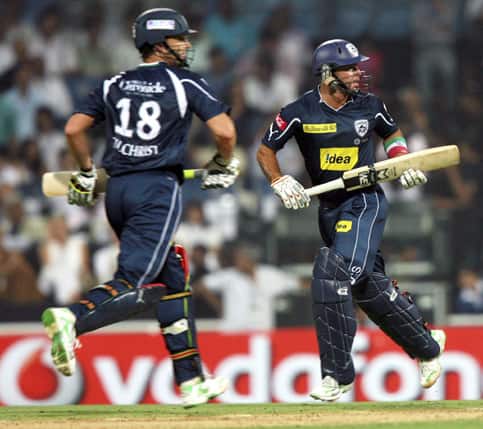 Trot, trot: Deccan Chargers captain Adam Gilchrist (L) and Gibbs running between the wickets during the first match playing between Deccan Chargers and Kolkata Knight Riders in the opening session of the IPL season 3 at the D Y Patil Sports Stadium in Navi Mumbai on Friday. Shashank Parade / PTI

Vaas grabbed two wickets in his opening over without conceding a run to give Chargers a splendid start to their campaign.

Cheteshwar Pujara (10) and Hodge (13), who watched departures of Tiwary and Ganguly from the non-striker’s end, repaired the damage to some extent by taking the score to 31 before being dismissed in the space of four balls.

Pujara fell to the left-arm pacer by driving a fuller length ball straight to mid on fielder Pragyan Ojha. He faced 16 balls and hit two fours.

Hodge was looking good when he fell to Jaskaran Singh as he was grabbed at backward point by Gibbs. Hodge struck a six and a four.

Hodge’s departure pushed KKR firmly to back-foot before Shah and Mathews, who was lucky to see his attempted hook sail behind wicketkeeper for a six, prevented further damage.

Mathews reached his half-century off only 28 balls with the help of four fours and three sixes while Shah was slightly behind him, needing 43 balls to complete his half-ton that included three fours and two sixes.Mathews scored an unbeaten 65 while Owais Shah remained not out on 58.

Besides Vaas, RP Singh and Jaskaran bagged a wicket each for Chargers.

Batting second Chargers skipper Adam Gilchrist made a breezy 35-ball 54 but the rest of the members who batted failed to match the captain’s pyrotechics. The defending champions lost wickets steadily and with that the match too. Chargers failed to surpass the KKR score of 161 for four as they were restricted to 150 for seven at the floodlit DY Patil Stadium.

Gilchrist, who struck three fours and as many sixes, powered Chargers in the company of VVS Laxman (22 off 14) to 61 for the first wicket and then to 99 before pulling a long hop from counterpart Brad Hodge (1/14) to deep square leg to depart.