Thanks for Visiting Mint
You seem to have an Ad Blocker on. Please turn it off in order to continue, or whitelist Mint
HOW TO TURN OFF AD BLOCKER
OR
REFRESH IF YOU ALREADY TURNED OFF THE AD BLOCKER
Home >Industry >How Anupam Poddar&#8217;s art obsession became a museum

New Delhi: Anupam Poddar had a living room once.These days the sofa is shoved into a corner, and the rest of the big square space is taken up by a life-size model of an antique cream-coloured Jaguar with a giant mechanical dinosaur mounting it from behind. On the dining table sits a row of exquisitely delicate sculptures made of human bone and red velvet. A video installation has found a home above a bathroom tub.

For Poddar, 34, buying art long ago stopped being a question of what to hang on which wall. Installations, many of them large and provocative, squeezed themselves into each room, across the garden, in the driveway and in every lavatory.

“It just took over my life. I had to throw out most of my furniture," Poddar confessed. “It became an obsession. The term hobby is too tame. It almost controls you." 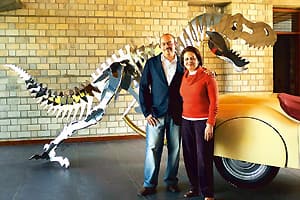 Proud owners: Anupam Poddar and mother, Lekha Poddar, stand next to an installation made by an Indian artist at their house in New Delhi. The two are among the leading collectors of contemporary art from India. Photograph: Tomas Munita / NYT

Spread over two floors and 7,500 sq. ft in an office tower, the Devi Art Foundation, as it is called, is due to open on Saturday, with an inaugural show of photography and video called Still Moving Image. It features the work of 25 artists, a fraction of the roughly 2,000 contemporary pieces that make up Poddar’s collection, along with an estimated 5,000 folk and tribal pieces, which are his mother’s passion.

India is bursting with commercial art galleries, but Devi is poised to be what the Poddars’ home has been for many years: a non-commercial, nonprofit exhibition space for contemporary art from India and the subcontinent. Yamini Mehta, director of modern and contemporary Indian art at Christie’s auction house in London, described it as “a truly ground-breaking first for India."

In a way, Devi (www.deviartfoundation.org) is the natural next step for a country awash with new wealth, soaring art prices and a prolific crop of artists and collectors. Think of it as India’s turn to do what the US did in the early 20th century, when wealthy patrons came together to give birth to some of the most important American cultural institutions. India is not there yet, cautions Vishakha N. Desai, the India-born president of Asia Society in New York, but perhaps heading in that direction.

“I would very much hope that like-minded people will come together to build larger civic institutions that go beyond any individual collector or founder," Desai said in an e-mail message.

A modern art museum is also under way in the eastern city of Kolkata. Herzog and de Meuron, the Swiss architecture firm that built the Tate Modern in London, is designing it. Construction is to start next year, and the museum is to open in late 2013, said Rakhi Sarkar, a collector there and one of the driving forces behind the museum.

To be sure, there have always been art collectors in India, from erstwhile royalty to the old Indian business families such as the Poddars. But the last decade of economic growth has thrust many new buyers into the art market, spurred on art funds that invest in paintings as one might in, say, soya bean shares, and in turn sent prices shooting up almost overnight.

All the while, a handful of wealthy Indians have been collecting with serious, singular purpose. Harsh Goenka, who heads a family-owned conglomerate based in Mumbai, has a special yen for portraits. Priti and Priya Paul, sisters who run the Apeejay Group of businesses, have built on their family’s collections: Priti’s passion is video art, while Priya’s is popular art such as old calendars, advertisements and film memorabilia.

The birth of the Devi Art Foundation signals a sort of turning point in the Indian art scene, in that it opens up a private family trove to the public and is devoted entirely to contemporary art.

The Poddars are known in the art world here for their daring eye, for seeking out artists before they start fetching high prices or become recognizable names at fashionable Delhi dinner parties.

Poddar scouts art college graduations for new talent, though it must be said that many of the artists he sought out years ago, like Subodh Gupta and Sudarshan Shetty, are now among the most recognizable names at those fashionable parties.

“While most collectors in India still ‘buy with their ears,’ " said Peter Nagy, a transplanted New Yorker who runs the Nature Morte gallery here, “the Poddars have always listened to their hearts and brains and have never been afraid to be independent in their choices."

Poddar, whose day job is running an upscale hotel company, admits to being inspired by his mother, who began collecting modern and folk art several decades ago.

Except that the work his mother sought out, including pieces by the post-Indian-independence generation of artists known as the progressives, did not resonate with the son. He gravitated towards artists of his own generation. “Their vision of India was similar to mine," he said. “It was being part of this—I hate this word—global world. It wasn’t just India. It wasn’t so isolated. They were working with sculpture, installation, with new media."

His first acquisition, in 1999, was a life-size pink fiberglass cow by Gupta. “It was quintessentially Indian but modern in its essence," he said. “That’s what spoke to me."

The obsession flowered quickly. Each room became a gallery devoted to one artist. Bharti Kher’s work now takes up his mother’s bedroom, including an elephant covered in squiggly, sperm-shaped bindis, which Indian women use as adornments on the forehead.

The jaguar-dinosaur in the living room is a 2006 piece by Shetty that Poddar describes as “an overgrown toy." With the flick of a switch, the dinosaur’s heart throbs and it mates with the jaguar. Gupta made a cow-dung cave that sits in the dining room. Poddar said it stank when it first arrived, freshly assembled. Sometimes her dog nibbled on it.

Poddar acquired the bone and velvet series, by Anita Dube, from its previous owner, whose family did not want it displayed at home, which is understandable. One of the pieces is a human rib cage fashioned into a bordello-style red velvet fan. It found pride of place on the dining table here—in a vegetarian household, no less.

Art, Poddar is fond of saying, is something you have to live with no matter how provocative. “You can’t avoid it. Also, it’s not safe." Sometimes, he said, he wonders why he hadn’t taken up gardening instead.

The government-run National Gallery of Modern Art, which has sites here and in Mumbai, only rarely shows contemporary work. At Devi, the schedule next year includes a show of Pakistani art and one of folk and tribal art from across India.

“There is no commercial angle," Poddar said. “We don’t have to be afraid."