New Delhi: It’s not difficult to find Sushil Kumar’s house. A few minutes after leaving Najafgarh behind on the dusty, potholed Nangloi road, a slightly asymmetrical three-storeyed white house is marked by a signboard that reads “World Champion Olympic winner Sushil Wrestler". A large billboard of Kumar hangs from the third floor, covering almost a quarter of the façade. Vehicles slow to a crawl here, people point to the billboard or just stare before speeding away, leaving a trail of dust.

It’s the eve of Kumar’s scheduled fighting day at the 2010 Commonwealth Games, and his house in Baprola, a small village on the outskirts of Delhi, is filled with relatives and friends. Every wall has posters and pictures of Kumar. The display cabinets in the living room are lined with hundreds of medals and trophies. Kumar’s Olympic bronze is the centrepiece. Diwan Singh Solanki, Kumar’s father, is endlessly offering tea to people, and the conversations are all centred on the Games. The TV is showing Sania Mirza’s match against Australia’s Anastasia Rodionova in the women’s singles final. When it cuts to the wrestling venue to show Yogeshwar Dutt’s gold-medal bout, a muted cheer goes around. Dutt races to victory against Canada’s James Mancini in the 60kg Freestyle event. “Look at that," Diwan says, “This one’s a really good fighter." 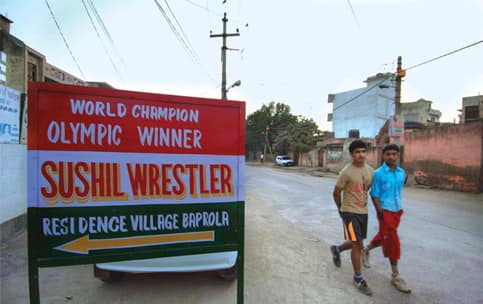 Badge of honour: The signboard outside Kumar’s house and (left) his Olympic medal. Pradeep Gaur / Mint

“We are winning everything in wrestling anyway," says Kumar’s mother Kamala Devi, “even in Greco! Have you even heard of Greco before? Our women wrestlers are also winning now. Before Sushil’s Olympic medal, did anyone care about kushti? Now they are showing wrestling instead of Sania’s tennis match."

Diwan discusses the ticket situation with the others in the room. Too many people have failed to get tickets, he says. “I bought Rs35,000 worth of tickets myself, and distributed them in the village," he says.

Kumar’s mother will not be one of those with a ticket though.

“Someone has to stay in the house, right?" she says. “Then I also have to milk the buffalos and wash them. Who’s going to do that?" Kamala Devi has never seen her son fight, except on TV. Neither have any of the other women there, mostly Kumar’s aunts.

Just then, a drunken man walks into the house. “I’ve come to see pehelwanji’s parents. I want to touch your feet, I want to wish you all the best," he slurs.

Diwan invites him to sit down and asks Kamala Devi to make some tea.

“He must be crazy! She laughs inside the kitchen. “Inviting drunkards who walk in and start taking pehelwan’s name! You don’t know how many random strangers walk into the house, and he doesn’t even live here."

At seven, all the women in the house walk to the nearby Shiv mandir, led by Kumar’s mother. They pray for a good result for Kumar, light diyas, and wash the shivling with water. When they return, a friend of the family walks in, another person who’s had a bit too much to drink. “I saw a dream," he declares loudly, “in which a voice told me in English ‘gold for Indian wrestler Sushil Kumar, of village Baprola, is sure and certain. Sure and certain.’" The room erupts in laughter.

Is no one nervous?

“No, no, there is no room for being nervous." Says Diwan. “For us, it’s all reason to celebrate. We are happy that we will go and see him in the stadium."

Over dinner (a large bowl of dal, a large bowl of chickpeas, salad, about 100g of home-made butter, an oversized mug of lassi, and round after round of rotis), Diwan tells us that he didn’t put Kumar’s younger brothers Amarjeet and Manjeet into wrestling because “it is better to concentrate on one person, and take him as far as you can. Everyone in the family is happy to support him, and help him," he says. “Sometimes I feel he began wrestling in his mother’s womb," Diwan laughs.

Kumar’s training began exactly where we are sitting and eating, Diwan says. There was no house here then, just the Solanki family’s buffalo shed. “Lots of space, lots of mud, perfect for training."

After a year’s basic training, Diwan took Kumar to Chatrasaal stadium, where Satpal Singh, a wrestling legend who won gold at 1982 Asian Games, trained promising youngsters. Kumar was 13 then, and has been living at various training centres ever since.

Kamala Devi says she was sad when Sushil left the house, but his achievements have more than made up for it. “His training centre was not very far either. So everyday his father would take milk and butter from the house for him," she says. “Our family has always remained close."

“You know what we are most proud of? Asks Diwan, “That Sushil is uncluttered in his thinking. He keeps his focus on wrestling. I had to scold him repeatedly that he should wear proper clothes at all these ceremonies and events he is invited to now. Otherwise he will go to meet Sonia Gandhi in a tracksuit."

Road to victory: (clockwise from top left) Residents of Sushil Kumar’s village Baprola gather at the wrestler’s house on the morning of his fight. Pradeep Gaur / Mint; Kumar’s mother Kamala Devi (centre) and aunts perform a puja for Kumar on the eve of his fight. Pradeep Gaur / Mint; Kumar takes a lap around the wrestling stadium after winning his maiden gold at the Commonwealth Game. Manvender Vashist / PTI; Kumar’s father Diwan Singh Solanki trained the world champion wrestler from childhood to continue a family tradition. Pradeep Gaur / Mint; Sushil Kumar at 13, when he was put into Satpal Singh’s (right) akhara at Chatrasaal stadium in Delhi.

After dinner, Kamala Devi takes us to the ancestral house where Kumar actually grew up, a five-minute walk from their house. Kumar’s first cousin Sandeep Solanki lives in it now with his wife, children and mother. The TV, as expected, is tuned to the Games. Sandeep had also started training with Sushil under Diwan as a kid, but had to give it up when his father died. “One thing about Sushil few people know is that no one has ever beaten him twice. Even in training, if you beat him once, next time he’ll know how to take you down."

Diwan says Sandeep’s son Ruddar, who is three years old, will be the next wrestling champion from the family. “My father Chowdhury Hoshiar Singh was a wrestler too, so it’s a family tradition—every generation should produce at least one wrestler," he says.

“Look at his enthusiasm and his energy," Kamala Devi elaborates. “See how he is constantly bouncing around with confidence. These are all signs."

The next morning, people start arriving at Kumar’s house by 5.30am. By six, the living room is packed; people are standing in the courtyard, and out on the street. Almost none of them have seen Kumar fight in an international competition.

“Only at a dangal (the traditional mud-pit arena)." Says a neighbour.

Everyone is talking at the top of their voice, laughing, joking, and discussing how to get to the venue. Most people head off to the nearest metro station in bikes and cars. Diwan leaves in a motorcade of five cars, driving a white Honda city himself, and chain smoking bidis. “They won’t let you smoke at the venue."

All the people in the village, including Kumar’s family, are carrying Rs100 tickets, the cheapest ones, so they can sit together. At the Indira Gandhi stadium, the wrestling venue, the Baprola crowd is boisterous. An old Baprola resident spots Diwan and rushes to him, asking for tickets. “Tau, I have none. What can I say?" The road leading to the stadium is filled with people in white dhotis and kurtas, the Haryanvi man’s default uniform, and with super-sized men from the various akharas of Delhi and Haryana.

When Sushil fights, the stadium is packed. The roar of the crowd drowns out everything, including the announcer’s voice. Kumar’s fights though are over in a flash. His first opponent lasts 40 seconds; his semi-final takes all of nine seconds, as Kumar finishes it off with his first move of the bout. Kumar doesn’t concede a single point in the final either.

The next day, Kumar says he has never seen a crowd like that at a fight before. “I was a little nervous," he says, “and suddenly I could feel just how high the expectations were. But I managed to blank that out, and when I won, it was just a fantastic feeling to look around and see so many people cheering for me."