Is the missing ‘chain of custody’ to blame?

New Delhi/Kolkata/Mumbai: Whether or not Bengali artist Somnath Hore really made the 20 bronze sculptures on display at New Delhi’s Gallery Espace may never be known. Gallery owner Renu Modi is resting her case on legal documents and the assessment of a respected critic. The family member originally in possession of the pieces insists they are real, but suspects they were rejected.

Hore’s family and other art experts base their assessment that they are fakes on their knowledge of the late sculptor and his unique style. 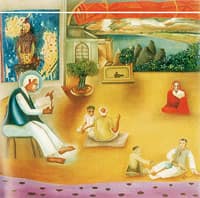 An image of a fake Bhupen Khakhar painting at Christie’s

In the recent Hore case, the chain of custody—or the provenance, as art experts term it—is complicated and ends with a nephew of Hore’s, Sugoto Majumdar. Majumdar’s mother was Hore’s sister.

Interviewed at his Kolkata home, Majumdar said that after his father’s death in 2002, he found 22 sculptures in his father’s house. He held on to them until a few months ago, when he met Manoj Patra, who described himself to Mint as a collector and salesman of old furniture and antiques. Modi showed Mint documents she said were signed by Majumdar, which also mentioned “M. Patra". He initially denied signing anything. In a subsequent interview with Mint, the gallery threatened legal action against him. Majumdar then called Mint to say he had signed a gift deed to Patra, but never certified that Hore made the sculptures. 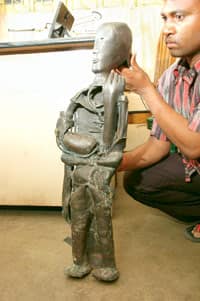 “My name has been unnecessarily drawn into this," said Majumdar, who said the pieces were likely first drafts of Hore’s works, or rejects, because they were not of exceptional quality. Once all of this is over, “I am going to pack them in a trunk and send them to Reba Hore. I am sick and tired of getting drawn into this controversy", he added.

Hore, like other Indian artists, did not see the value of his work go up during his lifetime, and would often give his work as presents to friends and relatives, said artists and other people who knew him, bolstering the gallery’s case. But Hore’s daughter, Chandana, says her father kept exhaustive records, and there is no proof of sculptures given to Majumdar’s relatives.

Caught in between, with the reputation of her art gallery on the line, is Modi, who said Majumdar’s documents clinched the deal for her. “I may not be an authority on Somnath Hore, but I asked Ella Datta (a New Delhi art critic) to come and take a look; she was happy with them too," said Modi, who was interviewed in her office in the presence of her lawyer and a curator for the gallery. “If I had wanted to make money, I would have sold them quietly."

The case echoes several recent high-profile incidents of fraud involving Indian artists, whose work in the last decade has gained value. Of the 145 lots in the September show of South Asian art at New York auction house Christie’s International, at least four paintings were withdrawn after allegations of fraud.

The cover lot, a Bhupen Khakhar piece, I, Me, My Village from 1978, estimated worth between $200,000 and $250,000, drew criticism during an initial showing in New Delhi. A Khakhar expert and art historian from the US, pointed out discrepancies to Christie’s, which had placed that piece on the cover of the auction catalogue.

“Whenever there’s any doubt about any work or object, and if we aren’t able to clarify, we withdraw the item immediately," said a Christie’s spokesperson. “In the case of the Bhupen Khakhar piece, we had the canvas tested and it was consistent with the stated age of the piece. If it was a fake, it shouldn’t have been of the same age."

Christie’s said it is conducting further research and hopes to reoffer the piece for sale. The source of the piece is similar to the recent Hore case; Christie’s says it got the work from?someone?who?got ?the? painting directly from Khakhar.

But the Khakhar canvas wasn’t the only one to be removed. The same Christie’s sale threw up suspicions about two more pieces: lot 92, an untitled landscape by Ram Kinkar Baij ($4,000-6,000), from the private collection of an American collector, and lot 109, Landscape (Church), an oil on canvas by Francis Newton Souza (estimate $80,000-100,000), dated 1961. Those pieces were also withdrawn.

Archivists in India say they have run into issues trying to create dependable and exhaustive records of the works of even artists who are currently alive. Some have not even saved leaflets or handouts from all their shows, and rarely photograph their work.

Modi, the art gallery owner, said she owned a 40-year-old piece by one of India’s most famous artists, Maqbool Fida Husain, which her father-in-law purchased from Husain. Yet, even when Husain visited her house, he didn’t recognize it immediately. Husain, speaking from Dubai, confirmed the incident, saying he had done so much work over his lifetime that for some of his older, more obscure works, he had to look very closely to figure out if they were his.

Husain said he did not feel it was possible for him to catalogue all his work, especially his earlier works, which he never thought would become valuable. “In the beginning, I didn’t know what would happen to me," he said. Only in the past 15-20 years did he realize “that I had not done so badly". If artists are living, then the work can be best judged by them, said Husain, but if dead, then it’s the job of experts to judge authenticity.

In Hore’s case, another expert, Kolkata-based curator Nanak Ganguly, who is considered one of the country’s foremost experts on Hore’s work, said his examination of the Gallery Espace catalogue convinced him that the sculptures in question are fake.

Glass artist Vijay Kowshik, whose family knew Hore for more than four decades, said he had visited the exhibition in New Delhi. He, too, described the works at the exhibition as “100% fake".

Fakes of Hore’s work have been floating around for quite some time. He himself took out a newspaper ad in 2002, warning collectors about them. Since then, the value of his work has soared—a recent piece sold at a Sotheby’s Holdings Inc. auction for about Rs18 lakh, and the 20 sculpture exhibit in New Delhi, if original, would be worth at least Rs2 crore, according to several experts.

In January this year, Pranab Ranjan Roy, an art historian and critic, was approached by a “reputed and serious collector" in New Delhi to verify three sculptures by Hore and Baij. “All of them were fakes," said Roy. The works, he said, were purchased by the collector from a reputed gallery. He refused to give names of the gallery or the collector. “A lot of painters who are dead now are copied. It’s nothing new," said Roy.

Works by artists still alive are also being faked. New Delhi-based abstract artist Ram Kumar said at least six collectors approached him last year to authenticate paintings he did not make. “They came to verify the works, but I refused to do so because I knew I did not paint them," said Kumar.

“This is a real problem," said the 87-year-old painter. “But there is nothing you can do."

Sanjukta Sharma in Mumbai also contributed to this story.