New York: Long before Radiohead caused a stir with a pay-what-you-want offer to download its album In Rainbow, the recording company ArtistShare Inc. had a bolder Internet plan.

The company’s chief executive officer, Brian Camelio, founded ArtistShare in 2000 with the idea that fans would finance production costs for albums sold only on the Internet. Artists also would enjoy much more favourable contract terms. Oddly enough, it’s working.

In 2003, ArtistShare’s jazz composer Maria Schneider, raised the $90,000 it cost to produce her album Concert in the Garden from fans and other contributors. They made payments ranging from $9.95 to $18,000 and in exchange got a download of the album and a variety of benefits. 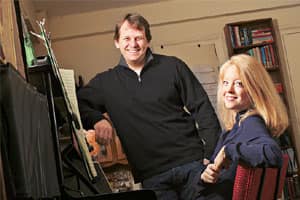 For the top figure of $18,000, the contributor received: an executive producer credit on the album; an invitation to a recording session; a case of signed bottles of Maria Schneider Riesling; special access to some concerts; a bird-watching session with Schneider in New York’s Central Park; and some other goodies.

Schneider got industry recognition. In 2004, Concert in the Garden received four Grammy nominations and won one for Best Large Jazz Ensemble Album. With that, Schneider became the first recording artist to win a Grammy for music released only online.

Her recordings don’t sell in the millions the way Radiohead’s do, but the big-band leader is up for two Grammy Awards on 10 February. Her 2007 recording, Sky Blue, was nominated for Best Large Jazz Ensemble, the track Cerulean Sky for Best Instrumental Composition. And she’s making money.

Schneider said she came to ArtistShare because she wasn’t seeing any royalty income even when she sold 20,000 CDs. Under a standard record-company deal, an artist receives a few cents per CD but usually only after the company has recouped its production and marketing costs.

At ArtistShare, the musician gets 85% of the downloaded product’s sales, with the company taking the balance. The musician also retains rights to the master tape, an unusual deal in the recording industry.

“I own my work and it’s the first time in my career where I’ve made money," Schneider said.

Sky Blue cost $170,000 to produce and has brought in $236,000 in contributions and download payments to date, Camelio said. Schneider can earn as much as $20 per downloaded album, he said.

“I would never go back to the old way," Schneider said.

Camelio, 42, runs his company out of a town house on Manhattan’s Upper West Side. ArtistShare turned a profit two years ago, he said, and last year had revenues of $420,000.

Camelio said he has signed more than 100 artists, including comedian Rick Moranis (with his country-music album The Agoraphobic Cowboy), guitarist Jim Hall and Trey Anastasio, lead guitarist with Phish.

Camelio, a classical guitarist, grew up in Boston playing rock and roll as a child, and then fell in love with classical music. After earning a degree in music from the University of Vermont, he became a composer, studio musician and then a music software programmer.

He started ArtistShare partly in response to the record companies’ practice of retaining the rights to an artist’s master tapes.

“The thing that bothered me was that I knew people who had great records that were shelved and they couldn’t even buy them back from the company," Camelio said. “It really made me angry."