The ultimate winner after the second season of the 20-over cricket tournament has been the IPL itself. The spectacular show in South Africa and the exciting cricket played by all the eight teams has put the brand on a firm pedestal. It meant good business for those who played on the ground too. A Team Campaign and KPMG analysis

With the curtain coming down on the second edition of the Indian Premier League, or IPL, it is evident that the 20-over cricket tournament is no one-time wonder. Instead, it has blazed a path in the world of Indian cricket.

The tournament initially faced serious political and logistical challenges, and there was a time when it seemed that it would be scrapped. The uncertainty made advertisers and sponsors, who were already holding on tight to purse strings because of the economic slowdown, sceptical about putting their money on the game. A legal squabble between the Board of Control for Cricket in India, or BCCI, owner of IPL, and its broadcast partner in India, Multi Screen Media Pvt. Ltd, or MSMPL, added to the confusion. 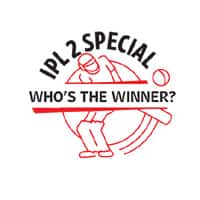 What happened eventually was beyond anyone’s expectations. IPL 2 not only attracted record viewership, it generated immense response from advertisers and sponsors too. Despite the tournament being played outside the country, individual teams had brand sponsorships and associations backing them.

“IPL 2 proved to be much bigger and better than IPL 1. If it was an experiment in the first year, it has established itself as a successful brand in 2009," says M.K. Machiah, general manager, World Sport Group, or WSG, the sports management company that bought the global media rights for IPL with MSMPL.

The data on television viewership trends and reports of packed stadiums underscore the fact that the shift to South Africa was, in retrospect, a providential one. It proved to be a win-win solution for every stakeholder—the tournament was not truncated, Indian fans got to see competitive, world-class cricket, and a new set of international fans got hooked.

It proved, in fact, that the success of a cricket tournament is venue-neutral, even if it’s pitched as a local league. Nor did the shift to South Africa make any difference to revenues, given that these are generated largely through media rights and sponsorships.

Research data by television audience measurement agency TAM Media Research Pvt. Ltd, or TAM, indicates that the average television rating points, or TRPs, were lower for matches in season 2. But the data also show that the overall number of viewers was much more than last year.

TRPs take into account the total number of viewers watching a particular programme for at least 1 minute. “Elections were a big distraction this year. Viewers may have been switching channels to find out what was happening on the political front, and that may have impacted the TRPs," says Shubha George, managing director of Mumbai-based media agency Mediaedge:cia, a part of GroupM India Pvt. Ltd.

The total number of people who watched IPL 2, however, was 109.7 million, compared with 85.6 million last year, according to Audience Measurement and Analytics Pvt. Ltd, or aMap.

Also See The Numbers Game: Then and Now (Graphics)

The same phenomenon was observed this year as well. These learnings, however, could not be used this year because of the limited scope in manoeuvring the timetable. The organizers had to schedule 59 matches in 37 days, against 45 days in the first season. The organizers will most likely optimize fixtures in future seasons to ensure high ratings throughout the tournament.

According to data from TAM, the top three programmes in terms of TRPs between 18 April and 24 May were IPL matches. The TRPs of Top Programmes indicates that when the IPL matches were on, other programmes took a back seat.

While the ad rates went up at least 35% compared with last year, MSMPL has the room to hike them further in 2010, since the reach and attractiveness of IPL has been reaffirmed.

It is also obvious that IPL affects the film industry and broadcasters too. Players in these segments have now factored IPL into their programming strategy and film release dates. Actor Preity Zinta, co-owner of Kings XI Punjab, was quoted in media reports as saying that she had asked her producers not to release any films during the IPL season. As it turns out, film releases were affected in any case by the standoff between film producers and multiplex owners.

Each IPL team has, primarily, five sources of income.

• The central broadcasting revenue: The new deal that BCCI signed with WSG and MSMPL was an unexpected bonus for teams. The details of the deal between the three partners have not been made public, but according to a report by IIFL, the institutional equities arm of brokerage firm India Infoline Ltd. The new contract ensures that MSMPL will pay BCCI Rs670 crore for each of the first four years and around Rs1,100 crore for each of the next five years.

This means that the amount that the WSG-MSMPL combine pays to BCCI will increase in later years, though franchisee share in television revenues will come down to 60% from the fifth year, against 80% in the first four years.

• The central sponsorship revenue: Like last year, the IPL management could not find new takers for the three vacant central sponsorship slots this year. BCCI earned around Rs112 crore from sponsorships and 60% of this goes to the teams. So the revenue from this kitty for each franchisee is likely to be around Rs9 crore. If each slot is valued at Rs20 crore, there is an opportunity loss of Rs4 crore for each team and Rs60 crore for BCCI. However, it is expected that these slots will definitely contribute to revenue in future seasons.

• Local sponsors: Unlike 2008, when most teams managed to get three-six sponsors, this year each team had at least nine sponsors. Chennai Super Kings led the list with 14 sponsorship/brand association deals. Royal Challengers Bangalore was an exception, with only one deal. The franchisee, however, said it was a conscious strategy not to share the platform with any other brand and to use it to promote its own in-house brands.

“We have enough of our own brands to ride on the IPL, so why should we share this space with any outside brand?" Vijay Rekhi, president, United Spirits Ltd, part of the UB Group that owns the team, had told Mint earlier.

Franchisees resorted to two types of sponsorship deals this year: fixed amounts and barter deals. According to media buyers involved in sponsorship deals, the value of such deals went up at least 30-40% this year. While the teams had generated around Rs15-20 crore through individual sponsorship last year, revenues went up from a minimum of Rs50 crore to a maximum of Rs110 crore this time.

The wide reach of IPL, especially among the hard-to-reach youth and male audiences, and the presence of iconic players and Bollywood stars in various teams, is expected to continue to drive sponsorship income for individual teams in future.

• Ticket sales : In season 1, ticket sales accounted for 7-25% of total revenues. This year, most teams had planned an increase in ticket prices and intended to enforce a strict no-free-tickets policy. But with the tournament shifting to South Africa, the efficacy of these strategies could not be tested. BCCI is, however, expected to pass on the ticket receipts generated in South Africa to franchisees. Season 3 will see teams focusing on this aspect to enhance revenue.

Internationally, ticket sales account for approximately 15-20% of total revenues as a result of premium ticket sales and corporate boxes, in addition to the usual ticket sales.

• Licensing and merchandising: This is unlikely to be a major revenue stream in the near term; it has been a non-starter so far. Of what the teams make through merchandising, approximately 80% is kept by the teams; the rest goes to the IPL management.

The tournament’s short duration affects merchandise sales too, for these are highest during a tournament and then taper off. In the near term, the ability to earn significant merchandising revenues is likely to be tested.

Last year, MSMPL and WSG signed the IPL broadcast deal with BCCI for Rs4,048 crore for 10 years, but it was renegotiated just three weeks before the tournament began this year to Rs8,200 crore for nine years.

A senior WSG official said around 80% of this fee will have to be paid by MSMPL. This, however, could not be confirmed with the broadcaster. Some media buyers said it may be tough for the network to generate profits from the deal; the overwhelming interest from advertisers in both the first and second seasons of IPL, however, indicates it may not be so.

This year, MSMPL’s 10-second ad spots for the semi-finals and the final went for Rs10-12 lakh; 150% more than the opening rate of Rs4 lakh per 10 seconds this year, and 20-50% more than the Rs8-10 lakh for the semi-final and final last year. According to estimates by media buying agencies, MSMPL grossed around Rs300 crore last year in ad revenues. The IIFL report says this year that the broadcaster may have raised around Rs600-700 crore. “MSMPL will only be able to make handsome profits if they are able to consistently sell ad rates at a premium, and so far they have managed to do so even under uncertain market conditions," says a media buyer involved in advertising deals with the broadcaster.