In fashion-conscious Bollywood, the dressman needs a makeover

In fashion-conscious Bollywood, the dressman needs a makeover

Mumbai: The leading lady can’t find her dupatta. The hero’s trousers are torn.

The shy 42-year-old, who sits in a small room surrounded by trunks of clothing and racks of costumes in hangers, has mastered the art of the last-minute repair, concocting alternative outfits at a moment’s notice and anticipating every wardrobe whim on a film set. 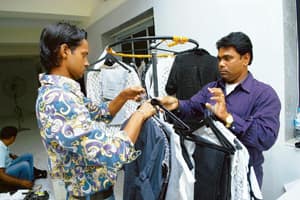 New standards: Anant Sadashiv Tandel (right), a Bollywood dressman, says his working hours have become more erratic, and he is now expected to work 12-13 hours on the trot from his previous shifts of 8 hours. Abhijit Bhatlekar / Mint

Known in the industry as dressmen, Tandel and his ilk represent a tradition dating back to a time before brands and bucks pervaded Bollywood.

Poorly educated and exclusively male, the historical function of dressmen on film sets has been to oversee and organize the costume department. But as the studio system has helped formalize Bollywood, the dressmen are finding that the role most in need of a makeover is their own.

Instead of having dressmen work on an ad-hoc basis, with costumes sourced from a range of theatrical shops, independent tailors, menswear stores and designers, directors now opt to recruit fashion designers such as Manish Malhotra and Neeta Lulla to manage the entire aesthetic of a film.

The shift away from creativity in the hands of dressmen to the fashion designer has also been accelerated by the emergence of a commercial fashion industry.

“Before designers arrived on the scene, the dressmen used to do everything," says Mandira Shukla, the costume designer behind Veer Zaara and Chak De! India, who is currently working with Tandel. “This changed when the fashion designers appeared. Bollywood was changing a lot then and costumes suddenly became very integral to a film. Films back then were mostly about the village. But now they have changed and they are more cosmopolitan."

Shahnaz Vahanvaty, who worked on costumes for The Namesake as well as Mission Kashmir, says that although film-making is getting more professional, there are still two systems in play.

First, she explains, is the old-school system where every star brings his or her own designer to the set, and a sealed packet containing the costumes is handed over for safekeeping to the dressmen, who then take charge of the clothes for the duration of the film while sourcing costumes for the rest of the cast. The second way represents an attempt by a new style of professional film-maker to standardize the “look" of a film by hiring one designer to oversee the entire costume department.

She adds that although dressmen initially resisted the introduction of a more professional and organized system of costuming, they have now become accustomed to the new way of working.

“We cannot do without the dressmen," says Vahanvaty. “They used to do everything, from looking after the clothes, to packing, ironing and delivering. They had an anachronistic way of making notes in these tatty notebooks. The whole look of the film was made for many decades in this manner. Now we have Polaroid films and sheets on a softboard. They have started getting more used to this new system of work, even if they did not approve initially."

She adds: “Dressmen do a wonderful job looking after bits and pieces. They’ll take outfits to the laundry and bring them back at all unearthly hours and often before sunrise. They are a very hard working bunch of people, whose skills have mostly been preserved and passed down to them by their fathers."

However, along with revolutionizing film fashions, the entry of the professional fashion designer succeeded in upturning the pecking order within costume departments. The dressmen, who had traditionally held sway over clothing on set, found they now had to answer to the fashion designer.

“When I first started working on Indian films sets 12 years back," says Urmila Lal Motwani, who has worked on costumes for Dil Chahta Hai and Rang De Basanti, “there was no concept of wardrobe. The whole process was managed by four dressmen, and they took offence at me being on set because they said I was not a union member."

Shukla also recalls the obstacles she faced during her first experience with a dressman on a film set 13 years ago, adding that: “Hanuman Dada (the title accorded to the head dressman on set) would not listen to me and would not do what I asked him to. It was the only way he knew how to be."

However, Tandel, who has worked as a dressman for 19 years, concedes that costume departments have benefited from the professionalism and organization of the new structure.

“There is more discipline now than there used to be," he offers. “And the work is easier now because the designer is present on the set so it takes some of the pressure off." He adds, what hasn’t changed, however, is that dressmen are still in the front line of fire when things go wrong.

“The actors will throw a tantrum if they don’t like their costumes, and then we get blasted," says Tandel. “There are times when I take work on to my shoulders which I am not supposed to do, to make things get done smoother. And when a new fashion designer comes in, they can sometimes find it hard to keep pace, so we have to step in and help to keep things going."

Tandel says that his working hours have also become more erratic. From his previous shifts of 8 hours, he is now expected to work 12 or 13 hours on the trot—“whenever they need me to be there"—while often being excluded from conversations between the director and designer, resulting in “tension" when fittings go wrong.

As well as ironing, mending and collecting laundry, a dressman’s responsibilities involve recalling which outfits were used in previous films, where items are stored and how to retrieve them.

Their role also involves being on set to get actors ready for shoots, and making clothes to a budget; all tasks that have historically been complicated by the lack of planning and structure in making Bollywood films.

Despite the downgrading of their roles and responsibilities and the shift in the power centre, costume designers are unanimous that dressmen, who are heavily unionized, remain an indispensable fixture on film sets.

“They provide a huge amount of help," says Shukla. “They understand a shoot’s timings, as well as the urgency and requirements for a film. They are integral to a film set. Why would I want to iron my own clothes or be on the set round the clock to run everything?"