Home / Industry / Advertising /  Only 17% Indians own smartphones: survey
Back
Share Via

Only 17% Indians own smartphones: survey

Internet usage and smartphone ownership in India has risen in past two years, but still lags behind most other emerging nations, as per a Pew survey

New Delhi: Internet usage and smartphone ownership in India has increased in the past two years, but Asia’s third-largest economy still lags behind most other emerging economies, according to a survey by Pew Research Center.

As many as 54% of people across emerging and developing countries reported using the Internet at least occasionally or owning a smartphone in 2015 compared with 45% in 2013, according to the study released on Monday. Much of that increase came from emerging economies such as Malaysia, Brazil and China.

India stands among the lower half of surveyed countries in Internet usage, reporting an increase of 6 percentage points between 2013 and 2015. 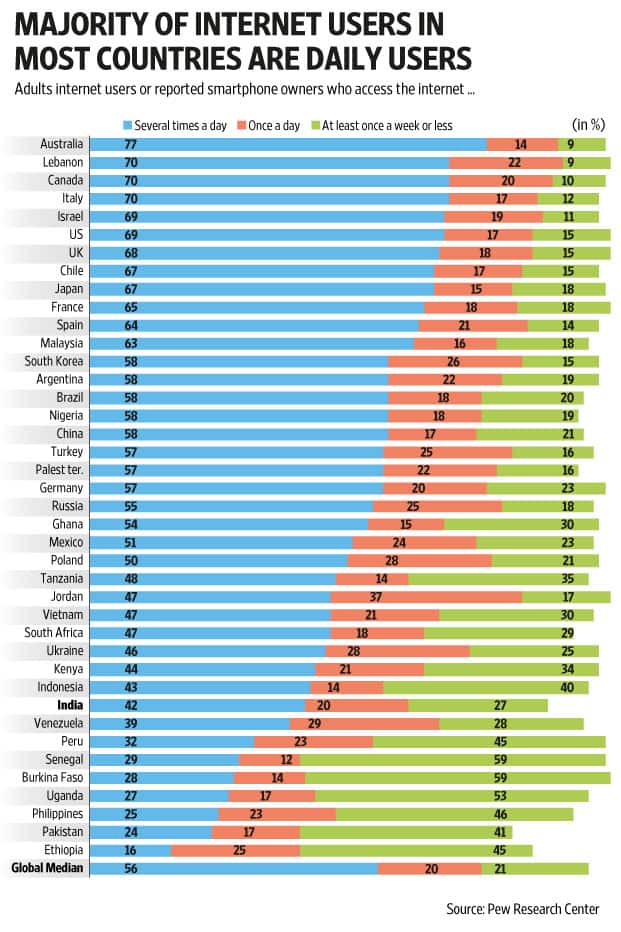 India, the survey said, had low levels of smartphone ownership (17%) among its respondents. This dwarfs in comparison to South Korea, where 88% of those surveyed said they owned a smartphone. The study found that only 13% of adult Indian respondents who owned a smartphone were women, while 21% were men.

India overtook the US as the second largest smartphone market in the world, with its user base increasing by 220 million by the end of last year, according to a report by market research firm Counterpoint. Interestingly, the survey said that social networking was most prevalent among online adults in Jordan (90% of Internet users), Indonesia (89%), the Philippines (88%), Venezuela (88%) and Turkey (88%). In comparison, 62% of Indian Internet users (or smartphone owners) said they used social networking sites. Among those, 69% respondents were millennial users, while 48% were aged 35 and above.