Google's Translate app is popular because it makes understanding other languages easier, and is a better bet than Microsoft's Translator and UC Web's Language Translate

Google’s Translate app has been the default app for many smartphone users as it comes preloaded on a lot of Android devices and is also available for iOS devices through the web browser. It comes in most handy when one is travelling to a place where people speak or use a completely different language.

While Translate was the first app to offer the option to translate on a mobile phone, it is not the only one. A number of apps such as Translator by Microsoft and Language Translate by US Web offer similar features; yet, the Translate has an edge over them for a number of reasons. 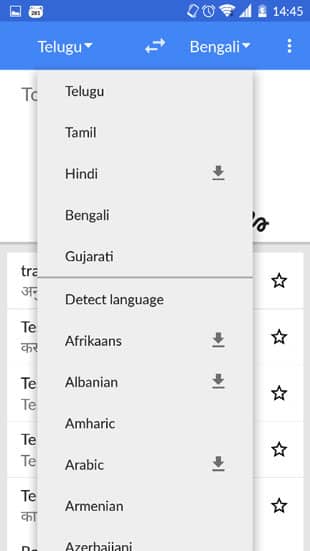 If you can pronounce a word but don’t know what it means, you can simply say it aloud by tapping on the mike icon. This will translate the word and show how it is written on the screen and will also speak it aloud. Microsoft Translator can translate spoken words too but only shows it on the screen and doesn’t say it aloud. This feature allows users to learn the correct pronunciation. The ability to translate text on a webpage is one of the features of Translate that comes built-in with the Chrome browser. This feature allows users to translate any page in its entirety by simply enabling the Google Translate option in the Chrome browser. You can access it by going to Settings->Site Settings->Language->Translate. The only other similar service for webpages is the UC Web’s Translator app but that works with only UC Web browser on phones. Another major advantage of using Translate is the closer integration it offers not just with Chrome but also with the default messaging app. This feature allows you to select any text message directly from within the Translate app, tap on it and translate it in the language you want.

More than just the meaning

One of the bonuses of using Translate is that it not only shows the direct meaning but pulls out some other details as well. For example, it shows what the word means as a noun, adjective or a verb in the translated language. This is a pretty useful feature and might help use a word more appropriately. This feature is not there in Translator or other apps.