Top of the Mind AD Survey | The leading men of commercials

Top of the Mind AD Survey | The leading men of commercials

Television commercials featuring either Amitabh Bachchan or Abhishek Bachchan, Bollywood’s father-son duo, took eight out of the top 10 spots in the Mint-Ipsos-TVAdIndx survey for May. 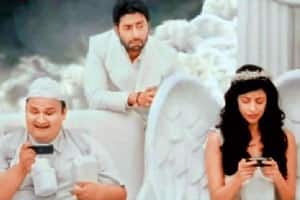 Ads for the sixth season of the TV game show Kaun Banega Crorepati, a programme hosted by the senior Bachchan and based on the UK’s Who Wants to be a Millionaire?, captured four spots among the top 10. Kaun Banega Crorepati promotional ads took the fifth, seventh, eighth and 10th spots in the survey. Ads for Fair & Lovely MultiVitamin Cream, at sixth, and Tata Docomo 3G Life, at ninth, took the remaining two positions in the ad reach index. The top-ranked Idea 3G Smartfone ad scored 89 points on the May ad reach index while the No. 2 ad scored 88. That compares with the 85 points that Idea Cellular’s top-ranked advertisement scored in the preceding month.

The survey polled 754 respondents in the age group of 18-40 from high-income groups in New Delhi, Mumbai and Bangalore.

When a man and an angel come across a “House Full" sign at a movie theatre in heaven, the man enquires if tickets can be bought in black. There’s no black in paradise, comes the response. Actor Abhishek Bachchan materializes behind the man: “Film na dekh paana, old idea (Not being able to watch a film, old idea)." The solution: Idea 3G Smartfone offers YouTube movies and heavenly apps. Happy, the man and the angel get to watch Zindagi Na Milegi Dobara (which roughly translates to You Have Just One Life) on their mobile phones. Tag line: An idea can change your afterlife.