In our preview to the Indian Premier League (IPL) auction on Wednesday, we had said former India wicketkeeper-batsman Dinesh Karthik was most likely to be the highest valued player in the Twenty20 (T20) cricket tournament. We had also said that three players would be sold for ₹ 12.5 crore or higher. We came close on both the predictions, but were not quite there.

Karthik was bought by Delhi Daredevils, the team he represented in 2008-10, for precisely ₹ 12.5 crore. And he was one of two players to be valued at that sum, or higher.

Leading the pay scales on the first evening of the auction was Yuvraj Singh, who was snapped up by Royal Challengers Bangalore for ₹ 14 crore. And that wasn’t without its share of drama; he had been sold to the Bangalore team for ₹ 10 crore and auctioneer Richard Madley had even brought down his hammer when he realized that he had missed a bid from Kolkata Knight Riders. Madley continued the auction for Singh, and finally the Knight Riders did not challenge the bid of ₹ 14 crore.

Writing in ESPN Cricinfo about the strategies that teams use while approaching an IPL auction, former Delhi Daredevils official Amrit Mathur says that back in 2008, in the first auction, the teams’ methods and systems were extremely primitive. “Many thought, ‘Let’s prepare a wish list and we’ll learn and decide as we go along’," he wrote.

Mathur also said that over the past six years, teams have become more sophisticated, and that now they use fairly complex processes to evaluate players, and not just go by averages and strike rates. While Moneyball is not yet there, he says, teams have learnt to indulge in sophisticated data analysis in order to build their squads.

On evidence from the first day of the auction on Wednesday, however, not much seems to have changed. When asked about why he spent close to one-fourth of his team’s salary cap on Yuvraj Singh when the team had already retained three star batsmen (Chris Gayle, Virat Kohli and A.B. de Villiers), Royal Challengers owner Vijay Mallya said: “We were very keen on him. Virat Kohli, our captain, was very keen on him." Evidently, his team had come to the auction with a wish list, and that got it into trouble.

Having recruited Singh, it had used up close to 75% of its overall budget and had only four batsmen to show for it. Given that the entire squad has to be built during the auction this season (unlike previous auctions when teams could supplement their squads with uncapped Indian players after the auctions), they were left with only ₹ 16.5 crore to buy the rest of the squad, including a good bowling attack. They ended Day 1 with only ₹ 1.8 crore in the bank, and having bought only 12 players (squads can contain anywhere between 16 and 27 players). Of this, over ₹ 150 crore was spent on batsmen, about ₹ 100 crore on all-rounders, ₹ 50 crore on wicketkeepers and only about ₹ 120 crore on bowlers. These figures are approximate since retained players have been allocated to different slabs in an arbitrary manner.

The table shows that only Mumbai Indians and Kolkata Knight Riders spent anywhere close to half their budgets on bowlers, with Rajasthan Royals (which got good value for money on some bowlers and recruited a number of all-rounders) spending only about 6% of their total spending on bowlers (These figures include money docked from the teams’ quotas for retained players).

English auctions and right to match

In theoretical terms, the auction process used for the IPL process is an ascending-bid open outcry, or English auction. The auctioneer increases the price of a player in predetermined steps, and teams have to indicate by raising a flag whether they are interested in bidding at that price. When only one team has its flag raised, that team is determined as having won the auction and wins the player. The price paid for the player is the price level at which this team’s was the only raised flag.

Theoretically, it can be shown that the English auction is equivalent to a closed-bid second-price auction (also known as a Vickrey auction). The advantage of these auction systems is that they enable bidders to disclose their true willingness to pay, and are thus the most preferred auction mechanism. For example, the ongoing auction for telecom spectrum uses a variation of the English auction.

In some auctions (especially for infrastructure maintenance), the incumbent is given the option of matching the bid of the auction winner after the auction is over. This feature, however, works well only when it is paired with a closed-bid first-price auction. When an incumbent has the option of matching the winning bid, he effectively has an opportunity of participating in a closed-bid auction after seeing the bids of all other participants. Thus, he decides to match the winner’s price if and only if it is less than or equal to his own willingness to pay. And for this to work effectively, the winning bid should indicate the winner’s willingness to pay.

Now, if C (the prior owner of the product) is allowed to match the winning price (let’s say ₹ 61), it is unfair to A since A was willing to pay up to ₹ 100. In this situation, it is possible that if C’s willingness to pay was ₹ 80 (lower than A’s, but higher than the winning bid), he would win the auction, even though his willingness to pay was lower than A’s—a clear source of inefficiency.

This is exactly the flaw in the IPL auction system. Players are sold via an English auction, but in a limited number of cases their original employers can match the price of the winning bid and retain the player, even though the winning bid may not have indicated the original winner’s willingness to pay.

For example, the bid for South African batsman Faf du Plessis was initially won by the Delhi Daredevils for ₹ 4.75 crore (which might not have represented their full willingness to pay), but du Plessis’s earlier employer Chennai Super Kings matched the bid at that price and bagged him.

It also appears that teams didn’t fully appreciate the concept of the right to match. For example, when South African all-rounder Jacques Kallis came up for auction, his former employer Kolkata Knight Riders entered the bidding, thus possibly bidding up his price, before it used a right to match card to secure his services for the next season.

With Sri Lanka playing a Test series in England at the same time as the IPL, the only Sri Lankans who were picked in the auction were Lasith Malinga and Thisara Perera, neither of whom is usually in the Sri Lankan Test cricket squad. With there being no takers for even high-profile players such as Mahela Jayawardene and Tillakaratne Dilshan, Kumar Sangakkara’s decision to give this auction a miss looks even wiser.

In the first part of our preview, we had mentioned that an Indian player should be valued higher than a comparable foreigner due to the rules around team composition. In Wednesday’s auction, teams seemed to take it too far, as there seemed to be a reluctance among all teams to bid up foreigners, compared to Indians. There were a few cases of foreigners of much superior skills and reputations going for less than inferior Indian players.

Quick start followed by a lull 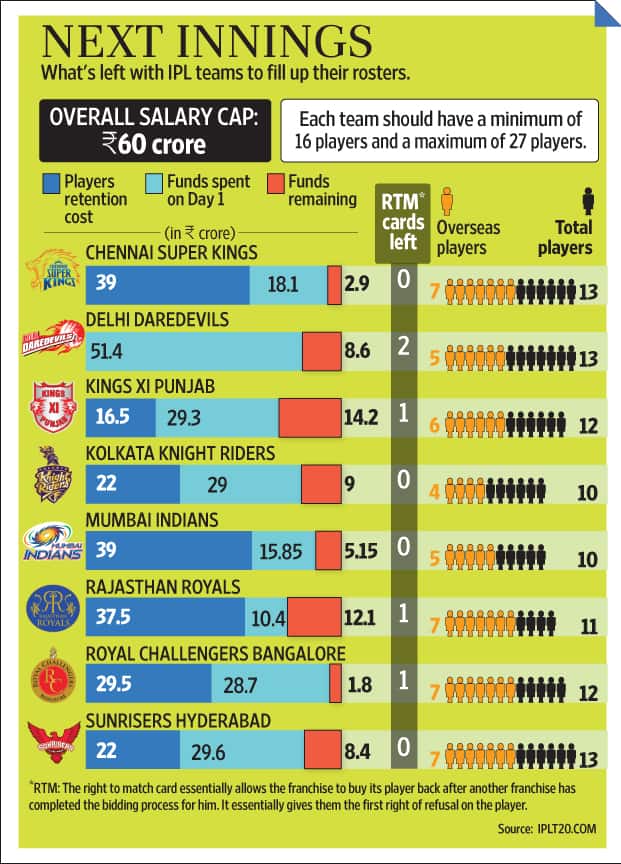 Thursday’s auction is unlikely to be explosive, given the small purses at the teams’ disposal. However, it is going to be important as teams look to augment and complete their squads with uncapped Indian players. In the past IPL seasons, the selection of uncapped Indian players has been proved to make a big difference across teams, and the IPL rules (where at least seven players out of 11 need to be Indians) means that it is the uncapped Indians who will determine the nature of their respective teams.

We are in for an interesting second day of auction.