New Delhi:Young India all-rounder Ravindra Jadeja was sold for $2 million at the Indian Premier League auction in Bangalore on Saturday, but a host of big-name stars missed out. 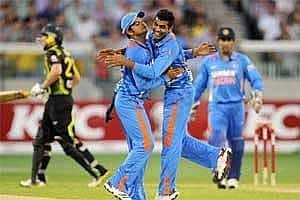 Just 17 of the 144 foreign and Indian players who had thrown their hat in the ring found favour with the franchises in the morning session of the auction, which was restricted to players not already aligned to any team.

A bigger surprise, however, was the list of players who missed out.

There were no takers for England’s James Anderson, Graeme Swann, Ian Bell, Matt Prior and Ravi Bopara.

Jadeja, Jayawardene, Kumar and McCullum belonged to the now-defunct Kochi Tuskers franchise, which played in last year’s tournament before being thrown out of the IPL in September for non-payment of dues.

The franchises spent money to strengthen their line-ups ahead of the fifth edition of the IPL which will be played between April 4 and 27 May.

Much depended on the availability of the players for the seven-week 76-match tournament.

England’s international players will not be available for more than a month, since their tour of Sri Lanka ends on 7 April and is followed by a home series against the West Indies starting in mid-May.

The leading Australians can join the IPL only after their tour of the West Indies finishes on 27 April.

The auction is being held in the shadow of the withdrawal of the Sahara group, sponsors of Team India and owners of the Pune Warriors franchise, from their association with Indian cricket earlier on Saturday.

Sahara, which cited a “one-sided emotional relationship" with the Board of Control for Cricket in India (BCCI) for their decision, did not take part in the auction.

It remained to be seen if Pune’s withdrawal will leave eight teams in the fray for this year’s tournament.

“It’s unfortunate," said IPL chairman Rajiv Shukla of Sahara’s decision, but insisted the tournament will go ahead as scheduled.

“They haven’t sent us anything in writing. So I can’t comment right now. But the IPL will continue. The show always goes on."