In India, Infinity War had the highest opening weekend for any Hollywood film, earning Rs94.3 crore by the end of Sunday

New Delhi: The superheroes of Avengers: Infinity War stormed movie screens across the world over the weekend, setting new box office records both in India and worldwide.

At last count, the Marvel blockbuster had swept up $641 million across the world over its first weekend, smashing the record held by The Fate of the Furious (2017), which had gathered $542 million in its first weekend.

An estimated $258.2 million of Infinity War’s collections were from US and Canadian theatres, beating independent forecasts of about $230 million. The film also earned $382.7 million overseas. Infinity War cost $300 million to make, according to Bloomberg Intelligence. The film’s success was driven by a decade-long buildup of movies and comic stories from the Marvel franchise.

In this edition, the superheroes mount an all-out effort to defeat Thanos, played by Josh Brolin, who is seeking to collect six Infinity Stones. The fate of Earth, and existence itself, hang in the balance. 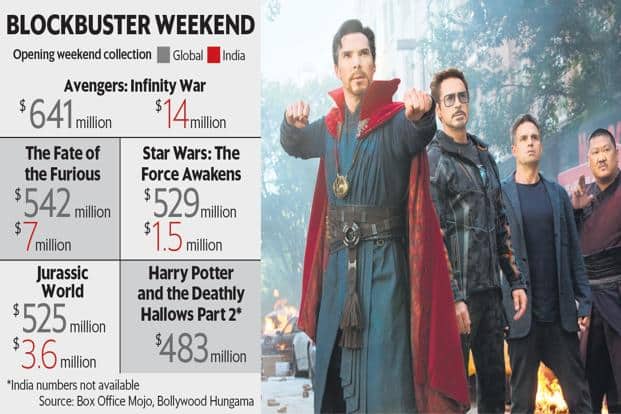 The global record is notable because the movie has not opened in China yet, the second biggest box office, where it debuts on 11 May. According to Dave Hollis, president of worldwide theatrical distribution for Disney, the Avengers franchise has a strong track record in China, giving the studio “tremendous self-confidence" in the movie’s performance there.

“The response to the film has been nothing short of phenomenal and the collections speak for themselves," said Atul Mohan, editor of Indian trade magazine Complete Cinema. He also noted that the film has already crossed the lifetime collections of Rs72.96 crore of Avengers: Age of Ultron, the previous instalment.

Infinity War’s achievement in India is all the more impressive because it has beaten the opening weekend performance of every Bollywood film in 2018. Padmaavat earned Rs75 crore in its opening weekend while Baaghi 2 earned Rs72.5 crore.