The learning outcome, especially among school students, is often reflective of the future competitiveness of a state

New Delhi: While political parties and experts will weigh the outcome of the upcoming assembly elections in five states as a referendum on the Central government’s note-ban exercise, there is hardly any talk on the state of education in these states. The learning outcome, especially among school students, is often reflective of the future competitiveness of a state.

In the absence of enough comparable data on Goa, Mint looked at the learning outcome of four poll-bound states: the most populous and politically crucial Uttar Pradesh, Uttarakhand, Punjab and Manipur.

The charts also show whether the learning outcome has improved over the last five years under the incumbent governments in each of these states. Regional disparity: The quality of education in a majority of Indian schools is disappointing. Several reports over the years have suggested that the national picture is not rosy, but what’s more worrisome is the regional disparity and the growing chasm in the learning outcome. 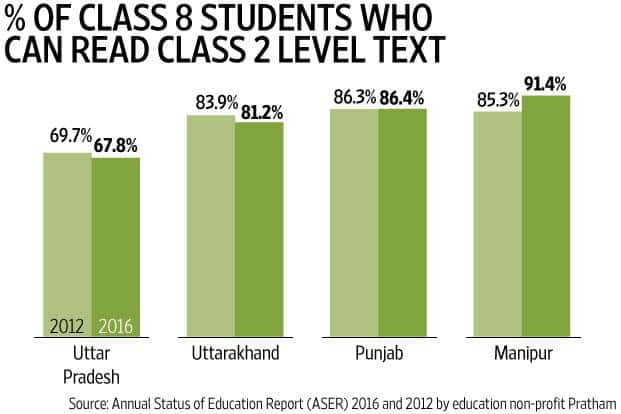 Though Uttar Pradesh students of the same grade registered almost a percentage point growth in 2016 over 2012, the 2016 performance is, in fact, seven percentage points less than in 2014.