The IIM Bill allows the elite B-schools to award degrees instead of diplomas, grants freedom in terms of administration, recruitment and daily functioning

New Delhi: The Indian Institutes of Management (IIMs) have finally got what they have been demanding for years—greater autonomy.

The Union cabinet on Tuesday cleared the Indian Institute of Management (IIM) bill, 2017 that aims to grant “complete autonomy" to the elite B-schools and allow them to award degrees instead of diplomas, as is the case now.

The bill will allow IIMs “complete autonomy... combined with adequate accountability", the cabinet said in a statement after meeting in New Delhi.

The IIM bill, under discussion for several years, will grant the premier management schools freedom in terms of administration, recruitment and daily functioning. 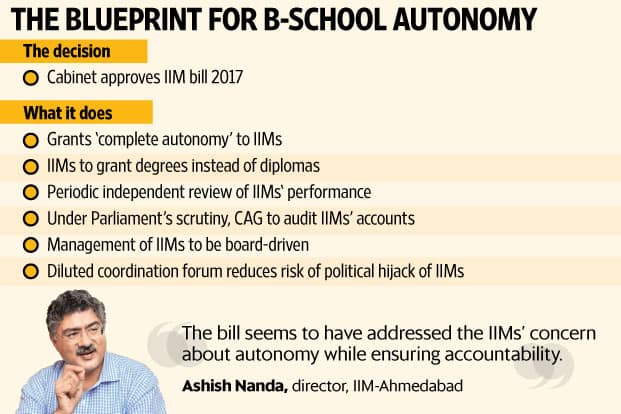 “The IIM Bill, which was approved by the Cabinet, has been prepared with the aim of furthering excellence in these premier institutions," Prime Minister Narendra Modi said in a post on the microblogging site Twitter.

“We trust excellence and quality," Javadekar, who could not attend the cabinet meeting because of family engagements, said in a post on Twitter.

The bill will ensure IIMs are “board-driven, with the chairperson and director selected by the board".

This means neither the human resource development (HRD) ministry nor the president of India will have a say in the selection of top executives at these B-schools.

The bill seems to have addressed the IIMs’ concern about autonomy while ensuring accountability- Ashish Nanda, director of IIM Ahmedabad

Currently, the boards largely make recommendations and the government either accepts or rejects their proposals. This includes subjects like the appointment of directors and the chairman of the board of governors.

The bill became controversial because of concerns that it may erode the autonomy of these premier institutions. The IIMs protested against the bill in June 2015 when the first draft was put up for public feedback. “If the bill is passed in the current format, then there will be a revolt in the IIM system," J.J. Irani, chairman of the IIM Lucknow board, said at the time.

Following intervention by the Prime Minister’s Office, the HRD ministry made changes to the draft, accommodating most of the demands of the elite schools. Most disputed issues, such as the composition of IIM boards, selection of board chairmen and course fees, will now be decided by the IIMs with little interference from the ministry, Mint reported in August.

“On the face, the bill seems to have addressed the IIMs’ concern about autonomy while ensuring accountability," said IIM Ahmedabad director Ashish Nanda. He said that he had not seen the final copy of the bill yet.

The bill contains a provision for a “Coordination Forum of IIMs". The forum was a contentious issue as the IIMs were concerned that this would allow the HRD ministry to control the B-schools, considered a nursery for future corporate leaders.

The coordination forum, in its final shape, will have limited power and the HRD minister will not be its convener. It will be an advisory body, consisting of 33 members, and its chairman will be selected by a search-cum-selection committee.

Likewise, the governing board of an IIM will have 15 members including three women members and five from the alumni community.

The bill will grant statutory status to IIMs, which will be termed institutions of national importance. “This will allow us to grant degrees instead of diplomas," said Rishikesha Krishnan, IIM Indore director.

The move will give global recognition to courses offered by the IIMs, especially the newer institutions. All IIMs are separate autonomous bodies registered under the Societies Act.

Being societies, the IIMs were not authorized to award degrees until now so they have been awarding post-graduate diplomas in management instead. While these diplomas are treated as equivalent to MBAs, the equivalence is not universally recognized.

The bill provides for a periodic review of IIMs’ performance by independent agencies. The annual report on the IIMs will be placed in Parliament and the comptroller and auditor general will be auditing their accounts. The bill is expected to be tabled in the upcoming budget session of Parliament.