The report for 2016, released on Wednesday, said the overall learning level among Indian students is “pretty disappointing".

That should worry policymakers in a country that boasts of near-universal enrolment in elementary schools (Class I-VIII), thanks to a successful law that makes education a fundamental right for all children in the 6-14-years age group. 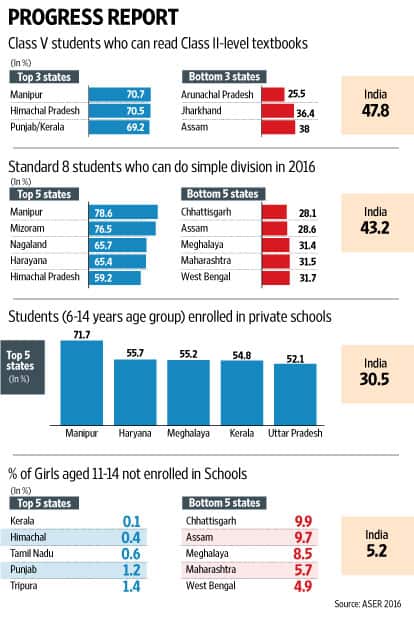 This means every other student is unable to read something meant for someone three classes below.

The children fared no better in math (or arithmetic, the second of the famous three ‘R’s of education) or English comprehension. For example, the ability of Class VIII students to divide numbers has dropped further. The proportion of all Class VIII students in rural India who can divide a three-digit number by a single-digit one has dipped to 43.2% in 2016 from 44.2% in 2014. And while 32% of children in Class III could read simple English words, up by 3.5 percentage points over 2009, in Class V, only one out of every four students could read a English sentence.

ASER 2016 underlines that this situation has remained unchanged since 2009, when the Right to Education, or RTE, Act was passed by Parliament.

“The numbers are pretty depressing," said Arvind Subramanian, chief economic advisor to the Union finance ministry, while unveiling the report. He said the problem has to be dealt with from the bottom-up. This needs political will, added Subramanian. Development doesn’t just mean “expressways" but also “educating millions of students".

“We have to move out of the curriculum cycle and address the learning issue in schools," said Delhi education minister Manish Sisodia who was a speaker at the event.

India’s performance should also be seen in the light of the Right to Education law and many promises made by both by the Centre and state governments.

“India is close to schooling for all but our journey towards learning for all is yet to begin," said Madav Chavan co-founder of Pratham, the non governmental organization that publishes ASER. “Many parents and policymakers still believe that schooling leads to learning. More than 10 years of data shows that issue of learning needs urgent attention," Chavan added.

ASER 2016 is yet another reminder that even as governments change, very little changes for India’s school-going children, said Yamini Aiyar, director, Accountability Initiative, a body that tracks education sector.

And states such as Gujarat, Rajasthan, Maharashtra, Himachal Pradesh, Odisha, Tripura, Chhattisgarh and Andhra Pradesh have shown some promise in individual indicators.

The green shoots are largely happening in government schools and they signify three things, said Rukmini Banerji, director of ASER Centre that oversees the data collection for the report. “First, our schools can improve (in terms of) quality; second, the buzz around quality has percolated down slightly to where it matters; and third, since the learning gap is less in Class I-III we are catching up marginally while faltering in senior grades where the gap is huge."

Meanwhile, the enrolment level in schools remains near universal with 97% enrolment in schools. Over the past two years, the reach of private schools has remained largely unchanged. In 2016, 30.5% of all elementary school children were in private schools as against 30.8% in 2014. There are at least seven states, including bigger ones such as Uttar Pradesh, Haryana and Punjab, where more than 50% of elementary schoolchildren are in private schools, indicating the dwindling faith in the government schools.