Of the 100 best institutions in the NIRF rankings, 67 are from just eight states, including Delhi

New Delhi: When the human resource development ministry announced the result of the second edition of the National Institutional Ranking Framework (NIRF), the first thing that was discussed and written about was—the number one institution and those among the top 10 list in overall and individual segments. This is the official ranking of India’s vast higher education system by the Central government.

In the 2017 rankings, only 2,995 institutions participated. India has 39,000 colleges, 11,000 stand-alone institutions and over 760 universities—cumulatively around 51,000-strong higher educational institutions. Of all these, less than 3,000 participated—that’s just about 6% of the overall pool.

Whether it’s due to lack of awareness, non-eligibility for not completing a specified number of years, lack of documentation or simply the fear of falling behind, the overall scenario shows that higher education needs a huge leg-up—both from the government and individual private promoters.

But the bigger problem is inequality. The inequality is not just evident among overall top institutions. Even classifications among institutions show a similar picture. For example, among best 100 universities, 40 are in three states and 60 are in six states. Like overall rankings, here too, the names of the states are familiar—with Tamil Nadu having 24 of the best 100 universities in the country, and Maharashtra, Karnataka and Delhi filling in for the rest.

This unequal distribution of quality institutions does contribute to some extent to inward migration to these states in general and cut-off marks for selection in these institutions touching 100% or near the perfect score, especially in particular subjects.

For example, in 2015, Delhi University became a talking point when College of Vocational Studies and Indraprastha College for Women had 100% cut-off marks for their computer science programme for general category students. Similarly, Shri Ram College of Commerce, one of the best in India, announced its cut-off at 98.25% for Economics (Honours) and 97.37% for B.Com (Honours) in the same year. In 2016, Ramjas College of Delhi University put out its first cut-off requiring the highest score of 99.25% for admission into B.Com (Honours). Come June, the situation most probably will be similar this year too. 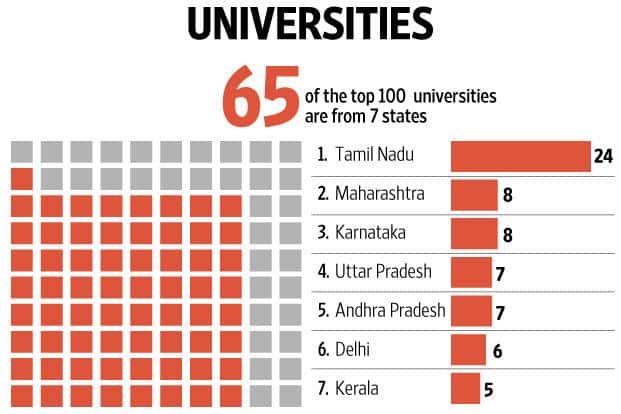 Like universities, the inequality is evident at the college-level too. Among the best 100 colleges in India, Tamil Nadu again has 37, Delhi has 11 and Kerala 14. To put this in perspective, 77 colleges of the top 100 are from just five states and Union territories. Expand
Subscribe to Mint Newsletters
* Enter a valid email
* Thank you for subscribing to our newsletter.
Topics
mint-india-wire
First article
Close
Recommended For You
Feedback
Select your Category
Your Message
No Network
Server Issue
Internet Not Available