The following data captures some trends with respect to enrolment, drop-out, and transition rates across various levels of education

The Union budget speech recognized the need to measure learning outcomes in schools. An amendment has been introduced to the Right to Education (RTE) Act to permit detentions after class V and class VIII after a test, remedial education and a retest. In light of this, the following data captures some trends with respect to enrolment, drop-out, and transition rates across various levels of education. While universal enrolment has been achieved at the elementary level (class I-VIII), the enrolment consistently falls with successive levels of education. Gross enrolment ratio (GER) is the student enrolment as a proportion of the corresponding eligible age group in a given year. GER in class I-V reduced from 114% in 2008-09 to 100% in 2014-15. The above-100% enrolment rate in 2008-09 indicates that students enrolled in class I-V included those younger than six or older than 10 years. In 2014-15, enrolment in class I-V was about 100%, which signals a more age-appropriate class composition. 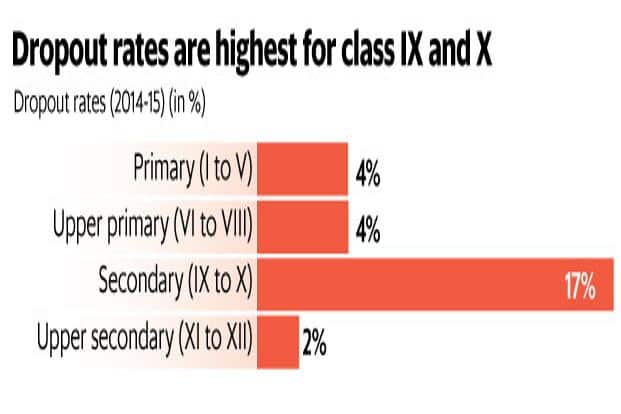