According to RBI, while spending on tuition and hostel fees by Indian students studying abroad has shot up 44% in the past three financial years, expenses of foreign students in India declined 14% in the last two fiscals

When overseas education expenses by Indian students had fallen by 20% to $1.98 billion from $2.47 billion in the previous year in 2015-16, experts and government authorities had claimed that a growing number of quality institutions such as the Indian Institutes of Technology (IITs), Indian Institutes of Management (IIMs) and central universities, were instrumental in curbing the exodus of Indian students. Besides, tough immigration rules in countries such as the UK were also cited as a major reason for the reversal in trend. 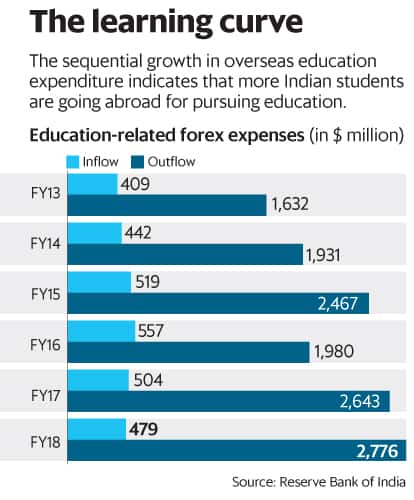 Now, the sequential growth in overseas education expenditure indicates that more Indian students are going abroad for pursuing education. In fact, the students flow to key destinations such as the US, the UK, and Australia has seen a steady rise. For instance, the count of Indian students studying in the US went up from 132,888 in 2014-15 to 186,267 in 2016-17.

Similarly, Australia has also been a favourite destination. Rod Hilton, deputy high commissioner of Australia in India, said last week that his country is home to 68,000 Indian students (up from 60,000 in 2016), and education is a “flagship sector" in Australia-India relations.

Suneet Singh Kochar, chief executive, Fateh Education, a company that helps students get admission in the UK and Ireland, said there were primarily three reasons for the uptick in overseas education expenditure. “Numbers are certainly growing because aspirations have gone up faster than prosperity and lack of enough quality education back home. Second, the cost of education in key destinations has gone up, too, may be more than the inflation rate. And three, the scholarships, which were earlier on offer, have come down."

“For the last two-three years, several universities from Australia, the UK, the US, and Canada are very active in recruiting students from India. This is one of the key reasons why you see bigger outflow of students and relatively bigger expenditure by Indian students overseas," said Kalpesh Banker, managing partner, Edushine Advisories.

An HRD ministry official speaking on the condition of anonymity said though the government is making efforts to bring in more foreign students, and improve the quality of education in domestic institutions, it will take some time before one can see the results.

Of late, India has been making efforts to bring in foreign students and faculty to domestic institutions. The Study in India scheme seeks to attract 200,000 students in the next four years, more than four times the present number of foreign students in India. Besides, six universities, which were granted ‘Institute of Eminence’ status by the central government, are allowed to hire 25% foreign students.