In 14-18 years age group, only 43% able to do a simple division correctly, while 47% of 14-year-olds could not read a simple sentence in English, says the ASER study

The legacy of learning deficit visible so far in elementary school children is now being reflected among young adults too, the Annual Status of Education Report (ASER) study revealed.

Since, around 10% of Indian population is in this age group, their productivity has a direct bearing on India’s competitiveness as an economy. At the same time, it also poses a political challenge to incumbent governments as they cannot be easily absorbed in the workforce—adding to the growing number of unemployed youth. 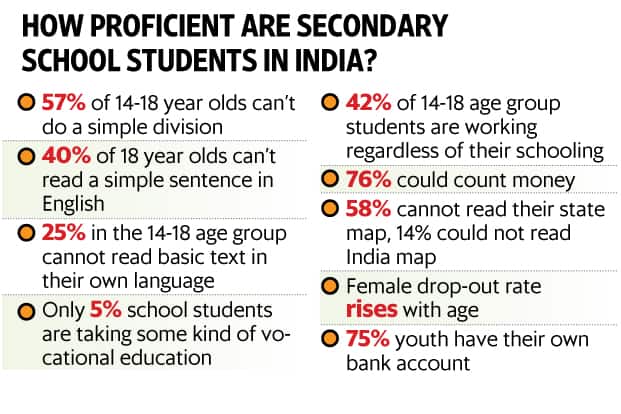 In the 14-18 years age group, over one in two students could not do a simple division. “Only 43% are able to do such problems correctly," the ASER 2017 conducted by education non-profit Pratham revealed.

Similarly, nearly one out of two (47%) 14-year olds could not read a simple sentence of English; the proportion was two out of five for 18-year olds. It is not just English, 25% of the youth could not read basic text fluently even when it was in their own languages.

“Learning deficits seen in elementary school in previous years seem to carry forward as young people go from being adolescents to young adults," the report underlined. “Interestingly, although reading ability in regional languages and in English seems to improve slightly with age (more 18-year olds can read than 14-year olds), the same does not seem to apply to mathematics. The proportion of youth who have not acquired basic math skills by age 14 is the same as that of (an) 18-year (old)," it added.

The findings are disappointing and pointing to a larger problem, said Arvind Subramanian, chief economic adviser to the Union finance ministry, while unveiling the report. According to him political parties needed to make education an electoral issue to improve learning outcomes.

This year ASER surveyed students in the age group of 14-18 years, unlike the last 12 years when it focused on students in elementary schools. The survey, though, has a smaller sample size this year.

“When your secondary level students are not learning like the elementary students, the problem becomes bigger. It is because of two reasons—one, this 14-18 years age group are ready to enter the workforce and thus has a direct bearing on the economy; second, the families depend more on this young cohort for doing free work," said Rukmini Banerji, chief executive of Pratham Education Foundation.

This time ASER teams went beyond basics and surveyed students on activity in schools, ability to solve problems, exposure, awareness and aspirations across 28 districts in 24 states to gauge the “ability (of adolescents aged 14-18 years) to lead productive lives as adults".

And the findings are equally disappointing. For example, 24% in the 14-18 age group could not count currency correctly, 44% could not add weights correctly in kilograms as they were asked to add weights, 14% could not recognize a map of India and some 36% couldn’t name the capital of India. Similarly, while 79% could name the state they lived in, 58% could not locate it on a map.

The ASER report also shows that enrolment gap between males and females in the formal education system increases with age. There is hardly any difference between boys and girls enrolment at age 14. But by the time they turn 18, the drop out rate is 32% for females and 28% for males.

“The problem is multi-faceted. It’s not confined to just reading or mathematics and hence needs urgent attention," said Banerji.

The ASER findings serve as a warning ahead of India’s participation in the rigorous Program for International Student Assessment (PISA) to be conducted by OECD in 2021. In 2009, the last time it participated, India was ranked second last among 74 countries and regions, inviting sharp criticism from academics and experts on how Indian education is impacting the country’s competitiveness to become a global powerhouse.