New Delhi: The Indian Institute of Science (IISc) in Bengaluru has jumped some 50 places in the Times Higher Education World University Rankings for 2016-17, making it the top Indian educational institution in the list.

The rankings published on Wednesday night put IISc at striking distance of the coveted top 200 list. It’s the best ranking ever achieved by the institute.

After rating the first 200 universities, Times Higher Education does not assign a particular ranking but sorts them into groups of 50.

“It is fantastic news that India takes 31 places in this year’s newly-expanded list of the world’s top universities. Its leading university—the Indian Institute of Science—is also edging closer to the top 200, claiming a spot in the 201-250 band, its highest ever position," Phil Baty, editor of the Times Higher Education World University Rankings, said in an email. 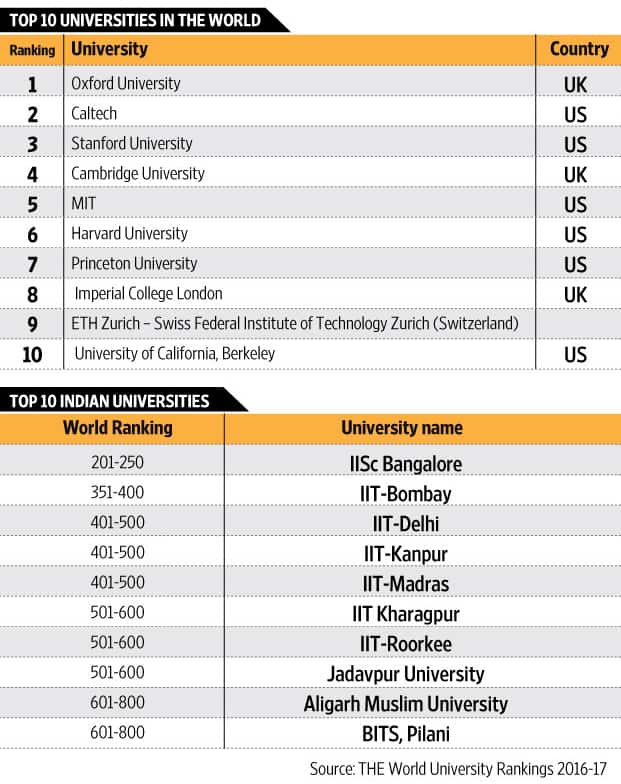 Overall, India has 31 institutions, including 14 new names, among the top 900 universities in the world.

In the latest rankings, there is also a new number one for the first time in six years. University of Oxford became the world’s top university, replacing California Institute of Technology (Caltech), which was pushed to second place. It’s the first time in the 12-year history of the rankings that a non-US institution bagged the top spot.

Stanford University, University of Cambridge and Massachusetts Institute of Technology completed the top five list. In Asia, National University of Singapore was the best placed institution with a global rank of 24.

Although Indian institutions continue to perform poorly in the global education league table, the agency praised recent efforts by the government to improve the rankings of Indian schools.

“India’s strong performance is partly thanks to the country recognising the importance of participating in global benchmarking exercises; just last month the government launched a new funding-backed project aimed at catapulting Indian Institutes of Technology to the top of world university rankings," said Baty.

India has recently started a national ranking framework for different streams of institutions. The human resource development ministry has asked the IITs and the Indian Institutes of Management (IIMs) to work towards bettering their ranks and has offered them research aid.

IITs have also started reaching out to foreign students and faculty, which is a weak link in Indian institutions.

For example, IIT-Delhi has around 1% of its faculty from outside the country. At the Massachusetts Institute of Technology, foreigners make up more than 55% of faculty.

“In India institutions talk a lot about rankings but it does not get that much of weight in countries like the US. It’s not ranking but proper assessment, which is most important," said Vishnuteerth Agnihotri, a senior adviser at Educational Initiatives, a learning-focused firm.