Mumbai: Royal Bank of Scotland Plc.’s attempt to sell the Indian assets of ABN Amro Bank NV has run into a glitch after the Reserve Bank of India (RBI) declined to transfer its branch licences to a prospective buyer.

The banking industry regulator based its decision on the fact that the proposed transaction is a portfolio sale and not a bank buyout. “We have conveyed to the bank that branch licences are not transferable," said a senior RBI official who did not want to be named because he is not the official spokesperson. 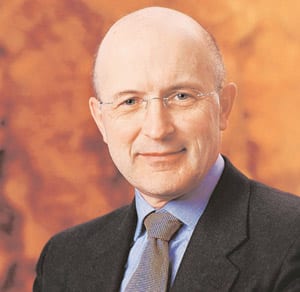 RBI’s refusal to transfer the branches to a buyer may affect the sale valuation although it may not stop the sale itself.

“The UK-based bank had valued ABN Amro Bank NV’s India operations at about $500 million (Rs2,425 crore)," said a merchant banker close to the development, who did not want to be named because he is involved in the deal.

“However, if the branches are not part of the deal, the valuation would come down drastically."

A senior official with ABN Amro, who also did not want to be named, said the bank had been contemplating the transfer of “some branch licences to the prospective buyer, but this has not gone (down) well with the regulator". RBI did not respond to an email sent to it.

An RBS spokesperson said in an emailed response: “We are well advanced with the process for the potential sale of RBS retail and commercial assets in Asia. However, due to regulatory constraints and the confidentiality of the process, we will not be commenting on any individual bidders or elements of the transaction process until its completion."

The Indian branch network is critical for the valuation of RBS assets because it is not easy for foreign banks to acquire branch licences in India.

Under World Trade Organization norms, RBI is expected to issue 12 branch licences annually to foreign banks, but it typically gives about 14 every year. Foreign banks, however, have been asking for more. 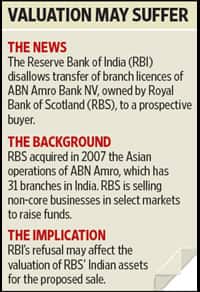 However, he had declined to say whether the bank would sell its branch licences or surrender them.

“In the meantime, it is business as usual at our branches and offices," the RBS spokesperson said. “Royal Bank of Scotland is committed to its customers and employees to ensure smooth transition of the businesses to the new owners once the transaction is announced."

There is no precedent for RBI transferring bank branch licences to a prospective buyer in the course of a portfolio sale.

Citing an instance of a portfolio sale, the RBI official mentioned earlier pointed to Bank of America Corp. selling its Indian retail banking division to ABN Amro in 2006. Only the retail business assets were transferred in that transaction; no branches were. Bank of America continued to expand its wholesale banking business in the country.

Transfer of branch licences has been permitted only in the case of a bank buyout. For instance, Standard Chartered Plc. in February 2008 acquired American Express Bank Ltd from American Express Co. for a cash consideration of $823 million. Since this was a global acquisition, the seven branch licences in India were transferred to Standard Chartered.

“The bank is now planning to adopt a cluster-based approach to sell its assets as there is no single buyer that is willing to buy the Asian assets. It is clear that there would be multiple buyers," said the merchant banker mentioned earlier.

“Asia is one such cluster and India would be sold separately," said another merchant banking official who is involved in the deal. The official also didn’t want to be named.

According to some news reports, Standard Chartered and HSBC Holdings Plc. have decided against bidding for the assets of RBS.

The merchant banker involved in the deal, however, said HSBC continues to be “a strong contender for the Indian assets".

Australia and New Zealand Banking Group Ltd, which raised around $2.9 billion to support the RBS asset acquisition, is the “front-runner for Asian assets excluding certain markets such as China", added the merchant banker.