Thanks for Visiting Mint
You seem to have an Ad Blocker on. Please turn it off in order to continue, or whitelist Mint
HOW TO TURN OFF AD BLOCKER
OR
REFRESH IF YOU ALREADY TURNED OFF THE AD BLOCKER
Home >Home-page >US, India stand united against terror: Obama

Mumbai: The United States and India stand together against terror, visiting President Barack Obama said Saturday, after meeting the families of victims and survivors of the deadly 2008 Mumbai attacks.

Obama spent time with those affected by the attacks nearly two years ago at the luxury Taj Mahal Palace hotel, which was the focus of the wave of strikes on the city that left 166 people dead and more than 300 others injured.

“Mumbai is a symbol of the incredible energy and optimism that defines India in the 21st century," the President said in a speech outside the hotel near the landmark Gateway of India monument.

“Ever since those horrific days two years ago, the Taj has been the symbol of the strength and the resilience of the Indian people.

“We visit here to send a very clear message: that in our determination to give our people security and prosperity, the US and India stand united." 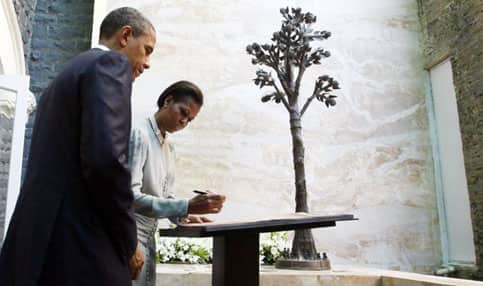 Obama, flanked by his wife, First Lady Michelle, earlier spent time at the permanent memorial to the 31 people who lost their lives at the Taj itself and signed the book of condolence.

The couple looked solemn as they read the names of those who died when the seafront hotel was stormed by gunmen on the evening of 26 November 2008 and fought a battle to the death with crack commandos outside.

“We will never forget the awful images of 26/11, the flames from this hotel that lit up the night sky," Obama said of the attacks, which have been likened by some in India to the 11 September 2001 strike on the United States.

“We will never forget how the world, including the American people, watched and grieved with all of India."

But he added that the “resolve and resilience of the Indian people stood in stark contrast to the savagery of the terrorists".

Both countries can look to the future with confidence that “history is on our side because those who target the innocent, they are for nothing but death and destruction," he said.

“What we seek to build is to welcome people of different faiths and backgrounds and we offer our citizens a future of dignity and opportunity," he added.

“That’s the spirit of the Gateway behind us, which in its architecture reflects all the beauty and strength of different faiths and tradition which has welcomed people to this city for a century."

Obama said India and the United States were working closer than ever to stamp out extremism and bring those responsible to justice and looked forward to deepening counter-terrorism ties further on his visit.