Kolkata: Microfinance firms, institutions that give small loans to poor people, have agreed on a voluntary credit code to ensure that the boom in lending to the unbanked does not lead to loan losses.

Listen to Vijay Mahajan, Chairman of the Microfinance India Network, talk about the measures being taken by microfinance lenders

Among key decisions taken at a meeting in Mumbai on 7 December were not to offer above Rs50,000 to any single borrower and not more than three lenders lending money to one individual. 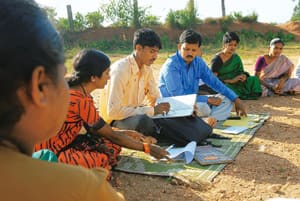 New code: A file photo of area managers at a weekly meeting with borrowers in a village near Mysore. Microfinance firms have decided not to offer above Rs50,000 to any single borrower to avoid loan losses.Hemant Mishra/Mint

Microfinance firms lend to subprime borrowers and these tiny loans are not backed by any collateral. Once a borrower’s overall debt to such institutions is capped, the risk of default will come down.

After months of deliberation, the code of conduct was finalized at the December meeting. It will be enforced by Microfinance India Network (MFIN)—an association of microfinance lenders.

In a parallel development, around 30 microfinance lenders jointly took a 5% equity interest in High Mark Credit Information Services Pvt. Ltd, a company that has obtained in-principal approval from the Reserve Bank of India to offer credit information services.

“Proper enforcement of the code of conduct would lead to greater financial inclusion," said Vijay Mahajan, chairman of MFIN and founder of Bharatiya Samruddhi Finance Ltd, better known as BASIX—one of India’s biggest microfinance firms. “The aim is to stop multiple lending, which leads to delinquency."

Mahajan added that he, along with the heads of two other leading microfinance firms—P.N. Vasudevan, managing director of Equitas Microfinance India Pvt. Ltd, and Suresh Gurumani, chief executive officer (CEO) of SKS Microfinance Ltd—were the key proponents of the code.

Incidentally, SKS is set to enter the capital market with an equity issue sometime next year, and quite a few others will follow suit. Many of them are now being backed by private equity funds. MFIN will keep a close tab on lenders.

“We will write to errant lenders and even to institutions from which they borrow if despite persuasion they do not fall in line with the code of conduct," said Mahajan.

Though microfinance lenders in India claim that non-performing assets (NPAs) are less than 1% of their loan portfolio, one in three such lenders suffered losses in fiscal 2009, according to a study of some 230-odd players by ACCESS Development Services, a not-for-profit organization that offers consulting services to the firms. Most of those that made losses were small lenders or start-ups with a portfolio of under Rs5 crore.

The report says “unbridled expansion tactics" resulted in people being offered more money than they could repay. It cites defaults in the Kolar district of Karnataka, which accounts for almost half the NPAs of microfinance lenders.

“A lot of people, in their bid to expand fast, lend without appraising risks," said Chandra Shekhar Ghosh, managing director of Bandhan Financial Services Pvt. Ltd. “It is not only bad for the lender, it has implications for the entire microfinance industry." Bandhan’s borrower base as well as loan book grew by at least 90% in 2009.

Even though the industry is growing at a phenomenal pace, “India remains an underpenetrated market, and there’s room for more players," said Rajiv Sabharwal, executive director at Sequia Capital India Advisors Pvt. Ltd, a venture capital firm that has invested in the microfinance industry.

“The code of conduct isn’t a corrective step... Past performance of the leading microfinance lenders is excellent. They now want to make sure that the future is just as good and that performance didn’t suffer because of indisciplined lending," Sabharwal added.

Siddharth Das, CEO of High Mark Credit, said: “We intend to develop services for microfinance lenders which would help them assess creditworthiness better."

Till now, microfinance lenders were appraising credit risks on their own, and this is the first attempt to start institutional assessment of borrowers’ creditworthiness.