RBI warns of inflation amid growth

RBI warns of inflation amid growth

Mumbai: The Reserve Bank of India (RBI) on Monday said in a quarterly report on the Indian economy that the smart rebound in industrial production is driving a modest recovery in output even as it warned that inflationary pressures have started to emerge.

The report was released a day ahead of the central bank’s review of its monetary policy that is to be announced by RBI governor D. Subbarao on Tuesday. 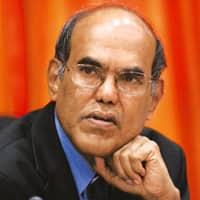 Even though the central bank’s economic reviews do not offer any direct clues about monetary policy decisions, RBI said in its report that balancing between the conflicting goals of supporting economic growth and capping inflation will be a complex task in the months ahead.

The central bank also released the latest estimates from its regular survey of professional forecasters. These economists polled by RBI have cut their estimate for economic growth in the current fiscal year from 6.5% to 6% and have raised their inflation forecast for the fourth quarter of the current fiscal from 5.4% to 6.8%.

RBI will release its internal estimates of growth and inflation on Tuesday.

Even as it pointed out to the revival in industrial production in recent months and the fact that some leading indicators suggested that the services sector too had started accelerating, RBI added that foreign trade continues to be sluggish and the combination of drought and floods is likely to cut the kharif (summer crop) and drag down the overall growth rate of Asia’s third largest economy.

A lot depends on the rabi (winter crop), the central bank said and added that rabi production may partly reverse the shortfall in kharif production if climatic and north-east monsoon conditions remain favourable.

Shubhada Rao, chief economist at Yes Bank Ltd said: “Agriculture will continue to be a drag and the dip in private consumption demand could also pose a threat to growth prospects... The Reserve Bank of India is concerned about the strength of the recovery despite some signs of pickup in capital inflows and improvement in water table and good sowing of the rabi crop."

Sumita Kale, chief economist, Indicus Analytics Pvt. Ltd said: “Crude prices hitting $80 per barrel and impending supply side pressures could force the Reserve Bank of India to raise its inflation forecast. We would see the wholesale price based inflation moving up faster than expected because of the impending base effect. The Reserve Bank of India will be cautious in its policy statement and prepare the ground before it could reverse its policy stance."

RBI flooded the Indian financial system with liquidity in the aftermath of the credit crunch that arose in the last three months of 2008 as foreign investors pulled money out of emerging markets such as India after the collapse of investment bank Lehman Brothers. 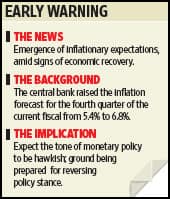 Despite the repeated reduction in policy rates by the RBI, the flow of credit to the private sector remained sluggish due to subdued overall private consumption and investment demand. Annual credit growth for the week ended 9 October was 10.75%, a 12-year low. The central bank mopped up an average Rs100,000 crore a day of surplus liquidity during the second quarter of the current fiscal year.

Subbarao in a series of recent speeches has hinted that the extraordinary monetary accommodation will have to be rolled back as growth recovers and inflation rears its head.

However, most economists and bankers do not expect him to bite the bullet in Tuesday’s monetary policy announcement.

“We expect the tone of the monetary policy statement to be far more hawkish than earlier. The central bank is expected to maintain status quo on key policy rates. The Reserve Bank of India would defer interest rate action till April 2010," said Rao.

She also expects the regulator to revise upwards its inflation projection from the earlier stated 5% by end-March 2010.

Samiran Chakraborty, head of India research, Standard Chartered Bank said: “The Reserve Bank of India would not want to stick its neck out on either side on the policy announcement as yet. The central bank will maintain status quo as the recovery continues to remain subdued and inflation remains a possible threat."