Mumbai: India’s fourth largest computer services firm, HCL Technologies Ltd, reported a 10% decline in net profit for the quarter ended September, on the back of a foreign exchange loss of Rs151 crore, although its operational performance matched that of its larger rivals in a rebounding market for information technology (IT) services. 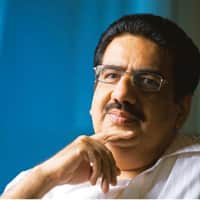 On track: HCL’s Vineet Nayar said that since the global economic crisis started in September 2008, HCL had grown its business 19.4%. Madhu Kapparath / Mint

HCL’s profit was eroded by losses it incurred on long-term foreign currency hedge positions taken in 2007 when the rupee was appreciating rapidly, denting the dollar-denominated earnings of IT firms and spurring them to hedge against a further advance in the value of the Indian currency. The rupee has since declined equally sharply against the dollar.

HCL reported revenue of Rs3,031 crore, up 29% over the same period last year and 4.2% over the previous quarter. Its forex loss widened from Rs89 crore in April-June and Rs80 crore in the September quarter of the previous year to Rs151 crore.

“They are slowly coming out of the hedge position, and are likely to take smaller hedges of shorter duration," said Nitin Padmanabhan, an analyst at Centrum Broking Pvt. Ltd in Mumbai.

HCL’s bigger rivals Tata Consultancy Services Ltd (TCS), Infosys Technologies Ltd and Wipro Ltd reported higher profits in the same quarter, both from a year earlier and sequentially, as they benefited from a revival of demand for technology services in the US and European markets.

For the same period, Infosys and Wipro had reported foreign exchange gains of Rs85 crore and Rs23 crore, respectively. TCS had reported a forex loss of Rs113 crore for the three months to September.

While announcing financial results for the year ended June, HCL’s executives had said they estimated foreign exchange losses to the tune of $127 million for its current fiscal year ending June. The company’s hedge positions declined from $813 million at the end of June to $725 million at the end of the September quarter.

The rupee was trading at 47.37 per dollar on Wednesday. The currency has declined almost 22% against the dollar since the start of 2008.

“Back when they took the hedge positions in 2007, everybody was expecting the rupee to appreciate to 35 levels to a dollar. But from around 39 levels, it has sharply depreciated to 48 levels, which was not quite expected," said the head of equities research at a Mumbai-based brokerage and investment advisory services firm.

The same person, who didn’t want to be identified because he is not authorized to speak to the media, added that investors had factored in HCL’s foreign exchange losses, which aren’t likely to dent the valuation of the firm’s shares.

Excluding the forex losses, HCL’s profit would have been Rs470 crore, up 8% over the same period last year and 12% over the June quarter.

On Tuesday, HCL’s executives said the company continues to focus on large deals and taking “market share away from leading global players in the field".

Chief executive Vineet Nayar said that the since the global economic crisis started in September 2008, HCL had grown its business 19.4%, which translates into a revenue addition of about $375 million, “while the rest of the industry has shrunk".

“US$ revenue growth at 3.8% QQ (sequential) has come at the top end of peers, where growth has ranged between 2.9-3.9% QQ," Nimish Joshi, an analyst with international investment advisory CLSA Asia Pacific Markets, wrote in a post-results note to clients.

“Infrastructure services has been the key growth driver, delivering a 14% plus QQ growth. Large deals in the infrastructure space which were signed earlier in the year seem to be delivering results," Joshi wrote.

K. Raghu in Bangalore contributed to this story.