Vadodara: Radheshyam Soimi Kahar has been battling the Employees’ State Insurance Corp. (ESIC) for 10 years for compensation. That would help supplement the Rs1,500 a month he gets as a watchman for the municipal department in Vadodara.

The city in Gujarat used to be an old economy textile hub before it transformed itself into a chemicals, bulk drugs and engineering powerhouse, home to companies such as Sun Pharmaceuticals Industries Ltd and multinationals such as Bombardier Transportation India Ltd and Alstom Projects India Ltd. Hema Chemical Industries was one of the smaller companies that existed under the shadow of these giants, making compounds containing chromium. 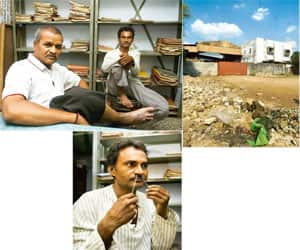 Chemical fallout: (clockwise from above left) Ram Kailash Saroj, a worker at Hema Chemical who lost a toe owing to an ulcer after being affected by toxic fumes, with Radheyshyam Soimi Kahar, who has been battling against ESIC; a closed Hema Chemical factory in Vadodara; Kahar tugs a thread through the perforation between his nostrils. This was something he had to show ESIC officials in order to prove his disability. Ramesh Pathania / Mint

“It always used to be hot inside, breathing was difficult because of all the chemicals," he said of his former workplace.

Kahar worked for 15 years at the unit in the Gorwa Industrial Estate for Rs70 a day. He frequently suffered from bouts of cold and fever, and his nose constantly itched.

At least 42 other workers employed at two of the company’s plants, closed since 2000 due to environmental pollution, suffered “nasal septum perforation" or the destruction of the delicate wall that divides the nostrils.

Nasal perforations weren’t the only ill effects of the chemicals. One of Kahar’s colleagues, Kiran Singh Chauhan, died in 2000. A National Institute of Occupational Health (NIOH) survey showed that Chauhan suffered from “ulcers, perforation and urinary complaints".

Prolonged exposure to chromium is known to attack the nose, lungs and liver. It can also damage the kidneys and cause ulcers if wounds get infected.

Chromium exposure among the 176 employees surveyed in the 2000 study showed 24 had nasal perforations (voluntary groups say the number is higher at 43, but many had left their jobs by the time the study was conducted).

Kahar, and a dozen of his colleagues, started their bid for recompense a decade ago. Their experience illustrates the difficulties in getting compensation in the current environment.

Workers in registered factories that employ more than 20 people are usually entitled to medical insurance towards which both the employee and employer make premium payments. The health insurance plans are regulated by state-run ESIC, but workers often give up their compensation claims midway for lack of time and money.

In the case of the Hema Chemical workers, ESIC fixed the loss of ability to work at 0-15% of the monthly wage after assessing injuries that included nasal perforations and foot ulcers. 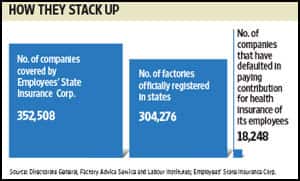 The workers contested the award with the support of the Vadodara Kamdar Union, backed by voluntary bodies such as the People’s Training Research Centre and the Paryavaran Suraksha Samiti.

The matter, according to Padmakar Ganpathrao Malvankar, a lawyer specializing in labour law and currently handling at least 15 cases dealing with the ex-employees of Hema Chemical, has been lying in “cold storage".

The government’s Medical Appellate Tribunal, which is supposed to assess physical injury, has not been constituted for more than three years. Labour suits, according to Malvankar, are regarded as the least important variety of litigation. High courts, already saddled with a mountain of cases, are unwilling to entertain them.

This is compounded by gaps in the state machinery. With doctors not represented in factory inspectorates, incidence of fresh occupational diseases is rarely detected.

“The government generally washes its hands (of the issue), saying the labour tribunal should take up such cases," Malvankar said. Insured workers can move the ESIC court if they wish to contest the compensation offered by the organization. In case both sides fail to reach an agreement, the aggrieved party can file an appeal before the Medical Appellate Tribunal.

Mahendra K. Patel, owner of Hema Chemical, which according to the company’s official website has a turnover of $3 million (Rs14.04 crore), refused to speak to Mint.

According to ESIC’s 2007-08 annual report, more than 10 million people were covered under the government agency’s insurance plan. Officially registered factories lag substantially behind the 352,000 covered by ESIC; the number of registered factories in the country—304,000.

But a large number of companies do not make payments to enable access to medical benefits for workers. Companies owe nearly Rs800 crore to ESIC in payments, according to two officials from the government agency. The organization’s 2007-08 annual report says 18,248 payment cases are pending.

But problems about providing medical services and collecting contributions from companies continue to beset the organization because of the dual responsibility it shares with state governments. ESIC pays Rs900 per insured person every year to the states towards medical services in hospitals, which are managed by the state governments. ESIC also shares the cost of paying wages to medical staff with states, and bears the cost of setting up the initial infrastructure and land.

According to the two ESIC officials who didn’t want to be named as they aren’t authorized to speak to the media, about 200-250 insured persons complain about delayed medical assistance or services denied every month.

Nearly five out of 10 cases at the Vadodara ESIC court concern delayed compensation, but assessing disability can at times take as long as four-seven years, sometimes even longer.

Bharat T. Majmundar, a Gujarat high court advocate, recalls a case that took nearly 20 years to reach a verdict in favour of the workers. In 1987, he agreed to represent 150 people suffering from silicosis and employed at Vadodara-based drug company Alembic Chemical Works Co. Ltd (now Alembic Ltd). The company did not reply to an email. (Silicosis an incurable lung disease caused by inhalation of silica dust that is released during operations in which rocks, sand, concrete and some ores are crushed or broken.)

After ESIC awarded 0-10% disability in 87 of the 150 cases, workers challenged the order in the appellate tribunal, which raised it to 15-25% in 1992. The case later went through a string of appeals until it reached the Gujarat high court.

When the court ruled in favour of the workers, who had sought 100% compensation, in 2000, ESIC moved the Supreme Court, which in 2006 rejected the appeal. ESIC ultimately paid a total compensation of Rs2 crore to the workmen. “About 25 workers had already died by then," said Majmundar. But the other 45 appeals, which were not examined by the medical board, are still pending.

“The whole principle of compensation revolves around manifestation and how much loss of working capacity a worker undergoes due to a physical injury. X-rays of victims cannot talk about loss of vital capacity", but the findings should address such issues, Patel said.

According to a right to information petition filed by Mohit Gupta, coordinator at Occupation and Environmental Health Network of India, a body of non-profit groups committed to promoting the use of safety gear and engineering tools in mines and industry, at least seven out of 10 ESIC regional offices, including Ranchi in Jharkhand and Kanpur in Uttar Pradesh, said no cases of occupational disease had ever been reported in the last 10 years. Both are areas where industries such as mining and leather, notorious for lax safety standards, are extensive.

The Paryavaran Suraksha Samiti, which has been waging a separate struggle to get Hema Chemical to clean up more than 45,000 tonnes of chromium waste on its premises, believes workers would benefit if that gets off the ground. In 2004, a monitoring panel set up by the Supreme Court had asked Hema Chemical to pay Rs17 crore for the clean-up and barred owner Patel from either leaving the country or selling company assets, according to court filings.

“If the factory shed has such a high amount of toxic waste, employees working here were the most vulnerable. We will demand 100% loss for injury because many of them cannot get a job when employers find out they have nasal perforation," said Rohit Prajapati, the organization’s founder.

Laxman Raoji Solanki, 47, is among three of the 15 workers with nasal perforations who have decided to opt for the ESIC offer of Rs170 a month. The father of three, who worked at the company for 18 years, makes about Rs80 a day as a construction labourer. At his home in Gorwa Gom, a slum across the road from the industrial estate where he used to work, he said he gets frequent headaches and coughing fits, which keep him away from work. His abiding regret, he said, is being unable to have earned enough to provide a good education to his three sons, aged between 17 and 22.

Others such as Ram Kailash Saroj, who needed to have a toe amputated owing to an ulcer, refused to accept the offer, which worked out to Rs200 a month. His 80-year-old father, Naresh Saroj, employed in the same factory, has a nasal perforation. It makes him angry that his father cannot get compensation because he retired before the NIOH medical survey. “We have suffered for long," said Kailash. “We want our settlements fast."