Khambhat, Gujarat: Mukesh Chaganbhai, 34, is dying. There’s sand in his lungs from years of cutting and polishing the agate stones that go into everything from junk jewellery to landscaped gardens. Silicosis struck him and wife Sheetal, 30, a year ago.

The couple have four children. The two youngest ones, aged seven and five, have been sent to stay with Sheetal’s parents. With the disease eating away at his lungs, Chaganbhai’s stick-like figure is wracked by coughing fits, breathlessness and fever.

Chaganbhai said he cut and polished stones for 17 years, partly because he needed to pay off a loan of Rs10,000 taken by his father; he was still repaying that until the silicosis struck. Chaganbhai’s parents and elder brother have already died from the disease. So have the five workers that Chaganbhai employed. 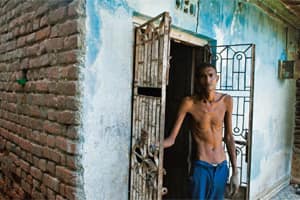 The clock is ticking: With silicosis eating away at his lungs, Mukesh Chaganbhai’s frame is wracked by coughing fits, breathlessness and fever. His main worry is about his children’s welfare. Ramesh Pathania / Mint

The children are his biggest worry—he doesn’t know who will provide for them when he dies.

The people of Shakarpur, close to the Gujarati trading town of Khambhat on the Arabian Sea, have for generations been polishing agate rocks, known for their colourful streaks and the ability to take on a smooth finish.

The finish is achieved by a process of dry grinding that throws up fine dust particles. Years of inhaling this dust causes the silicosis that kills the polishers.

Since 2005, the disease has killed 109 people in this village, the highest incidence reported in the state, according to People’s Training Research Centre (PTRC), a non-profit group, which provides medical aid to patients and supports a day-care centre for children of agate workers here. The workers have no social security cover nor do families get any compensation if the breadwinner dies. Nationwide, silicosis has been documented in medical surveys since the 1940s when cases were recorded at the Kolar Gold Fields. A 1991 survey carried out by the Indian Council of Medical Research (ICMR) estimated that more than three million people, mostly coal, manganese and zinc miners, were found to be having the disease.

The disease was also found among workers at quarry sites and slate and glass units. A report by the Ahmedabad-based National Institute of Occupational Health (NIOH), under ICMR, said at least 10 million people in India are at risk from silicosis.

Yet, these afflicted workers remain largely invisible in the records of the labour ministry. A question in the Rajya Sabha in July this year drew a blank on the prevalence of occupational diseases, let alone silicosis, across India’s states. But the lung affliction is gaining national focus as activists begin to file lawsuits to draw the attention of the government. The lack of any social security cover for workers catching the deadly disease, among the 29 listed in the health insurance plan of the Employees’ State Insurance Corp. (ESIC), has led activist Sharafat Ali Azad to wage a long court battle.

Between 2003 and 2006, Azad’s People’s Rights and Social Research Centre (Prasar), which has worked among the stone crushers of Haryana, moved the National Human Rights Commission (NHRC) to demand implementation of labour laws and compensation for victims. Around 15 cases have been filed against states such as Gujarat, Delhi and Rajasthan. The organization has also filed cases against the three Central ministries, including labour and employment, and social justice and empowerment demanding social security for workers in factories where silicosis-causing dust is present. Last year, NHRC and Prasar became co-petitioners in the case in the Supreme Court, which observed that a national survey needs to be carried out to estimate the prevalence of the disease. As occupational disease cases rise, information continues to remain scarce. This absence of reporting is creating another problem: an inability to map the country’s industrial diseases.

“We have not been able to estimate the magnitude of the problem because of the absence of structured data," said P.K. Nag, director, NIOH. “Unless the informal sector is regulated, the problem will continue."

The difficulty of keeping track is exacerbated by the fact that people with terminal illnesses leave their workplace to return to the towns and villages they hail from.

“Many of the workers are migrants who travel to other states for jobs, but go back home to die," said Azad, who also filed a Right to Information (RTI) petition with the Directorate General of Mines Safety (DGMS) when the government of mineral-rich Jharkhand —home to India’s biggest coal mines—reported that no silicosis cases existed in the state. “The problem is worse for workers who are employed in the unorganized sector and have no option to get compensation."

According to DGMS, several mining companies, including Coal India Ltd (CIL), Hindustan Zinc Ltd, Hindustan Copper Ltd and Uranium Corp. of India Ltd have confirmed silicosis cases. This admission doesn’t reveal the full picture as a majority of the dust-generating units are not even covered under the Factories Act as things stand.

Hindustan Zinc issued a statement to Mint, saying no silicosis cases have been found among its workers. CIL hadn’t replied to an email at the time of going to press.

Getting convincing numbers about the spread of the disease is only part of the battle. Earlier this year, Shirishbhai Shukla, the state legislator who represents Khambhat, raised the issue in the Gujarat assembly. When he asked whether the state government was considering any plans to provide compensation to silicosis victims, the reply was revealing: No silicosis deaths have been reported in the state, the government said.

In Shukla’s marble-floored home in the main part of Khambhat town, a portrait of Narendra Modi, Gujarat’s chief minister, adorns the lobby. In a touch of unintended irony, the life-like image of the Bharatiya Janata Party leader has been produced using agate dust. Still, the legislator seems to have the best interests of his constituents at heart. Better processing methods could curb the rate at which silicosis is killing them off.

“I am hopeful the government will introduce new technology," said Shukla. “Workers should not suffer." Activists in Khambhat have been trying to promote a polishing technique that uses water, thereby drastically reducing dust levels. The technique wouldn’t add substantially to costs, but many in the agate industry, which has been estimated at Rs50-100 crore, don’t think silicosis is their responsibility. “The numbers of death are inflated. This happens because the workers do not wear masks provided by the government," said Kanubhai M. Shah, a local community leader. Several workers said they have not received any masks.

Others are more amenable to change. On a recent afternoon, a dozen agate traders met at PTRC’s offices to view how China’s agate factories successfully use the wet polishing technique. “This is good," said Harish Gandhi, president of Akik Udyog Association, representing the agate traders. “We are keen to buy this machinery." Some polishers continue to work in the agate industry despite the hazards because of the money it brings, said Rameshbhai Makwana, who works with PTRC.

“They know it’s dangerous. But working in a farm will earn them Rs50 a day, when agate pays anywhere between Rs150-200 a day."

Makwana, who used to polish stones until a year ago, gave up when he was diagnosed with the disease. For centuries, villagers have manually polished the stones. Some believe dust exposure grew with the arrival of electricity several decades ago, when workers switched to motor-driven polishing machines.

Workers say they have no alternative means of earning a livelihood, some of them having taken loans from traders.

Vijay Jagdish Melabhai, 19, is still struggling to repay the Rs15,000 he borrowed when his mother fell ill breathing silica dust last year. Melabhai has no illusions about his mortality, having seen too much of death around him. His father, Jagdish, has died from the disease. His uncle Rasik, wife Geetabehn and their three-year-old daughter died a few years ago because of the poison in the air. His neighbour across the road, Jeevanbhai, has also succumbed. And last month, Ramanabhai Vaghela, 39, who lives a block away, passed away, leaving his aging parents—Rewabehn and Lalobhai—to fend for themselves.

In the backyard of the two-room hut he shares with his 18-year-old brother, Melabhai turns the agate into smooth round pebbles. He has rudimentary tools—a rusty old motor that drives a rubber belt that grazes the rough edges off each stone, polishing it as sparks fly and the deadly dust billows. He earns Rs150-250 for making around 2,000-3,000 beads a day.

“I know I’m going to die one day," said Melabhai. “But I have no other job and we have to eat."