New Delhi: Bharti Airtel Ltd’s profit for the quarter ended June exceeded expectations on the back of lower finance costs, but the company’s revenue growth is slowing as it expands into rural India—a statistic that underscores both the importance of a merger deal with South Africa’s MTN Group Ltd and the imperative of moving to a business model, as mentioned previously by a senior Bharti executive, which cuts costs and connects better with rural customers.

Bharti and MTN, top telcos in India and Africa, respectively, by revenues, are in merger talks, the exclusivity of which ends 31 July.

Announcing the results on Thursday, Bharti Airtel reported a 24% increase in net profit to Rs2,517 crore for the April-June quarter, the first for this fiscal year, from a year ago, beating analyst expectations in a Mint survey that set earnings expansion at an average of 16.92% (the median or mid-point of the estimates was at 17.65%)

Part of the increase in profits was driven by a fall in finance costs. In the June quarter, Bharti Airtel reported interest income of Rs260 crore on account of changes in currency rates, compared with an outgo of Rs213 crore in the year-ago period.

Operating profit margins (calculated as a percentage of revenues) stayed at a healthy 27.35% in the quarter, broadly in line with the results in the past six quarters.

The effects of falling average billings of its customers weighed down on Bharti’s revenues. Such monthly billings, commonly referred to as average revenue per user (Arpu), contracted 20.6% to Rs278 in the June quarter from a year ago. 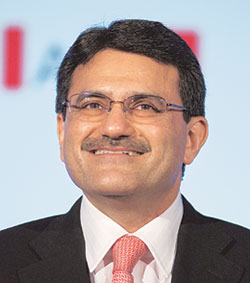