Mumbai: India’s fifth largest drug maker by sales, Piramal Healthcare Ltd, has sold its domestic formulations division, the most valuable part of the company’s pharmaceuticals business, to US drugs and nutrition multinational Abbott Laboratories for a valuation of $3.72 billion (Rs17,484 crore).

The deal will make Abbott India’s leading pharmaceutical company with a 7% share of the Rs40,000 crore drug formulations market, Michael J. Warmuth, senior vice-president at the established products division of Abbott, told Mint on Friday. “Abbott has a very long-term plan for India," he said. 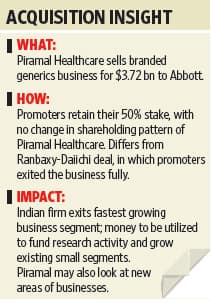 The deal comprises an upfront payment of $2.12 billion and $400 million a year for four years. Announcing the deal on Friday, Ajay Piramal, chairman of Piramal Healthcare, reiterated his commitment to stay invested in the pharmaceuticals business, albeit in the OTC (over-the-counter) segment, drug discovery, critical care and diagnostics space. Piramal started the pharma business in 1988 and has expanded it through organic and inorganic growth.

The deal has been put together in such a way that Piramal Healthcare’s promoters will retain their stake in the Indian company while divesting its key business. It marked the second largest merger and acquisition deal by valuation in the Indian pharmaceuticals sector after the $4.6 billion acquisition of the 38% promoters’ stake in Ranbaxy Laboratories Ltd by Japan’s Daiichi Sankyo Co. Ltd. Ranbaxy is currently the country’s largest drug maker by sales.

The Abbott deal is the fourth biggest acquisition of an Indian drug business by a foreign drug maker in the last three years.

Piramal justified the sale by saying that future value from the branded generics business would come from business growth outside India. “It is not a distress sale," he said.

The stock markets reacted negatively to the deal. Piramal Healthcare, which surged 9% on Thursday, fell after the deal’s details were released, shedding 11.81% to close at Rs502.35 on the Bombay Stock Exchange even as the benchmark Sensex index lost 0.45% to close at 16,445.61 points.

An analyst with a foreign brokerage said investors were concerned about the narrow growth potential in the firm now as it has lost the key business, which contributed around 70% of revenue, and was growing at 25% annually.

“The stock could fall further," said the analyst, who did not want to be identified. Another expert—who attended an analyst meet after the deal announcement—alluded to the transaction being tax inefficient, as the company would have to pay 22% capital gains tax and also a dividend distribution tax for the special dividend that will be paid after Abbott pays the first tranche.

The Abbott acquisition includes the entire portfolio of about 350 generic drug brands, 5,500 employees working in the division and a manufacturing plant at Baddi in Himachal Pradesh. Piramal’s portfolio of branded generic drugs cover multiple therapeutic areas such as antibiotics and neuroscience, besides respiratory and cardiovascular diseases.

All the cash from the deal will go into Piramal Healthcare and will be invested in existing business segments such as consumer healthcare or the OTC unit, the critical care segment and drug research, chairman Piramal said.

“There will even be new areas of business beyond pharma that the company may enter in future," he said without elaborating.

Analysts say the Indian firm will take time to incubate new businesses and even longer for returns to accrue. Piramal, however, expressed confidence that existing businesses such as patented products will make gains in the domestic market in two-three years. “We’re still in the over-the-counter space and we’re still committed towards drug discovery," he said.

The deal valued Piramal Healthcare’s domestic formulation business, also known as the healthcare solutions business, at nine times sales. The company’s sales from this segment was Rs2,000 crore in the year ended March.

Large foreign drug makers, including Abbott, Pfizer Inc., GlaxoSmithKline Plc. and Sanofi-Aventis, have been looking for acquisition targets in India as the country is one of the fastest growing drug markets among emerging regions.

Emerging markets represent one of the greatest growth opportunities in healthcare, with pharmaceutical sales expected to grow at three times the rate of developed markets and account for 70% of the industry’s growth over the next several years, said an Abbott release on Friday.

Abbott estimates the growth of its India pharmaceutical business with the addition of the Piramal division to approach 20% annually, with expected sales of more than $2.5 billion by 2020. The combined Abbott and Piramal sales force will be the largest in India, Warmuth said, adding that the price that it paid for the Indian business was just right.

The upfront payment is scheduled to be made by September, with the annual payments starting in 2011.

Abbott collaborated with Ahmedabad-based Cadila Healthcare Ltd recently to expand its generic drugs portfolio for global markets. The US firm’s nutrition arm last year signed an acquisition deal in India with troubled drug maker Wockhardt Ltd, but it later withdrew from the transaction due to issues linked to the Mumbai-based drug maker’s debt repayment litigations.