Bangalore / New Delhi: India’s second largest developer by market value, Unitech Ltd, is selling parts of its 14,000-acre land bank, leading a trend among realty firms putting up parts of their properties for sale to tide over a financial crunch and repay debt. 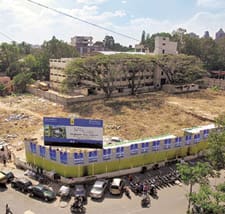 “We are selling some of the plots but not all of them," a company spokesperson said. “We have already sold two such plots." He declined to give further detail.

Unitech had earlier said it was looking at “monetization" of some of its completed properties to meet debt commitments. The company is trying to sell land parcels in Noida and Gurgaon, both on the outskirts of New Delhi, to meet its debt obligations, analysts say.

The developer has debt obligations worth Rs2,500 crore coming due by the end of March. Unitech is trying to raise funds to repay this debt through several measures such as selling some hotel, office and retail assets and by diluting equity at the company and at the project-specific levels.

Unitech, which is holding an extraordinary general meeting of its shareholders on Monday to seek approval for an enabling resolution to raise up to Rs5,000 crore through various means, has to repay Rs1,100 crore in the next two weeks and meet further debt obligations of Rs1,500 crore over the next three months, according to a 15 January report by BNP Paribas Securities.

“The management has hinted that it is in the process of raising Rs800 crore to tide over the near-term liquidity crisis," Sandeep Mathew, an analyst with BNP Paribas, wrote in the report. “Failure to do so could lead to forced sale of underlying assets (primarily land)."

In the heart of Bangalore’s business district, a 1.5 acre plot has been put up for sale by Sobha Developers Ltd, a leading developer in south India.

The land, strategically located close to the city’s main shopping and business district of MG Road, at the junction of Church Street and Museum Road, is a fetching piece of real estate in an area that is one of the most expensive in the country’s technology hub.

The builders, analysts said, have been trying to sell off the plot for the last four months, where it had initially planned a shopping mall and a hotel. But the high asking price of Rs120 crore has kept away buyers. The money will be pumped into Sobha’s under-construction projects that are delayed and to repay expensive loans.

Realty firms are looking at other avenues to manage cash flows as debt has become more expensive, analysts at Credit Suisse India Research said in a 13 January note. The report states that Sobha, for example, borrowed funds at 24-30% for short-term periods in October-November and seems to have defaulted on some repayments during this period.

Unitech borrowed at 19% in the same period. “These borrowings are due for payment in January which could become a problem for both Sobha Developers and Unitech as volumes in the property sector are yet to pick up. With mutual funds having stopped lending to this sector and private banks reluctant to lend, Sobha is selling off its ‘excess’ landbank," the report states.

Unitech and Sobha Developers are only two of many such cases of forced land sales in the past few months that have witnessed aborted land deals, low demand and few sales, pushing developers to defer launches, stall projects and scurry for cash to beat the financial slowdown.

“The Church Street land was bought on a 60-year lease period and the developer is planning to re-lease it away. But the sale price is too high," said a Bangalore-based real estate consultant close to the negotiations. The consultant didn’t want to be identified.

“These are land parcels that would have been bought in the last two-three years at steep prices and where construction hasn’t yet taken off. There are some buyers still—mostly high-net worth individuals—who can buy, but are hard bargainers. With demand being low, it is a buyer’s market now, putting developers in a tough situation," he said.

Tables have turned for developers, who till the beginning of 2008 would scout for land and pay steep prices. Not any more. “Today, I am flooded with proposals from builders wanting to sell some land assets. But where are the buyers?" asked Praveen Kumar, chief executive officer of One Third Earth, a property and land advisory in Bangalore.

“Many developers are selling the licensed land or developed/under construction projects to get working capital," said Manish Aggarwal, director, land and industrial agency, at consultancy Cushman and Wakefield India.

Developers are selling assets that will fetch the maximum price such as hotels, office or land licensed for residential group housing.

Land prices in the periphery of cities across India have on average fallen by 25-40% over the last few months, said Aggarwal. “Should the landlords or developers decide to price their products rationally, it is expected that there may be an interest for joint development, joint venture transactions for sellable projects starting from July-October quarter this year," he said.