New Delhi: Before the fourth season of the dance reality show Jhalak Dikhla Jaa started on Sony Entertainment Television (SET) this month, technicians from the Hindi-language channel flew to London and studied lighting techniques from counterparts who had worked on the show’s BBC version, Strictly Come Dancing.

“Our idea was to make the show look grand, totally different from the previous seasons," says Ajit Singh Thakur, executive vice-president and business head at SET, aired by Multi Screen Media Pvt. Ltd. “Our team studied everything, from set design to lighting, to create the show on a much bigger scale than before." 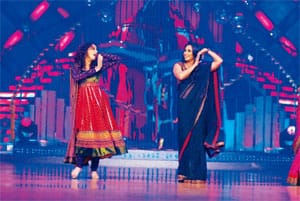 “The content you’ll see on our channel in the coming year will be bigger, better and grander on scale," said Thakur.

As Sony and other Hindi general entertainment channels (GECs) try to attract viewers with more lavishly shot programmes, their budgets are set to swell by 15-20% in the new year. It is not just scale that may add to their costs.

Hindi GECs are increasingly inclined to shoot their new shows in the high-definition format. And the growing trend of airing one-hour episodes interspersed with song and dance sequences for a cinema-like feel, opening up of new time bands (before and after prime time), and getting more celebrities on air will all contribute to increasing programming costs.

Television shows are set to scale up “as the landscape of story-telling grows", said Rajan Shahi, promoter of content production company Director’s Kut that has made several successful serials for the Star Plus channel.

Shahi shot the initial episodes of Chaand Chhupa Badal Mein, a soap about a young, motherless woman, in Shimla. He later replicated Shimla on a 35,000 sq. ft set in Mumbai’s Film City.

“Over 200 trees were planted, and the set has mountains, streams and wooden cottages with rooms," he said.

The estimated cost of the exercise: Rs3 crore.

The reason behind adding scale to programming is to attract viewers and beat the competition in the weekly battle for television rating points (TRPs), which, in turn, determine the advertising revenue earned by GECs.

Of the Rs10,000 crore of advertising expenditure on television, around 30-32% is claimed by the Hindi GEC genre. This will grow between 10% and 15% in 2011, said Mona Jain, chief operating officer of VivaKi Exchange, the centralized buying agency for Publicis Groupe SA.

Gulaal, a new Star Plus drama serial, has been extensively shot in the Kutch region of Gujarat. The central female character in the story has the unique gift of finding water in barren and dry desert land.

“Gulaal is a strong show for Star Plus, and, yes, it is expensive considering we are shooting it outdoors and making it as visually appealing for audiences," says Anupam Vasudev, executive vice-president (marketing) at Star India.

“Scale will be very important in storytelling and that will drive the fiction space further in 2011," says Santosh Nair, chief executive of UTV Television, the content arm of UTV Software Communications Ltd. “So far, non-fiction space has seen scale, especially with the participation of big stars from the Hindi film industry. But, going forward, you will see magnitude in the way stories are told in fiction space too." UTV Television is already shooting its new show in the HD format.

The opening up of new time bands is also driving up programming budgets of broadcasters. Zee TV, run by Zee Entertainment Enterprises Ltd, for instance, opened up the 6-7pm band just last month with two shows, Bhaagon Wali and Geeta.

Star Plus launched fresh shows in the 11pm-12am band with shows such as Kaali Ek Agnipariksha and Maryada: Lekin Kab Tak.

“Between 9pm and 10pm, there are huge volumes (in content), and it’s natural for channels to open the other time slots, including late-night slots," said UTV Television’s Nair.

Not just weekday time-bands, even weekends are getting a range of fictional programming. Sony, for example, has started Adaalat, a courtroom drama that airs on Saturdays at 8pm.

Creating the special or “maha episodes" every now and then isn’t cheap either. Regarded as the high points in the life of a serial, these are special episodes that rope in celebrity actors, are interspersed with special features, including song-and-dance, while moving the story forward.

Special sets and engaging choreographers and artistes, actors or singers who make an appearance in such episodes, add to the cost of the show.

Competition—not just between channels but production houses as well—is raising the expenditure. Aarakshan, a show on Imagine, the Hindi channel of Turner General Entertainment Networks India Pvt. Ltd, had its budget significantly raised for its first six episodes.

“Each episode costs Rs20 lakh because we needed to hook audiences. We spent partly from our own pockets because it was our first attempt in the GEC space," explained Ravindra Gautam, director and producer of RG Media and Entertainment Pvt. Ltd, a year-old TV production company.

Saurabh Tewari, head of programming at Imagine, said broadcasters should make sure they do not spend needlessly on fictional shows. He and others in TV broadcasting are not sure if the increase in costs can be recovered by broadcasters.

Advertisers say better production values should be backed by viewership.

“Advertisers don’t hesitate to pay a premium for a quality product on a channel, but it has to be backed by comparable viewership numbers too," says a media buyer, who spoke on condition of anonymity: “Advertising revenue is separate from production value."

“It’s worth appreciating that broadcasters want to offer better production value to viewers," he says. “Quality programming—only if it can attract audiences—could bring in better advertising for broadcasters."