Thanks for Visiting Mint
You seem to have an Ad Blocker on. Please turn it off in order to continue, or whitelist Mint
HOW TO TURN OFF AD BLOCKER
OR
REFRESH IF YOU ALREADY TURNED OFF THE AD BLOCKER
Home >Home-page >A cut without conviction?

A cut without conviction?

A cut without conviction?

In many ways, the annual monetary policy for fiscal 2013, to be unveiled on Tuesday, will be one of the toughest for D. Subbarao since he took over as Reserve Bank of India (RBI) governor in September 2008 in the thick of a global credit crisis.

Most economists expect the Indian central bank to cut its key rate, for the first time in three years. Subbarao will probably oblige them, but RBI doesn’t seem to be fully convinced as yet that inflation will stay low for long, even though the risks to growth have increased. 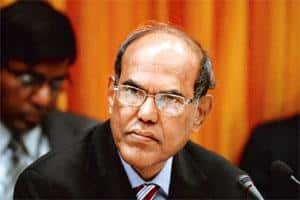 Growth apart, two key challenges before Subbarao in this policy are to manage liquidity and widespread expectations of a reversal in the rate cycle. RBI infused about Rs1.3 trillion into the cash-starved system last year by buying bonds from banks, through its so-called open market operations (OMOs), but nearly an equal amount was drained because of its intervention in the currency market. For every dollar it sells, an equivalent amount of rupees leaves the system.

The local currency, which lost close to 16% in 2011 against the dollar, has gained about 3.5% since January and yet it’s overvalued by any yardstick. Had RBI stayed away from the aggressive dollar sale and to some extent allowed the currency to find its own level, the OMOs would have had a positive impact on liquidity.

Similarly, RBI could have avoided giving guidance on its monetary policy stance. After a series of 13 rate hikes between March 2009 and October 2011 that raised the effective policy rate from 3.25% to 8.5%, in December the central bank had said it would “reverse the cycle", and in January it committed “to respond to increasing downside risks to growth".

After cutting banks’ cash reserve ratio (CRR), or the portion of deposits that commercial banks need to keep with the central bank, twice between January and March, it said, “No further tightening is required and…future actions will be towards lowering the rates." It’s now a prisoner of its own commitment.

The two-stage, 125-basis- points (bps) CRR cut infused around Rs80,000 crore into the system, but RBI insists this measure should not be interpreted as monetary easing as it has been using CRR as a tool to enhance liquidity. That has added confusion as historically CRR and policy rate have been the twin tools on which the Indian central bank’s monetary policy stance rests. After all, when money supply increases through a cut in CRR, it affects the cost of money. A basis point is one-hundredth of a percentage point.

As the cash infusion through OMOs was nullified by RBI’s dollar buying, it was forced to cut CRR to infuse money. The cash shortage in the system hit its historic high of Rs1.98 trillion one day in March and on average it had been around Rs1.4 trillion daily between January and March.

RBI’s stated policy stance is to keep the cash deficit in the system at about 1% of bank deposits. It hasn’t been able to keep the liquidity shortage at this level, and I will not be surprised if it quietly buries the target and instead keeps an eye on the overnight call money rate to gauge the liquidity status.

Those that do not have excess bonds can borrow up to 1% of their deposits at 9.5% through the so-called marginal standing facility. When liquidity scarcity becomes acute, the call money rate inches towards 9.5%.

Bankers are pushing for a deep cut in CRR to infuse liquidity. I will be surprised if RBI does so. After two cuts, CRR is 4.75%, 25 bps higher than its historic low. Technically, it can go down to any level, but a prudent RBI will probably not like to bring it down to below 3%. This means it can cut CRR by 175 bps. Going by the current deposit base of banks, this can infuse Rs1.12 trillion into the system.

RBI may not be in a hurry to cut CRR, as each cut—whether it dubs such an action a monetary measure or a liquidity injection—will increase its vulnerability and limit the scope of the next cut. With the government starting spending in the new fiscal, the daily liquidity deficit last week came down to around Rs80,000 and it may not rise dramatically till mid-June. When the government doesn’t spend, its money kept with RBI cannot flow into the system.

RBI will probably make public how much government funds are kept with itself and start measuring the cash deficit in the system by netting off the government’s cash balance. It is also pushing the government to auction such funds to banks. It may take a while to do so, but the revelation of government surpluses kept with RBI will help tackle short-term interest rates, as too much of a liquidity shortage pushes up short-term money market instruments such as commercial paper and certificate of deposit rates.

Wholesale price inflation, which ruled above 8% for 23 months between January 2010 and November 2011 and even came close to 11% once, started dropping in December. In February it was 6.95%; analysts expect it to come down to around 6.6% in March. Non-food manufacturing inflation, a proxy for core inflation, dropped to 5.75% in February and probably will fall to close to 5% in March. The figures will be made public on Monday.

The trend should encourage RBI to go for a rate cut, but the worry is that the inflation may not stay low for long. We have an inflationary budget that has raised indirect taxes. And if indeed the prices of diesel, kerosene and liquefied petroleum gas are raised, as promised by the finance minister, they will impact inflation. Even then, this is welcome, but the price hike still remains in the realm of possibility and the budget has not done anything significant for credible fiscal adjustments.

The 5.1% estimated fiscal deficit is based on one-off items such as the generation of Rs30,000 crore through the sale of shares of state-owned firms and Rs40,000 crore from the sale of radio spectrum and enormous under-provisioning for fuel subsidy. The government may end up borrowing more than the estimated Rs5.7 trillion, which is already a record high, and this will make RBI’s job more difficult.

Still, RBI will probably go for a 25 bps rate cut as otherwise it may miss the bus, as inflation could start rising again after a few months. A rate cut will formally signal a reversal in policy, but the pace of the rate cut will be tentative. Those analysts who have been predicting the depth of the rate cut through fiscal 2013—between 100 bps and 150 bps—may have to revise their estimates.

More than the rate cut, this policy will be critical for the central bank’s guidance. RBI will probably refrain from making any commitment and keep its options open, saying the future action will depend on the inflation trajectory and other macroeconomic developments, both domestic and external. The price of crude and the progress of the monsoon will play a critical role in shaping RBI’s stance.

If indeed the rate cut happens in isolation and is not combined with a cut in CRR, banks are unlikely to pare their loan and deposit rates. And since the market has already factored in a cut, we may not see any sharp drop in bond yields. But if RBI does not go for a cut, both bond and equity markets will react adversely.

RBI may keep the year-end target for inflation in the range of 6.5-6.75% and the growth in gross domestic product (GDP) at around 7%. The budget has estimated 7.6% GDP growth, but one hopes that the central bank is realistic in its assessment.