Yes: in Europe, Manchester United was onlythe sixth in spending onnew players.No: it spread its spending too thin and it didn't deliver wins and titles

The Special One has exited Manchester United, leaving behind another chapter in his grumbling narrative of him-against-the-world. If only I had more time. If only I had more money to buy players. If only I could buy the players I wanted. Time might not have been on Jose Mourinho’s side, but he had his fair share of opportunities with money.

In the top flight of European club football, where budgets are something that other clubs wrestle with, Manchester United was not the highest spender on new players. In the last two-and-a-half years—a period coinciding with Mourinho’s time as the manager—it was ranked only sixth in gross spending (£419 million). Above it were cross-town rivals Manchester City (£542 million), followed by Barcelona, Juventus, Paris Saint-Germain and Chelsea. 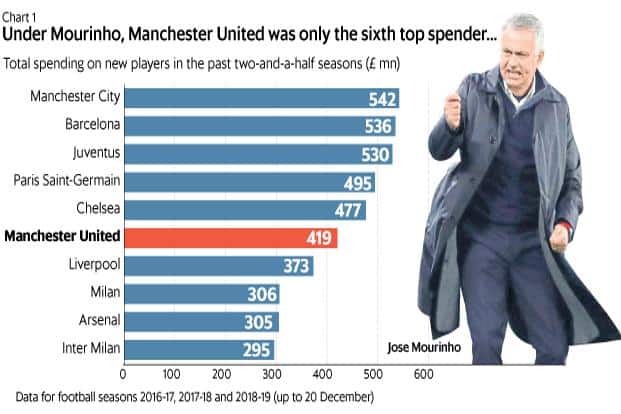 But there were two crucial differences between United’s acquisitions and those of other top clubs.

The first difference was that United’s spending was more concentrated than other clubs. It spent all that money to buy just 11 players. By comparison, the five clubs above it bought anything between 16 players (Paris Saint-Germain) and 29 players (Juventus, which also smashed its piggy bank to snap up Cristiano Ronaldo).

As a result, United paid, on average, £38 million to buy a new player under Mourinho. That’s about 20% more than the next top-spending club (Barcelona). It’s the same when we also include the three years preceding Mourinho, when United witnessed a generational shift in managers, with Alex Ferguson calling it a day after 26 years.

Even in this five-and-a-half year period, United is only the third highest-spending club in Europe, after Manchester City and Barcelona. But among the top eight spenders, it spread this amount across the fewest number of players. As a result, it averaged £31 million per new player—more than any other club.

The second difference was that all that big spending didn’t do what it was supposed to do: deliver wins and titles, while playing a brand of football reminiscent of Ferguson’s best teams—flowing, attacking, gritty and conjuring up moments of magic. 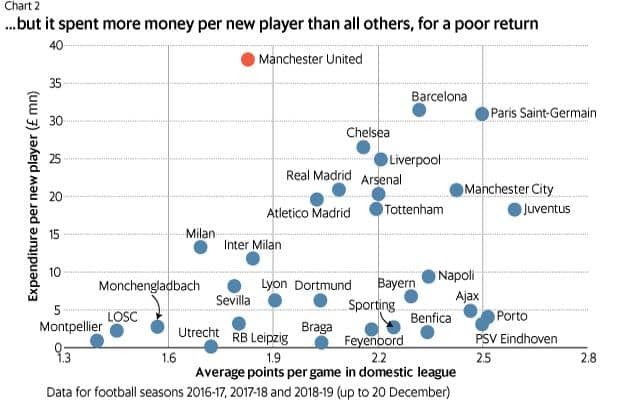 A juxtaposition of new signings with results in domestic league is one measure of just how well have these signings worked. We looked at this juxtaposition across the current top four clubs of six leading European leagues and top six clubs from the English Premier League (to bring in United into the picture) for the last five-and-a-half years. It highlights the many hierarchies in European football.

On the one extreme, there are the super-clubs that have no choice but to keep spending big, and they have the money to do so. Some deliver results (in this period, Barcelona or Manchester City), some don’t (United). At the other extreme, there are clubs dominating smaller leagues. If United spent £31 million per player to earn 1.8 points per game, in Portugal, Porto delivered 2.5 points per game each while paying an average of £4 million for a new signing and Benfica 2.3 points with £2 million. In the Netherlands, PSV Eindhoven and Ajax also delivered 2.5 points per game while paying a new signing £3 million and £5 million, respectively.

Between those two extremes are clubs that manage the deft balance between operating in a top league, delivering solid results while practising restraint on their cheque books. Three big clubs that have done this with élan are Juventus in Italy (2.6 points, £18 million), Bayern in Germany (2.3 points, £7 million) and Tottenham in England (2.2 points, £18 million).

The chasm between a Porto and a United has a lot to do with the size and competitiveness of leagues.

A four-step hierarchy can be seen in how much top clubs in the first division are willing to pay for new signings. England exists on its own. Spain and Italy are some distance away. Then, there’s a drop to Germany and France. And then, an even larger drop to Portugal and the Netherlands. 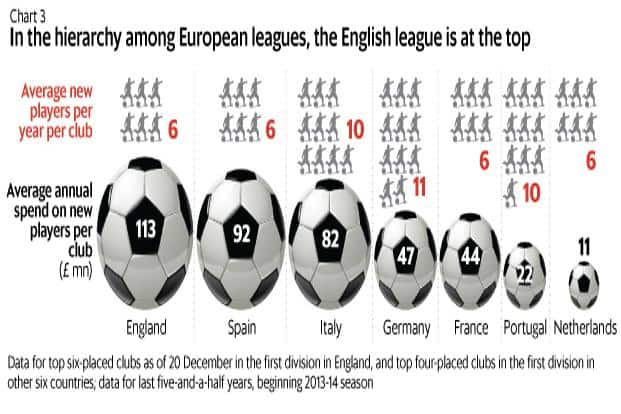 And, other than the bottom of that hierarchy, the others don’t mind spending more on new players than what they earn by selling players. Come 1 January, the winter transfer market will open, and clubs will jostle for new signings for a month. As for Mourinho, he will probably be back. There’s a big club in Spain he knows all too well that is in a state of drift.

And when it comes to the business of spending, no one does it bigger and grander than Real Madrid.