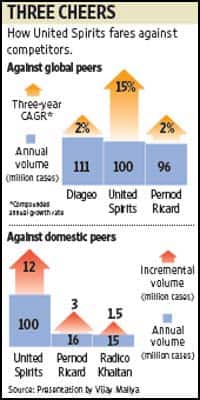 UB Group’s liquor sales by volume have multiplied 33 times in Mallya’s 27 years at the helm. Mallya became chairman of the group after the death of his father Vittal Mallya in 1983, when the group sold a mere three million cases of spirits a year, besides four million cases of beer.

“We have come a hell of a long way," the flamboyant Mallya, now 54, said at a news conference on Wednesday at the company headquarters, UB Towers.

The firm acquired its closest rival, Shaw Wallace and Co. Ltd, in 2005, gaining brands such as Royal Challenge whisky and White Mischief vodka.

In 2007, Mallya paid the equivalent of $1.18 billion (around Rs5,240 crore today) to acquire Scotch whisky distiller Whyte and Mackay Ltd, gaining brands such as W&M Scotch and Jura single-malt to add to USL’s offerings that include Bagpiper whisky and Celebration rum.

With its current network of 80 distilleries spread across over 20 states in India, more than 90% of its sales are not subject to inter-state taxes, a luxury that none of USL’s competitors enjoy.

The company is confident of leapfrogging Diageo as soon as within a year. “With Diageo growing at 2% and USL at 10-15%, we should be number one within a year," said Ravi Nedungadi, chief financial officer of UB Group.

The challenge from here on is to continue to drive profitability, said Nikhil Vora, managing director at brokerage firm IDFC SSKI Securities Ltd.

Nedungadi said the group’s airline Kingfisher Airlines Ltd would raise more than $100 million through a sale of global depository receipts to investors, without disclosing an exact timeline.

“We hope to be Ebitda (earnings before interest, taxes, depreciation and amortization) positive in this fiscal," the CFO said. Ebitda is a measure of operating profitability.

The funds raised would amount to about Rs450 crore; Rs200 crore of it would be parked in Kingfisher Airlines’ balance sheet to turn the company net-worth positive, and the remaining would go to fund expansion. Debt was reduced by Rs600 crore over the last eight-nine months, said Nedungadi. The airline still has more than Rs7,000 crore of debt, he said.

Mallya said he was very comfortable with USL’s debt levels. The liquor maker, which had been burdened by debt following the acquisition of Whyte and Mackay, had pared it from Rs7,360.80 crore in March 2009 to Rs5,509.40 crore in December 2009.

With Whyte and Mackay’s contract of supplying bulk whisky to Diageo having ended in March, Mallya is now eyeing higher margins.