Seventy-five-year-old Nara-yana Iyer and his 68-year-old wife, Muthulakshmi, wake up early every morning with the hope that the day will bring death.

They have been hoping for 20 years.

At the Shri Shankracharya Swamigal Mutt, Iyer sits on a single cot in his tiny room, one wall covered with pictures and idols of gods, and asks just where Shiva is in this city believed to be blessed by him.

“We pray to Shiva to take our lives. Every day, all day. But Shiva does not listen," said Iyer. “What to do? It is his will. We don’t give up." 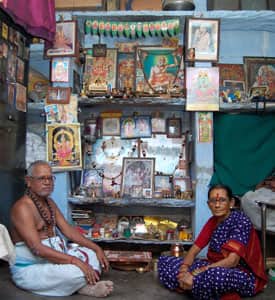 For centuries, thousands have landed in this city to spend their final days. But now, as the average life expectancy of Indians has increased—from 50 in 1975 to 64 in 2000—those who arrive here thinking they have a few days left end up staying years.

This phenomenon has raised ethical questions among doctors about just how much they should treat the sick and elderly who have come to die; it also has helped spawn an underground market of doctors willing to end life for a price in a country where euthnasia is a crime.

It is believed that if a person dies in Varanasi—defined as the old city between the rivers Varuna and Assi—he will be redeemed of all sins by Lord Shiva on the cremation pyre.

Locals say the belief is so powerful that those who do not have the resources to wait for years simply jump into the Ganga or commit suicide.

Others quietly talk about doctors administering mercy killings to residents of the ashrams.

Some doctors don’t mind admitting it, though.

In a phone interview with Mint, Dr Sanjay Yadav at Meridian Hospital in Varanasi matter of factly recounted a fatal injection administered, for a fee, to a 20-year-old who wanted to die. Asked repeatedly about the the legality of such a move, Dr Yadav simply repeated “chalta hai" (it happens). He would only say that the patient was “uncomfortable."

Familiar with the short cuts by now, Iyer said he does not believe they will lead to his mukti: You have to live out your karma."

Meanwhile, the ashrams, too, are undergoing a shift. People staying longer means friendships are being struck in and outside the ashram, and children are coming to visit elderly parents on birthdays and festivals. Whereas life once stood still for those who had come to die, now the pilgrims say they have established day-to-day routines and are getting involved in the affairs of the ashrams.

Like 89-year-old R. Shastri: if things had gone according to plan, he says he would have died more than a quarter century ago.

Now, he serves as secretary of the Shankracharya ashram. Shastri arrived in Varanasi with his wife 29 years ago; he was 60, she was 48, and thought he had two, maybe three years left.

A toothless Shastri shook his head and said sadly, “I did not think I would cremate over 50 people who died at this ashram." Then he sighed deeply and said, “God willing, it will not be long now."

Standing in the corner, his wife of more than 60 years folded a stubborn cotton sari, refusing to meet anyone’s eyes.

These spaces, where people once came to die, have slowly evolved into old-age homes, a reflection of more children abandoning parents and a lack of adequate elder care across the country, observers say.

Shastri has four sons, who almost never visit him here. “I go to meet them when I miss them," he shrugs. “So it is all right."

Iyer said everyone has their own schedule during the day: praying in the morning, bathing in the Ganga, visiting temples of favourite deities around the ashram and returning to pray in the courtyard temple with pictures of Adi Shankarcharya, a philosopher.

Once or twice a week, the dying hopeful assemble in Iyer’s little room to watch television. “When the Ramayana and the Mahabharata were telecast, we used to watch that. Now, we watch Aastha or Sanskar channel," he said, referring to the spiritual channels.

No Kyunki Saans Bhi Bahu Thi though, he grins, speaking of the popular soap opera.

Indians are living longer now because epidemics and infection are under better control across the country, while there’s also “better awareness of health issues, better nutrition and easy access to medical help," said Dr O.P. Sharma, a geriatrics professor and doctor in the Capital.

Thus, the residents find a way to look after each other in sickness. Among those Shastri and his wife comfort each day: a 98-year-old woman whose legs no longer work, an 80-year-old blind and deaf woman, an 88-year-old man who is so weak that he can no longer sit up on his bed to eat.

Doctors come in when they fall sick, but very serious illnesses are not treated aggressively, said Dr Vishwanath Pandey at Benaras Hindu University.

“There is this thing that in your mind that these people want to die anyway," Pandey said. “In the end, doctors only give medicines for pain and flu."

Iyer says that he and his wife view looking after the dying as their duty and that it will help wash away their own old sins faster. In the process, he said, “we also become very fond of each other. So when someone dies, we do feel a little sad."