New Delhi: US secretary of state Condoleezza Rice urged Pakistan on Wednesday to cooperate “fully and transparently" in investigations into the Mumbai attacks that have roiled India-Pakistan relations.

She also warned that India should ensure its response to Pakistan over the Mumbai attacks does not provoke unintended consequences.

“Any response needs to be judged by its effectiveness in prevention and also by not creating other unintended consequences or difficulties," Rice said at a press conference after meeting India’s external affairs minister Pranab Mukherjee.

India has said most, if not all, the 10 terrorists who rampaged through its financial capital killing 183 were from Pakistan, including one survivor.

“I informed Dr Rice that there is no doubt the terrorists were individuals who came from Pakistan and whose controllers are in Pakistan," Mukherjee said at a joint news conference with Rice. He said India wanted to see that “the terrorists and organizations who perpetrated these attacks are arrested and brought to justice".

Pakistan President Asif Ali Zardari said he doubted the Indian claims that the surviving gunman was Pakistani. Zardari also told CNN’s Larry King Live that he would not accept an Indian demand to hand over 20 terrorists and criminals that New Delhi says are living in Pakistan, saying that if there was any evidence, they would be tried by his country’s judiciary

The captured terrorist told his interrogators that one of the main plotters was a fugitive known to Indian authorities, Yusuf Muzammil, a leader of the Pakistani militant group Lashkar-e-Taiba, according to a senior Indian police official and a Western official. Muzammil’s name figures in India’s list of 20, the Wall Street Journal reported on Tuesday.

The group, though officially banned in Pakistan and which once focused primarily on Indian claims to disputed Kashmir, maintains its leadership in Pakistan and is believed to have moved its militant networks to tribal areas.

Meanwhile, US director of national intelligence Mike McConnell late Tuesday blamed Lashkar-e-Taiba for the deadly attacks in Mumbai, the first time a US official publicly did so. However, he didn’t identify the group by name. 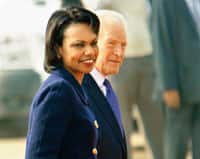 Damage control: US secretary of state Condoleezza Rice with US ambassador to India David Mulford in New Delhi on Wednesday. PTI

India has threatened to pull out of a nearly five-year-old peace process between the nuclear rivals if Pakistan fails to act swiftly against those responsible for the Mumbai blasts. Mukherjee said military action was not being considered but later warned that the peace process was at risk if Pakistan did not act decisively.

Responding to Zardari’s comment that “non-state actors" were behind the Mumbai attacks, Rice said that even if “non-state actors" had carried out the attack, it would still be Pakistan’s responsibility to take “direct and tough action" against them.

In other efforts to ease tensions between India and Pakistan, the top US military commander flew into Islamabad. Admiral Mike Mullen, chairman of the joint chiefs of staff, asked Pakistan to “investigate aggressively" any possible links of groups based in Pakistan to the Mumbai attacks.

On Wednesday, India ratcheted up the pressure on Pakistan, even as the US sought to move quickly to defuse the situation. “India wants peaceful relations with all its neighbours, but this should not be taken as a weakness," Congress party head Sonia Gandhi told an election rally in Jammu and Kashmir.

“The US mediation effort shows that this might just spin out of control unless watched very carefully," Samina Ahmed, the Islamabad-based south Asia project director for International Crisis Group said.

US President-elect Barack Obama is considering asking veteran diplomat Richard Holbrooke to be an envoy focused on the difficult security issues connecting India, Pakistan and Afghanistan, The Washington Post reported. The notion of a heavyweight US envoy to address the Kashmir conflict, as attractive as it might sound in Washington, would be fraught with complications. While Pakistan has long called for an outside mediator to solve the territorial dispute, India has never accepted the idea of an intermediary, insisting it is a bilateral issue with Pakistan.