Bangalore: Santalum ablum, the Indian sandalwood tree, is the source of a fragrance that permeates much of daily life in the country—from bathing soaps to religious practice and even crime.

While there are several indigenous varieties, Indian sandalwood is prized for being the most potent, with 90% content of the active ingredient santalol. In contrast, Australian sandalwood oil has only 38-39% santalol content. Not surprisingly, India dominates production worldwide. Nearly 85% of the supply of Indian sandalwood comes from the southern states of Karnataka, Tamil Nadu and Kerala.

But this statistic masks a crisis that the Indian sandalwood industry has been in the grip of for the past decades. Annual production has fallen from a high of 4,000 tonnes in the early 1970s to less than 300 tonnes today.

And, an Australian company could emerge soon as the largest producer of Indian sandalwood, all of it grown on plantations Down Under.

This could happen as early as next year if things go according to plan for TFS Corp. Ltd, based in Western Australia.

“At this stage, we expect the first harvest to occur in the 2013 calendar year, although we expect only a relatively small harvest of around 50-100 hectares (ha)," said TFS chief financial officer Quentin Megson in reply to an email questionnaire. TFS currently has 25 sq. km of Indian sandalwood plantations. 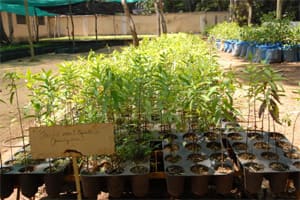 Nine-month-old sandalwood plants which will later be grafted with a host plant at the Institute of Wood Science and Technology in Bangalore.

He declined to quantify this output in terms of weight, but sandalwood experts estimated the sandalwood harvest at 450-900 tonnes, easily outstripping India’s production of 300 tonnes in 2011.

Megson projects TFS will harvest around 50-100ha for the first few years, but from 2020 onwards this will increase to 1,000ha per year. Since 1999, TFS has been developing the largest Indian sandalwood plantation found anywhere in the world.

The company’s interest in Indian sandalwood was an outcome of successful trials by the Australian government in the early 1980s.

Indian sandalwood is a highly adaptable species that grows in varying soil conditions and weather, amid temperatures ranging from 5 degrees Celsius to 50 degrees Celsius.

Indian sandalwood’s dire situation in its country of origin can be attributed largely to government policy.

The decline in domestic production is primarily due to overexploitation and stringent regulations, said H.S. Anantha Padmanabha, a retired official of the Institute of Wood Science and Technology, Bangalore, and a consultant to TFS. There was no move to replenish the tree stock, which tied in with the other reason for the shortage, the complex set of regulations that govern sandalwood in India.

“In the three states with the largest population of sandalwood trees—Karnataka, Tamil Nadu and Kerala—short-sighted policy, some of which goes back to the era of Tipu Sultan, has disincentivized the cultivation of sandalwood," Padmanabha said.

Until 2001 in Karnataka and 2002 in Tamil Nadu, sandalwood trees were the property of the state government, regardless of where they grew. (This is a practice that’s followed for other tree species as well, especially those that are highly valued and dwindling in number because of similar exploitation.) Sandalwood trees can now be owned by planters, but can only be sold to the state forest department.

“Unless the government liberalizes the sandalwood market, there will be no increase in sandalwood cultivation in the southern states," said Padmanabha. “The shortage in Karnataka is so severe that there have been no sandalwood auctions in the state for the past two years."

There is some recognition of this at the government level. State-owned Karnataka Soaps and Detergents Ltd, maker of Mysore Sandal Soap, has launched a Grow More Sandalwood campaign that involves the company entering into agreements with farmers.

It has already signed memoranda of understanding for nearly 2,500 acres of sandalwood cultivation and hopes to sign up more farmers soon, said Venkatesha Gowda, deputy general manager (research and development). Farmers will grow the trees and sell them to the company once they’re ready to be harvested.

Gowda estimates planting 500 sandalwood trees on 1ha over a period of 15 years will cost ₹ 48 lakh. The net profit, at a conservative estimate of ₹ 3,500 for a kg of wood, would be as much as ₹ 2.76 crore. But it will take at least 10-15 years for the sandalwood to be ready for harvesting. Until then, India may have to yield leadership to Australia.