The decline, RIL’s worst showing in nine quarters in percentage terms and in eight quarters in absolute terms, was despite a 40.2% increase in revenue to ₹ 87,480 crore. “The global nature of our businesses and the weakness in economic conditions resulted in reduced earnings in this quarter, particularly in our refining and petrochemical businesses," RIL chairman Mukesh Ambani said in a statement issued after market hours on Friday.

During the December quarter, prices of Brent crude rose 8.27%. Added to this, the rupee depreciated 7.71% against the dollar in the same period, making the commodity more expensive in rupee terms. Most of the crude used in India is imported.

At a board meeting also on Friday, RIL directors approved a share buy-back programme that had been announced on Wednesday. It’s set to be the largest ever such buy-back by an Indian company till date.

The maximum price RIL will pay to buy its own shares from the market has been fixed at ₹ 870 per share, and it will acquire up to 120 million fully paid-up equity shares, or 3.6% of the total outstanding shares. The total size of the buy-back, ₹ 10,440 crore, represents around 7.1% of the company’s total paid-up share capital and free reserves. 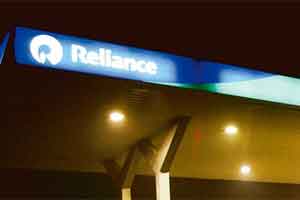 Analysts said investors won’t be too enthused with the terms of the buy-back announced by the company.

The 120 million shares that RIL proposes to buy back was too small an amount compared with the cash on the balance sheet and “won’t be liked by the market", said S.P. Tulsian, an independent Mumbai-based stock market analyst.

The announcement of the buy-back was “carefully timed" by the company to coincide with its results to mitigate any negative sentiment, said Sudip Bandyopadhyay, managing director and chief executive of Destimoney Securities Pvt. Ltd, a Mumbai-based brokerage firm.

Both Tulsian and Bandyopadhyay described RIL’s results as a “disappointment".

Bandyopadhyay concurred with Tulsian on the buy-back price. “The aim may be to put a floor price to the company’s stock price, but the market won’t be enthused on Monday as the quantum of the buy-back isn’t that big and the stock may come under pressure," Bandyopadhyay said.

RIL’s financials for the quarter ended December would have appeared worse, but for other income of ₹ 1,717 crore, which more than doubled from the year-ago quarter.

While the company did not provide an explanation for the increase in the statement accompanying the results, it said that in the nine months ended December, other income rose to ₹ 3,897 crore from ₹ 2,135 crore a year earlier, “primarily due to higher average holdings as well as higher yield on investments".

An Elara Securities (India) Pvt. Ltd earnings preview on 11 January had estimated a sharp rise in other income “due to the cash influx of the BP deal".

In the September quarter, RIL closed a deal to sell a 30% stake in oil and gas assets to the UK-based BP Plc for $7.2 billion (around ₹ 36,220 crore today). BP is expected to help RIL find a solution to the declining natural gas production from the D6 field it operates in the Krishna-Godavari basin off India’s eastern coast.

The company’s overall net operating margins narrowed to 10.7% from 15.4% due to the “base effect" of higher revenue and reduction in operating profit from the “higher-margin" exploration and production business, arising out of lower production of oil and gas and transfer of 30% participating interest to BP in the D6 block, RIL said.

Tulsian said profit was well below his worst-case expectation of ₹ 4,500 crore.

“The upstream oil and gas and petrochemical segments have not spoilt the results as much as the refining vertical," Tulsian said. “It is bound to raise questions in the minds of analysts over RIL’s refining operations in coming quarters as well."

The markets are also unlikely to approve of the high levels of other income on the company’s books, he said. Instead of earning interest income on idle cash, it would be more financially prudent for the company to pay off some of its debt, Tulsian added.

The company’s refining and marketing business was the worst affected in the quarter, posting a 30.8% decline in operating profit to ₹ 1,685 crore. This was despite a 46.1% rise in revenue to ₹ 76,738 crore.

RIL’s gross refining margin (GRM), or the difference between the cost of crude and the price of finished petroleum products, fell 32% y-o-y to $6.8 per barrel during the quarter, slipping below the benchmark Singapore GRM for the first time, as analysts had expected. The Singapore GRM was $8 per barrel for the December quarter.

“Following two strong quarters, the quarter ending December 2011 saw a sharp decline in margins, as lower demand and high product inventories impacted product cracks (spreads)," RIL said in its statement. Petrol and naphtha cracks were especially weak and refining margins in general across the globe were weak during the quarter, it said.

Declining gas production from D6 continued to affect RIL’s exploration and production business, with revenue falling 32.2% y-o-y to ₹ 2,832 crore, and operating profit down 14% in the same period to ₹ 1,294 crore. The company’s gas production for the December quarter came in at 136 billion cubic feet, compared with 147 billion cu. ft in the September quarter, the release stated.

The conglomerate’s petrochemical business was also hit, with revenue declining 24% y-o-y to ₹ 19,781 crore and operating profit dipping 11.2% in the same period.