Thanks for Visiting Mint
You seem to have an Ad Blocker on. Please turn it off in order to continue, or whitelist Mint
HOW TO TURN OFF AD BLOCKER
OR
REFRESH IF YOU ALREADY TURNED OFF THE AD BLOCKER
Home >Home-page >Nairs ring-fence Leela against takeover bid

Mumbai: The promoters of premium hotels company Hotel Leelaventure Ltd are bolstering their defence against a possible takeover bid by ITC Ltd, according to a top company official as well as investment bankers, lawyers and analysts. 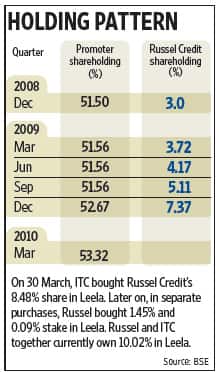 The Nair family has increased its stake in Leelaventure to 53.32% over the past year, after ITC and its fully owned investment arm Russel Credit Ltd began purchasing shares from the market.

ITC owns 10.02% in the company, while the size of the controlling stake held by the Nairs is expected to fall by around 5 percentage points when a foreign convertible bond is converted into equity in April.

Leelaventure told the Bombay Stock Exchange on 6 July its board will meet on 13 July to discuss the issue of preferential warrants to the promoters.

“It is a sort of ring-fencing," conceded Leelaventure’s vice-chairman and managing director Vivek Nair in a phone interview from Kerala. “We always wanted to keep our stake at above 51% and we do not see a takeover threat from ITC Ltd."

A promoter has to make an upfront payment of only 25% of the total value of the warrants and has an 18-month window to convert the rest.

“The company has proposed to the board to issue preferential warrants to maintain our stake above 51% as the stake will fall to 46% after foreign bond-holders convert $66 million (Rs308.88 crore) into equity in April 2011," Nair added.

ITC has also been buying shares of East India Hotels Ltd, which runs the Oberoi chain. The Oberois have brought in Analjit Singh as a white knight in that battle.

An investor buying more than 14.9% in a company must make an open offer for an additional 20%, according to takeover rules.

“The investment in Leela is part of our routine treasury operations and reflects our strategic intent to invest in businesses in which we have knowledge and expertise," said an ITC spokesperson, when asked if his company would ramp up its holding to 15% and make an open offer.

Besides the foreign currency convertible bonds (FCCBs), Leelaventure has a euro bond worth €39.2 million (Rs232.8 crore) due in September.

“We will purchase the euro bond in September with the money we raise from preferential warrants and use the remaining amount to build hotels in Delhi and Chennai," Nair said.

Investment bankers, analysts and lawyers said the promoters have already pledged 46.10% of Leelaventure’s shares. They also noted that the firm had a market value of only Rs1,845 crore on 9 July, largely on account of high debt of Rs2,450 crore at the end of fiscal 2010, and expansion plans that need more capital.

Preferential warrants are the most straightforward way to increase promoters’ stake in case of a takeover threat, said a senior lawyer, who advises companies on takeovers and acquisitions.

While preferential warrants do not carry voting rights, once the promoter stake crosses 55%, they can enter into an agreement with top investors on the board to vote for them in case of a takeover bid in the 18-month window.

“The promoters chose this route as Sebi (Securities and Exchange Board of India) limits share purchase through creeping acquisitions at 5%," said the lawyer, declining to be named because he has a business relationship with Hotel Leelaventure.

Preferential warrants are like an insurance policy to an extent, said an investment banker with a foreign bank, adding that it was a route for firming up control. He did not want to be named.

“It is not unusual for companies to issue preferential warrants to promoters as an alternate means to raise money," said analyst Himani Singh of brokerage Elara Securities. Leelaventure had earlier planned to raise money through a qualified institutional placement (QIP), but that was shelved as the price didn’t match the company’s expectation.

According to an 11 June report by Angel Broking Ltd, the hotels firm has approved a proposal to raise funds of up to Rs750 crore—Rs250 crore through a QIP and the rest from FCCBs—to reduce debt and part-finance expansion plans.

For the fiscal year ended March, Hotel Leelaventure had a net profit of Rs410.2 crore, while the net debt to equity ratio rose to 1.4 from 1.3 in fiscal 2009.

“The aim for ITC now is to enter the premium segment where they are weak," said Singh of Elara Securities. “Leela, its rival, is well positioned, especially in Bangalore and Goa, and this could be something evolving at a later point in time".

Aniek Paul from Kolkata contributed to this story.