Bangalore: Scientists may have moved a step closer to deciphering one of the three oldest languages in the world, that of the Indus Valley civilization by, interestingly enough, making a case that the markings found on artefacts from that era do indeed represent an underlying language and are not random marks.

The language was spoken at least 4,000 years ago in what is now north-west India and the eastern part of Pakistan, and 130 years after the first details of this script came to light and at least 100 failed attempts to decode it, the Indus script remains undeciphered. 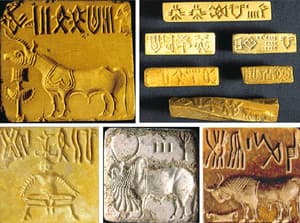 Deciphering: Examples of the 4,000-year-old Indus script on seals and tablets. A team of Indian scientists has found out that the Indus script has a structured sign system showing features of a formal language. JM Kenoyer / Harappa.com

Now, a team of Indian scientists reports in Friday’s issue of Science journal that the Indus script has a structured sign system showing features of a formal language. Using mathematical and computational tools, researchers show that the script has well-defined signs, which begin and end texts, with strong correlations in the order in which the signs appear.

This is the first evidence supporting the hypothesis that the script represents an as-yet-unknown language, say co-authors Nisha Yadav and Mayank N. Vahia from the Tata Institute of Fundamental Research and Centre for Excellence in Basic Sciences in Mumbai.

Other co-authors of the study are Rajesh P.N. Rao, computer scientist from the University of Washington; Hrishikesh Joglekar, a software engineer in Oracle India, Mumbai; R. Adhikari, faculty of the physics department at the Institute of Mathematical Sciences, Chennai; and I. Mahadevan, researcher at the Indus Research Centre, Chennai.

Several artefacts dating to the 2500-1900 BC Indus civilization have been found to contain symbols, but the question hasn’t been definitively answered whether they are just pictograms or have any relation to a spoken language. This time around, the researchers applied techniques of computer science, machine learning in particular, to compare the Indus script patterns to known linguistic scripts as well as to non-linguistic systems such as the human DNA and protein sequences. An artificially created linguistic system such as Fortran, a computer language, was also used for reference.

Among the linguistic scripts, texts of English, Old Tamil, Rig Vedic Sanskrit and of the Sumerian language spoken in Mesopotamia, another civilization that thrived around 4,000 years ago, were used for comparison. What was compared was the permissible randomness in choosing a sequence. It is this randomness, which allows flexibility in composing words or sentences. But even within this randomness, there is always a clear pattern in a script that represents a language. In contrast, DNA sequences are completely random.

The results show that the Indus inscriptions were different from any of the non-linguistic systems, says Rao of the University of Washington. The finding of the study marks a considerable leap from a provocative 2004 paper titled The Collapse of the Indus-Script Thesis that claimed the short inscriptions had no linguistic content, somewhat implying that the literacy of the Harappan civilization was a myth. Its lead author offered a $10,000 (Rs5 lakh) reward to whoever produced an Indus artefact that contained more than 50 symbols.

The new study, indeed, statistically strengthens the assumption that the Indus script represents a language, says Nayanjot Lahiri, professor of ancient history at Delhi university. “The major problem, though, still remains: which language or languages? The script still remains undeciphered, notwithstanding the decades of scholarship that have been invested in trying to find the key to it."

The biggest impediment in the decipherment, according to another historian from Delhi university, K.M. Shrimali, is the fact that no bilingual text has been discovered from that period, which would help calibrate the Indus script. “Unless something comparable to the Rosetta Stone (the bilingual text that helped decipher the Egyptian hieroglyphics) is found, it’s difficult to decipher the Indus script," he says.

Lack of bilingual text certainly makes the problem more challenging, say Yadav and Vahia, but there have been examples in history where scripts have been deciphered without this aid. “While we all hope to find an Indus Rosetta Stone one day, its absence should not prevent us from exploring other means to understand the script."

The present study has been funded by Sir Jamsetji Tata Trust and the Packard Foundation, set up by Hewlett-Packard co-founder David Packard. However, lot more work needs to be done before researchers can convincingly say what the content of the script is and what each sign represents, though the statistical analysis shows a small number of signs account for the majority of the usage.

The team’s work, though, is cut out: to analyse the structure and syntax of the script and deduce its grammatical rules. “We are trying to write the ‘script’ before we can begin reading it," says Yadav.