The rise of Khaitan & Co. is the only change in the Big Six, but the liberalization push and the Amarchand split may soon alter the landscape

If all you care about are the top spots, not much has changed in the rankings of the 40 leading corporate Indian law firms that London-based RSG Consulting has produced since 2008.

Amarchand & Mangaldas Suresh A. Shroff & Co. has been at the top of the rankings since the first report in 2008, with the top six firms, followed AZB & Partners, J. Sagar Associates (JSA), Luthra & Luthra, Khaitan & Co. and Trilegal among the Big Six law firms.

The only real change in RSG’s Big Six pecking order since 2008 has been the rise of Khaitan & Co., which since last year has held the second spot jointly with AZB after having tied for fifth place with Trilegal in 2008, leapfrogging both JSA and Luthra. 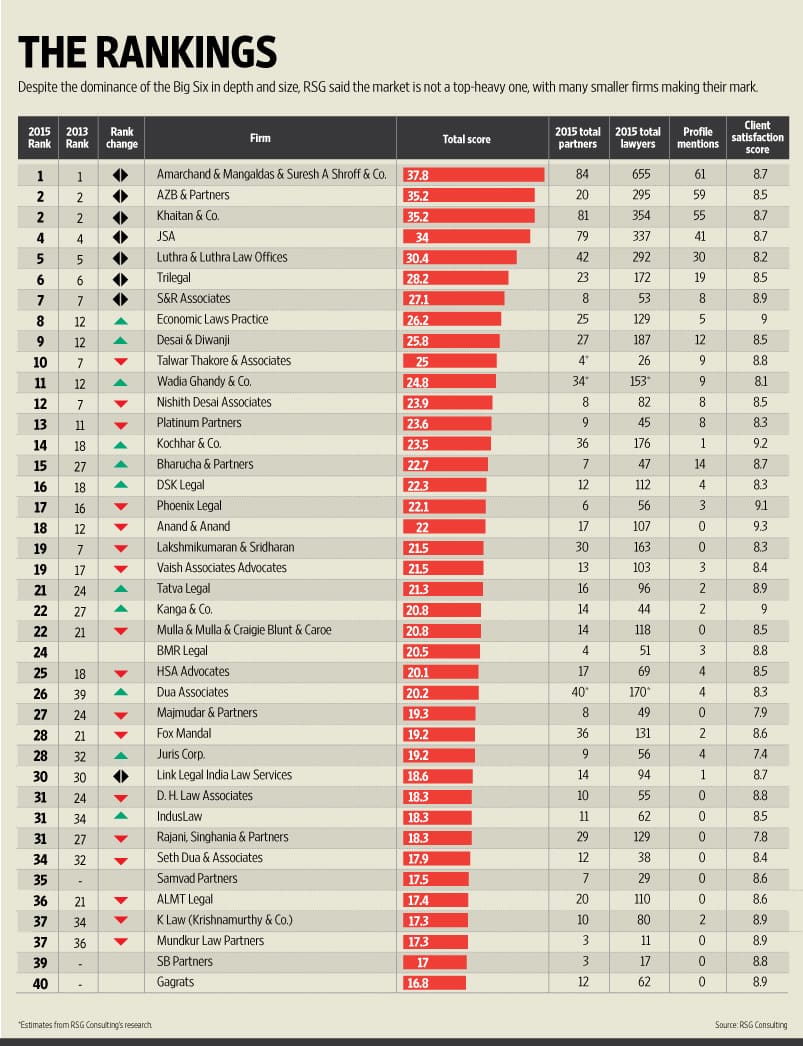 RSG describes the Big Six as “a clear top tier of Indian law firms—a combination of size and capability, and their reputation amongst Indian companies and law firm peers."

The ranking on 35 data sets across four main criteria— capacity, profile, quality of mandates and client satisfaction—is the result of RSG’s survey of over 160 Indian law firms and reviews from over 500 clients.

On the latest rankings, RSG noted: “JSA had a strong year and was more visible than in 2013. However, it was less active on large deals than its top six peers. Luthra & Luthra performs poorly compared to the group on the client satisfaction ratings, but a strong market profile and client base have held the firm in fifth place."

RSG also noted that this was the first year in which a majority of clients called Trilegal a “top tier" rather than “second tier" law firm, though the firm still lagged behind the other five in terms of profile.

Despite the dominance of the Big Six in depth and size, according to RSG “the market is not necessarily a top heavy one, with many smaller firms carving out reputations as top tier in terms of quality".

S&R Associates, which has been in seventh place since 2013, Economic Laws Practice, Desai & Diwanji and Talwar Thakore & Associates round out the rest of the top 10, with the former two having seen significant jumps in the rankings this year.

“The firms which punch well above their weight by size are S&R Associates, Talwar Thakore & Associates, Platinum Partners, Bharucha & Partners and Phoenix Legal", according to RSG. “Each has fewer than 10 partners, and only Phoenix breaks the 50 lawyer mark. Overall, clients express greater satisfaction with these law firms and many international clients say they prefer to use a top quality, smaller firm where they are more likely to receive more senior partner attention."

That said, a lot has happened in the last six months and a lot will happen in the coming year; most notably, Amarchand Mumbai and Delhi, respectively headed by brothers and co-managing partners Cyril and Shardul Shroff, are likely to split in two by next month after lengthy mediation, which has already resulted in aggressive poaching from competing firms.

On the question of how two separate Amarchand firms would fare in the rankings, RSG said that despite the majority of clients rating Amarchand Mumbai and Delhi as a single firm, a “hypothetical ranking on Amarchand as two separate firms and found that, today, the two new firms would share the top spot based on their current figures, client relationships and market profile".

“However," adds RSG, “this may change after a year of operating separately, and we’d expect to see the firms differentiate themselves and their market positions in this period."

Coupled with the government’s recent push to liberalize the corporate legal market to foreign law firms, the map of Indian law firms could end up looking very different in a few years.