OTHERS : Mumbai: Benchmark indices BSE Sensex and NSE’s Nifty 50 rebounded in the afternoon trade on Tuesday led by gains in IT and energy stocks. The Indian rupee edged lower against the US dollar, tracking losses in Asian currencies amid rising US-China trade tensions. Healthcare shares traded lower dragged by Sun Pharma, which was down over 3%. Telecom, auto and metal stocks also remained under selling pressure.“Volatility will continue in the markets given the uncertainty looming over outcome of state elections. Although correction in crude oil prices and rebound in INR vs USD has provided a breather,” said Jayant Manglik, President, Religare Broking Ltd. “Additionally, Q2GDP data this week will help provide further direction to the markets.”In global markets, European shares and US futures edged lower while gains in Asian equities were limited after US President Donald Trump threatened tariff hikes on Chinese goods cast a cloud over prospects for a cease-fire in the trade war with China. Oil prices fell as Saudi Arabia raised oil production to an all-time high in November amid cautious trading ahead of the G20 and Opec meetings. Here are the highlights from the markets:

The BSE Sensex closed 159.06 points, or 0.45%, up at 35,513.14, while the Nifty 50 ended 57 points, or 0.54%, higher at 10,685.60. The BSE MidCap and SmallCap indices rose 0.32% and 0.43%, respectively.Among the sectoral indices on BSE, IT, teck and energy advanced over 1%. Oil and gas, power, finance and realty also gained. On the other hand, Healthcare, metal, telecom, consumer durables and FMCG declined.Infosys, TCS, Reliance, Bajaj Finserv and IndusInd Bank were among the top gainers on the key indices, whereas Sun Pharma, Hero MotoCorp, Yes Bank, Bharti Airtel and Bajaj Auto were major losers. 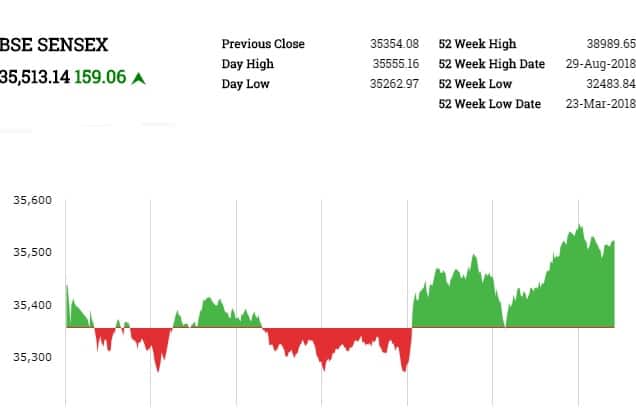 Refinery shutdowns may push India into importing fuel next year

The refiners will have to shut gasoil- and gasoline-making units at their plants for 15 to 45 days to churn out Euro VI-compliant fuels from January 2020https://t.co/RoTcTuv0w1 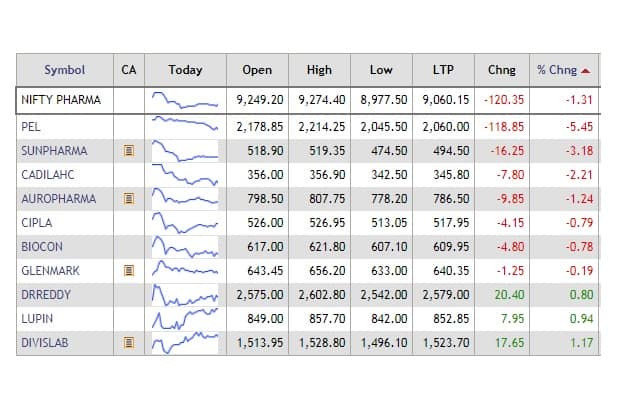 RBI is a seat belt for liquidity, not the driver

American stock futures edged lower with European shares while gains in Asian equities were limited after President Donald Trump’s warning on tariff hikes cast a cloud over prospects for a cease-fire in the trade war with China. Commodities retreated, led by copper. Contracts on the Dow, S&P and Nasdaq were all in the red, while Treasuries and the dollar held steady before the Federal Reserve’s top two officials speak in the coming two days. Equity benchmarks rose in Japan, but were steady in Hong Kong and China, in the wake of signals from Trump that the U.S. is prepared to go ahead with plans for higher tariffs, though a spokesman for China’s foreign ministry said the parties had agreed to reach a deal in a Nov. 1 phone call.Futures on the S&P 500 Index fell 0.1% as of 8:05 a.m. London time. The Stoxx Europe 600 Index declined less than 0.05%. The MSCI All-Country World Index climbed less than 0.05% to the highest in more than a week. The MSCI Emerging Market Index dipped less than 0.05%. Bloomberg 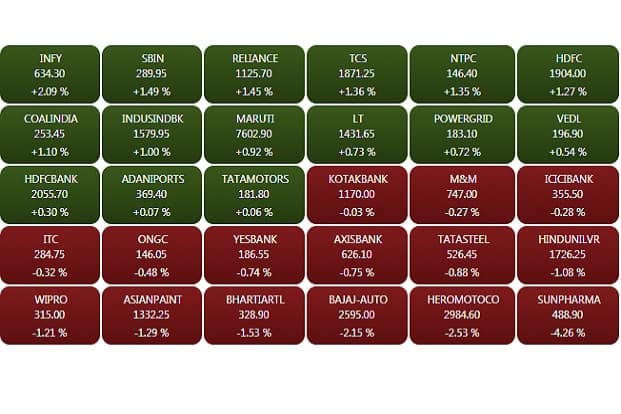 Lupin gets EIR for Tarapur facility, shares up 1%

Lupin said that it has received an EIR from the USFDA with one observation after the regulator completed its inspection at the company’s Tarapur facility in Maharashtra. Lupin shares traded 1% up at Rs 853.20 per share.

Sun Pharma shares erased all morning gains and fell as much 7.05% to Rs 474.65 per share. In early trade, the stock had hit a high of Rs 521.20 per share, up 2% from its last close. Sun Pharmaceutical Industries Ltd on Monday said it has bought Japanese drugmaker Pola Pharma Inc. for $1 million as part of plans to strengthen its global presence in dermatology.

Morgan Stanley said that Indian steel companies’ profitability is at decadal high, and that domestic demand risk and high leverage added to near-term concerns. The brokerage prefers stocks with earnings visibility and strong balance sheets. “Valuations too are at a premium to history for large steel stocks,” said Morgan Stanley.MS cut rating on JSW Steel to ‘underweight’ from ‘equalweight’ with PT cut to Rs 278 from Rs 369. The brokerage cut rating on Jindal Steel and Power to ‘equalweight’ from ‘overweight’, with revised PT of Rs 174 from Rs 314. MS maintained ‘underweight’ rating on SAIL and reduced PT to Rs 53 from Rs 75. However, MS upgrades Coal India to ‘overweight’ from ‘equalweight’ but PT cut to Rs 296 from Rs 306, citing high volume growth visibility with rising coal demand and India’s import dependence. Reuters

Shares of metal companies traded lower as global metal prices extended losses for a third day. The Nifty Metal Index was down nearly 2%, with JSW Steel and Jindal Steel falling over 3%. Tata Steel, Vedanta and Hindalco also declined around 1%.London copper prices extended losses into a third straight session following a report that US President Donald Trump expects to move ahead with raising tariffs on $200 billion of Chinese imports. Three-month LME copper had fallen 0.4% to $6,166 a tonne, extending a 0.3% drop from the previous session. Zinc slipped 1% in London and 1.6% in Shanghai, where it hit 19,930 yuan a tonne overnight, the lowest since Sept. 18. (Reuters) 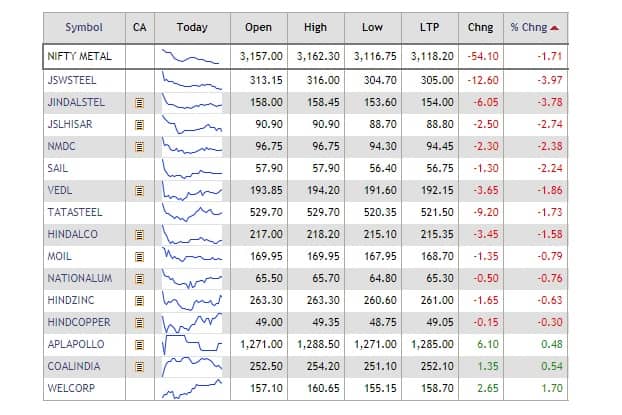 IFCI shares up over 7% on Binani Cements resolution

IFCI shares rose as much as 6.5% to Rs 14.6 after the company said it has received Rs 491.84 crore via NCLT on account of resolution passed by Binani Cements. The company holds 42.16 lakh security receipts the Binani Cements of face value of Rs 1,000 each.

Yes Bank shares rose as much as 3.21% to Rs 194 per share in the opening trade after PTI reported that entities linked to Yes Bank promoter Rana Kapoor have paid ₹200 crore each to Reliance Mutual Fund and Franklin Templeton Mutual Fund from whom they had raised funds by pledging shares. The entities are understood to be linked to the close family members of Kapoor.In other news, Mint reported that the Reserve Bank of India on Monday began inspecting Yes Bank’s exposure to IL&FS, DHFL, Indiabulls Group, and Sudhir Valia-promoted entities Fortune Financial Services India Ltd and Suraksha ARC.

Sun Pharma shares rose as much as 2% to Rs 521.20 per share. Sun Pharmaceutical Industries Ltd on Monday said it has bought Japanese drugmaker Pola Pharma Inc. for $1 million as part of plans to strengthen its global presence in dermatology.

The Indian rupee weakened marginally against the US dollar on Tuesday, tracking losses in Asian currencies after US President Donald Trump said he was ready to expand the trade war with China. At 9.10am, the rupee was trading at 70.99 a dollar, down 0.18% from its Monday’s close of 70.87. The currency opened at 70.87 a dollar and touched a low of 71.01. The 10-year government bond yield stood at 7.747% from its previous close of 7.727%.

Equities in markets such as Turkey, South Africa, Indonesia and South Korea corrected sharply after the recent currency rout. The one-year forward price-earnings (P-E) multiple of the MSCI Emerging Markets Index has corrected from its highs of around 13 times and is currently at around 10 times forward earnings. In relation to developed markets, the valuation differential has widened meaningfully, leading to the double upgrade in EM ratings.Read: EM valuations moderate but Indian stocks still expensive 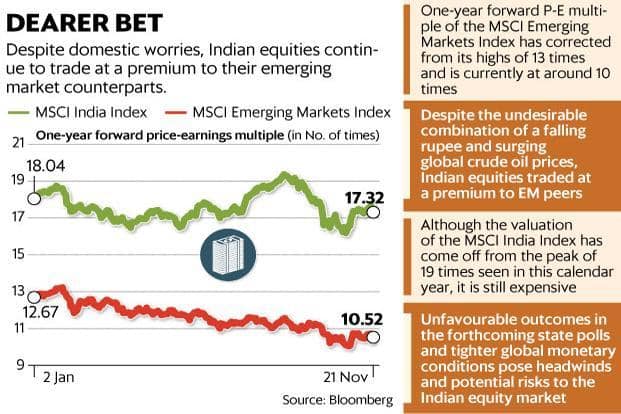 FMCG stocks back in favour as costs beat a retreat

The BSE FMCG index is still down by 9.3% since end-August, but is up by that same rate over its lows of early-October. Some of that is because of the broad market, which is up by 3.4%.

The increase in crude oil prices was a budding thorn in the side of FMCG companies. https://t.co/IElsduK39H

Oil: Record Saudi oil production pulled down crude prices amid cautious trading ahead of the G20 gathering that starts in Argentina on Friday and next week’s OPEC meeting in Austria. International Brent crude oil futures briefly dipped below $60 per barrel before edging back to $60.10 per barrel, still down 38 cents, or 0.6%, from their last close. US WTI crude futures were at $51.21 per barrel, down 42 cents, or 0.8%. Saudi Arabia raised oil production to an all-time high in November, an industry source said on Monday, pumping 11.1 million to 11.3 million barrels per day (bpd) during the month.Gold: Global gold prices inched lower on Tuesday as the dollar steadied amid fears of a slowdown in global economic growth and increasing pessimism due to a likely worsening of U.S-China trade dispute ahead of the G20 meet. Spot gold was down 0.1% at $1,220.81 per ounce. US gold futures were flat at $1,222.2 per ounce.Metals: London copper prices extended losses into a third straight session following a report that US President Donald Trump expects to move ahead with raising tariffs on $200 billion of Chinese imports. Three-month LME copper had fallen 0.4% to $6,166 a tonne, extending a 0.3% drop from the previous session. Zinc slipped 1% in London and 1.6% in Shanghai, where it hit 19,930 yuan a tonne overnight, the lowest since Sept. 18. Reuters