Mumbai / New Delhi: The final chapter of one of India’s most closely tracked corporate lawsuits began on Tuesday, with the country’s apex court stepping in to untangle an almost three-year-old dispute over the output from a prolific natural gas basin. 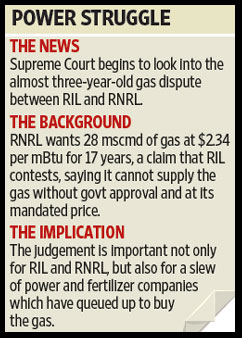 It doesn’t help that the two business houses are owned by estranged brothers—Mukesh Ambani and Anil Ambani—or that the government doesn’t exactly have one view on the issue with the ministries for petroleum and natural gas, fertilizers and power pitching for companies in their respective sectors. And it certainly doesn’t help that the business plans of at least two dozen fertilizer and power companies hinge on how seriously the court takes their status as government-nominated, priority, gas-starved buyers.

The government is the owner of the gas, profit from the sale of which it will share with the producer and operator of the oil and gas block according to terms of a production sharing contract, or PSC.

The apex court has asked both Reliance Industries Ltd, or RIL, controlled by Mukesh Ambani and Reliance Natural Resources Ltd, or RNRL, controlled by his brother Anil Ambani, to reply to the appeals filed by the other by 20 July, when the court will hear the matter again.

Significantly, both companies had opposed the Bombay high court ruling and filed their petitions last week.

At the crux of this legal tug-of-war is gas, a scarce fuel that can fire power plants, fertilizer units, petrochemicals, automobiles and household cooking and heating, at a much lower price than heavier liquid fuels. It also happens to be cleaner. RIL struck a big gas reserve in the D6 block of Krishna-Godavari basin, off the eastern coast of India in 2002—the biggest gas strike in the world that year—and began production of gas in early April this year. At its peak, RIL can produce 80 million standard cubic metres of gas a day (mscmd) though it currently produces 28-30 mscmd.

RNRL, based on an agreement between the brothers Ambani signed in 2005 that ended at least eight months of public sparring by the brothers over control of the Reliance empire, claims it has rights to 28 mscmd of gas for 17 years at a price of $2.34 per million British thermal unit (mBtu).

RIL contests this claim and says it cannot supply gas at a price other than the government-set price of $4.2 per mBtu and to buyers other than those specified in the gas utilization policy.

The gas utilization policy forms the basis on which the government has prioritized allotment of gas, with existing fertilizer units ranking first, followed by existing power, petrochemical and city gas projects. RNRL wants the gas for its greenfield 7,840 megawatt Dadri plant, which is yet to be set up and which will likely figure very low on the government policy.

An analyst tracking the firms for a Mumbai-based brokerage and who does not want to be identified terms the dispute “a royal mess", one that makes him “constantly do and redo my math all the time".

On 15 June, even after the Bombay high court passed its ruling, analysts were predicting appeals to the Supreme Court and were working out possible scenarios on who would win the last round.

The high court had ruled in favour of RNRL asking both the companies to sign a “suitable arrangement" that was in keeping with the so-called family pact, or turn to their mother Kokilaben Ambani for arbitration, or go to the company court to amend the scheme of demerger under which the Reliance empire was carved up between the two brothers.

Several experts ruled out the possibility of a reconciliation. And Union minister for petroleum and natural gas Murli Deora was quoted by Indian news channels as saying that he had met the two brothers, and tried to persuade them to arrive at a settlement but to no avail.

“RNRL is seeking immediate supply of gas to protect its own interest. This situation has arisen because of RIL’s continuous failure to enter into a proper agreement," said RNRL’s counsel Mahesh Agarwal.

RNRL wants to sell the gas it is given by RIL until its power plant comes up, and claims that under the terms of the demerger, the gas supply business had been transferred to the Anil Ambani company. The high court ruling, however, quotes the family pact and says RNRL cannot trade in gas.

RIL, in its recent petition in the Supreme Court, has questioned if “a private memorandum of understanding/family arrangement amongst the members of the promoter family" which has not been approved by board of directors, shareholders or the court, should be interpreted at all as being binding.

RNRL, for its part, was the first to appeal the Supreme Court because it wants the court to arrive at a final decision instead of broadly upholding the pricing and suggesting alternatives to reach a settlement like the Bombay high court has.

Meanwhile, the government isn’t amused by efforts to cut up a national asset according to a private family arrangement. A party to the gas dispute now, its stance will be revealed once hearings begin in the Supreme Court and will be very crucial—maybe, even central—to the outcome.

The importance of the gas in dispute can be gauged from a 24 March report from Goldman Sachs Group Inc. that said that besides doubling domestic gas production, supply from the KG-D6 block will likely “lead to reduction in the oil import bill by $8-13 billion, add $2.5-4.5 billion annually to the exchequer (and) lead to cost savings of $2-$4.8 billion across various industries between 2010-11 and 2013-14".

Union petroleum secretary R.S. Pandey declined comment as the case is before the courts. A top petroleum ministry official who did not want to be identified said: “We are the owner of the gas and RIL is the operator. We have always maintained this. Our ministry along with the law ministry is working to protect the government of India’s interest." This official said “just because our stand goes against Anil (Ambani’s), people perceive that we are in RIL’s favour."

Analysts are unsure if the Supreme Court will value the sanctity of a corporate contract over an issue of national importance. The Supreme Court “typically having a broader perspective of cases, could consider the national significance of D-6 gas project, rather than focusing only on the terms of the RIL-RNRL gas sales agreement," wrote Nilesh Banerjee, Durga Dath and Karthik Bhat, analysts for Goldman Sachs Group Inc. in a 17 June report.

The dispute is also complicated because of an independent but relevant lawsuit between RIL and public utility NTPC Ltd. NTPC and RIL are engaged in a legal battle in the Bombay high court over the terms of gas supply to fuel the expansion efforts at two NTPC plants at Kawas and Gandhar for 17 years at $2.34 per mBtu. While the nature of two lawsuits is different, NTPC’s terms of purchase will apply to RNRL—it was benchmarked so in the same family agreement.

NTPC, however, wants to keep its distance. A top executive from the state-run company, who did not want to be identified said: “This (RIL vs RNRL) is a very complicated case. However, the high court decision over gas supplies has no bearing on us." The power ministry is pitching for NTPC against RIL, an effort that runs counter to the petroleum ministry’s stand.

RIL’s petition to the Supreme Court has challenged the Bombay high court’s ruling that asks it to supply gas to a firm without seeking government approval, asking if those directions had “the effect of setting aside the government policies" and saying that complying with it could lead to termination of its contract by the government.

RNRL, in its petition before the Supreme Court, says that the high court judgement “relates solely to RIL’s share of gas...and does not have any impact on the Government’s share of gas or of its rights and entitlements", implying RIL should give it 28 mscmd at the lower price while paying the government its share that would arise from a sale price of $4.20 per mBtu.

The Supreme Court’s decision, when it is reached, will also affect the fertilizer and power firms that have been identified under the utilization policy. Several of these firms have also signed agreements with RIL. “We will not have any problem as RIL has plenty of gas. It is an internal matter between the two brothers over the price. ...We do not have any fears" over supplies, G.V. Krishna Reddy , chairman and managing director, GVK Power had earlier told Mint. U.S. Jha, chairman of Rashtriya Chemicals and Fertilizers Ltd, said the government had assured it of gas supplies. Over the past seven years, RIL has invested $5.5 billion and built a structure that is effectively a full-scale factory that works 500-2,000ft below sea level.