Rs31,000 cr plan on skills development in the pipeline

Rs31,000 cr plan on skills development in the pipeline

New Delhi: Worried about a growing mismatch between the skills of a young population and the nature of jobs they would be required to fill, the Union government has proposed spending a hefty Rs31,000 crore on skills development over the next five years as part of a National Skills Development Mission, according to a draft of the 11th Plan.

The allocation for skills development in the 10th Plan under the Centrally-sponsored scheme of vocationalization of secondary education was just Rs350 crore.

In addition, the draft Plan also proposes that companies be required to contribute to a skills development fund, to be utilized to develop skills of the socially deprived communities in the country.

The draft Plan document was approved at a meeting of the full Planning Commission on 8 November. It will now be put up before the National Development Council, the apex policymaking body in the country that also includes all the chief ministers.

Data collected in the 60th round of National Sample Survey Organization survey shows that only 3% of the rural youth (15-29 years) and 6% of the urban youth have gone through any kind of vocational training. Citing this, the approach paper to the 11th Plan notes: “For inclusive growth, it is vital to enhance the productivity of labour in the unorganized sector. We need to expand vocational training from the present capacity of a mere two to three million to at least 15 million new entrants to the labour force. While we have 5,000 Industrial Training Institutes (ITIs, under the ministry of labour) and 7,000 vocational schools (under the ministry of human resource development), China has about 500,000 secondary vocational schools." 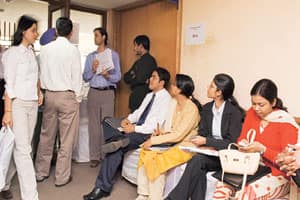 The government is worried about a growing mismatch between the skills of the youth and those required for available jobs.

“The PPP model has not been successful till now, but it is very critical for the future," said D.K. Joshi, director and principal economist at ratings firm Crisil Ltd. “The government has huge commitments in infrastructure, health and education, but it doesn’t have enough resources. So a way has to be found to make this model work."

The lack of skilled people “is a failure of government policy", he said. “They should have foreseen it and now have to proactively step in," he added.

According to that report, 53% of employed youth in this country suffer from some degree of skill deprivation while only 8% of youth are unemployed. It also said that 57% of India’s youth suffer from unemployability.

Apart from the mission, the 11th Plan also proposes to create a National Skill Development Fund, which will impose a universal skill development obligation on industry to invest in skill development of the socially excluded sections, minorities and other candidates from families below the poverty line, as a contribution to affirmative action.

In addition, it recommends setting up a National Skills Inventory and a database for Skill Deficiency Mapping, which will facilitate tracking of careers, placement and exchange of information between employers.

The Planning Commission attributes the problem of a skill-deprived workforce to poor infrastructure, ill-equipped classrooms, laboratories and workshops, non-performing faculty and absence of measurement of performance and outcomes.

While industry has been complaining about the quality of training at the ITIs, some sections within it have already initiated efforts to revamp them.

“There is nothing wrong with the talent that goes into an ITI but the problem is that even after two years of training, the students still are unemployable," said Harmeet Singh Sethi, director and head, skills development, Confederation of Indian Industry (CII), an industry lobby.

CII has a plan to adopt 147 ITIs across the country. According to it, members of CII will partner with states with an aim to change courses and improvise new ones to better serve the industry needs. “Under this, the Centre, after it approves a development plan, will release funds directly to the institute management committee, which will provide more flexibility and authority," Sethi added.