New Delhi: The organizing committee of the Commonwealth Games (CWG) has floated 19 tenders for which the bidding deadline varies from as few as two days to a maximum of 21 days.

This is against the normal practice of giving at least 30 days for bidding.

The haste displayed by the organizing committee, with only 73 days to go for the Games to get off the blocks on 3 October, has provoked critics to argue that it reflected poor management and would hamper adequate oversight of the bidding process.

The tenders over the last month invite bids for setting up operations of various retail stores in the Games Village, supply of recreational games equipment on rent, supply of souvenirs, and agencies for operating food and beverage stalls at all CWG venues.

“Normally, they are supposed to give 15-30 days for any bidding as one needs to give time for assessing the process and calculating the price for a competitive bid," said E.A.S. Sharma, former secretary, expenditure, in the government of India. “When you squeeze it, people will quote unrealistic costs and once they get it, they will take their own sweet time to do the work as the government is in desperation. There will be cost overrun and time overrun," Sharma said over phone from Hyderabad. 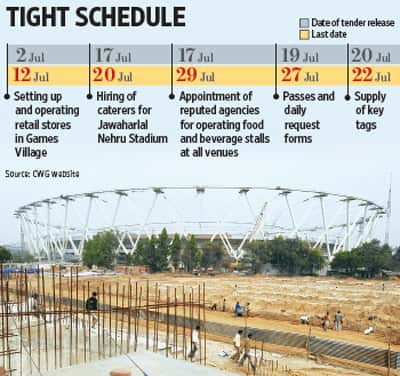 Jarnail Singh, chief executive officer of the CWG organizing committee, denied these charges on Thursday. “It’s not true. Whoever is coming up with the lowest bid, will get it. You cannot manipulate it," he said.

Singh, who admitted that a minimum time of 21 days would be required, sought some more time to respond to Mint’s query on why the tendering process had such short deadlines.

Within an hour Singh reverted, saying that now he was seized of the problem and he was advising an extension of the deadlines. “Three days are just very short. I have asked them to increase it," he said.

Singh said the tender inviting bids for caterers for the Jawaharlal Nehru Stadium—the main venue—is for serving packed food to spectators, and for around 40,000 volunteers across venues.

According to Singh, the committee has decided to float a fresh request for proposal (RFP) for selecting caterers for the 19 venues; this decision taken on Thursday follows after the committee cancelled the selection, effected in May, of the six firms as caterers in its 11 venue clusters.

This would be the second time that the organizing committee is cancelling an RFP, as reported by Mint on 18 February.

The 17 sports to feature in the XIX Commonwealth Games 2010 Delhi will be held at six venue clusters and five stand-alone venues in the Capital.

According to a person who is familiar with the process, but did not want to be identified, there have been differences of opinion in the organizing committee over handing out contracts to caterers. While a section argued that different caterers should be engaged, others point out that too many caterers would make coordination and the process of ensuring food security a tougher job at the last minute.

Even for supply and installation of fitness equipment, where there could be tough competition among bidders, the organizing committee released the tender invitation on 8 July and the deadline was on Thursday.